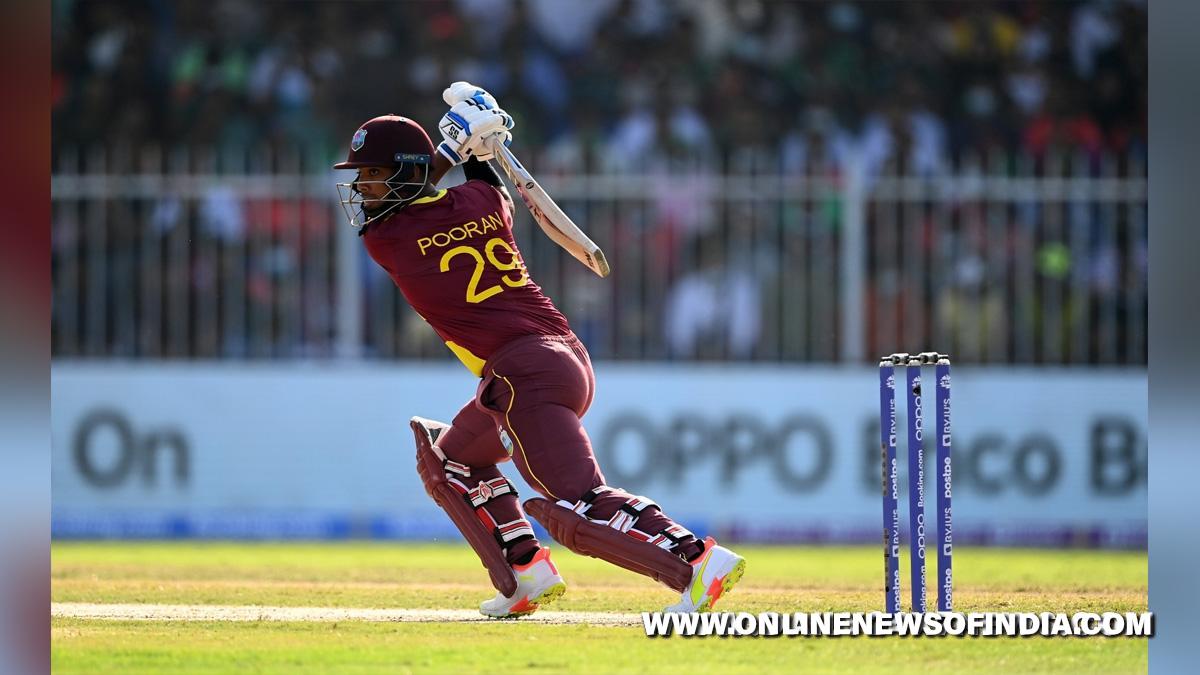 Sharjah : A late cameo from Nicholas Pooran (40 off 21) followed by a superb defence by the bowlers meant that West Indies edged Bangladesh by three runs in a Group 1 match of the ICC Men’s T20 World Cup at the Sharjah Cricket Stadium here on Friday. With this win, the defending champions have stayed alive in the competition while Bangladesh stare at an early exit.In a nail-biting match, where fortunes swung as a pendulum and fielders faltered on many occasions, West Indies managed to come out on top, thanks to some fiery knocks from the lower-order batsmen and bowlers using their experience, something which Bangladesh lacked. In response, to West Indies’s 142/7, Bangladesh were restricted to 139/5 in 20 overs.Chasing 143 for victory, Bangladesh lost openers Shakib Al Hasan and Mohammad Naim in successive overs of the power-play. While Shakib, opening for the first time in T20Is, chipped to mid-on after a leading-edge off Andre Russell, Naim chopped on to his stumps off Jason Holder.Soumya Sarkar and Litton Das stitched a stand of 31 runs for the third wicket. But Akeal Hosein forced a leading-edge off Sarkar, pouched by a diving Chris Gayle at short third man. Mushfiqur Rahim fell cheaply, bringing out the scoop against Ravi Rampaul but missed the slower delivery, which hit the stumps.

Das along with Mahmudullah kept the scoreboard ticking to bring the equation to 30 runs off the last three overs. Dwayne Bravo was hit for a six by Mahmudullah in the 19th over but took out Das, holing out to long-on, on the final ball of the over. Andre Russell defended 13 in the final over, nailing his yorkers despite a misfield and a dropped catch to keep West Indies alive in the tournament.Earlier, West Indies lost Evin Lewis on the final ball of the third over, flicking a top-edge to backward square leg off Mustafizur Rahman. The defending champions were dealt with another blow in the power-play as Chris Gayle was bowled through the gate by Mahedi Hasan. Post-power-play, Hasan had his second wicket of the match as Shimron Hetmyer holed out to long-off.With only two boundaries coming at the halfway stage, captain Kieron Pollard retiring out increased further trouble for the West Indies. Russell walked in but was run out at non-striker’s end as the ball coming from a Roston Chase straight drive ricocheted off pacer Taskin Ahmed’s boot before hitting the stumps.Pooran and Chase (39) stitched a 57-run partnership to give late impetus to the West Indies innings. The duo took 14 off the 15th over from Rahman before Pooran smoked back-to-back leg-side sixes off Shakib Al Hasan in the 16th over. Pooran went on to smash Hasan for two down the ground sixes in the 18th over.Shoriful Islam took out both Pooran and Chase on successive deliveries to sink West Indies further. Rahman’s final over saw him take out Bravo before Holder smacked him for back-to-back sixes on the leg-side. Pollard walked out and ended the innings in style, hitting Rahman for a six to help his team cross the 140-mark, which proved to be enough at the end.
Brief scores: West Indies 142/7 in 20 overs (Nicholas Pooran 40, Roston Chase 39, Shoriful Islam 2/20, Mahedi Hasan 2/27) against Bangladesh 139/5 in 20 overs (Litton Das 44, Mahmudullah 31 not out, Jason Holder 1/22, Akeal Hosein 1/24) by three runs

T20 WC: If Pakistan win toss, they should look to bat first : Inzamam-ul-Haq