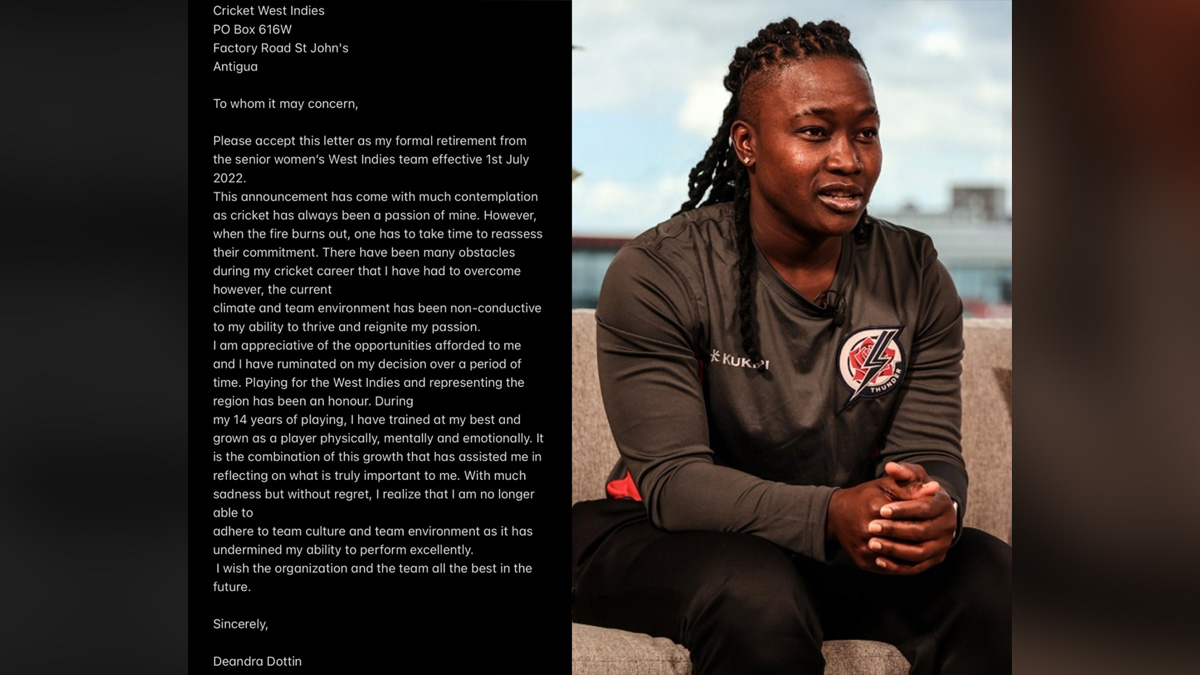 Birmingham : West Indies star all-rounder Deandra Dottin on Monday announced her international retirement, with the veteran of 143 WODIs and 126 WT20Is citing concerns of team culture for the sudden decision.

The 31-year-old all-rounder took to social media to make the announcement in Birmingham, where she is with the Barbados team for the Commonwealth Games.

In her statement, addressed to Cricket West Indies (CWI), Dottin said organisational issues were responsible for her decision.The cricketer, however, said she was looking forward to playing domestic cricket around the world.

“Thanks to all for the love and support with in my past 14 years of playing cricket for West Indies! I look forward to be playing domestic cricket around the world,” said Dottin on Twitter.

This announcement has come with much contemplation as cricket has always been a passion of mine. However, when the fire burns out, one has to take time to reassess their commitment,” the post read.”There have been many obstacles during my cricket career that I have had to overcome.

However, the current climate and team environment has been non-conductive to my ability to thrive and reignite my passion.”I am appreciative of the opportunities afforded to me and I have ruminated on my decision over a period of time.

Playing for the West Indies and representing the region has been an honour. During my 14 years of playing, I have trained at my best and grown as a player physically, mentally and emotionally. It is the combination of this growth that has assisted me in reflecting on what is truly important to me.

With much sadness but without regret, I realise that I am no longer able to adhere to team culture and team environment as it has undermined my ability to perform excellently,” she added.Dottin has played in more than 260 internationals across the two white-ball formats, scoring in excess of 6,000 runs and taking over 130 wickets.

The all-rounder was at her best at the ICC Women’s Cricket World Cup earlier this year in New Zealand, showing nerves of steel to close out the tournament opener against the hosts with the ball, before taking one of the greatest catches in any global tournament against England to remove Lauren Winfield-Hill with a full stretch dive to her left.

The right-hander retires as the second-highest run-scorer for the West Indies in both women’s ODIs and T20Is, and fourth on the wicket-takers list for the side in the shorter format, according to ICC.

Dottin will likely continue to play in the Commonwealth Games campaign, with the Caribbean side set to take on India in a do-or-die group clash on Wednesday.