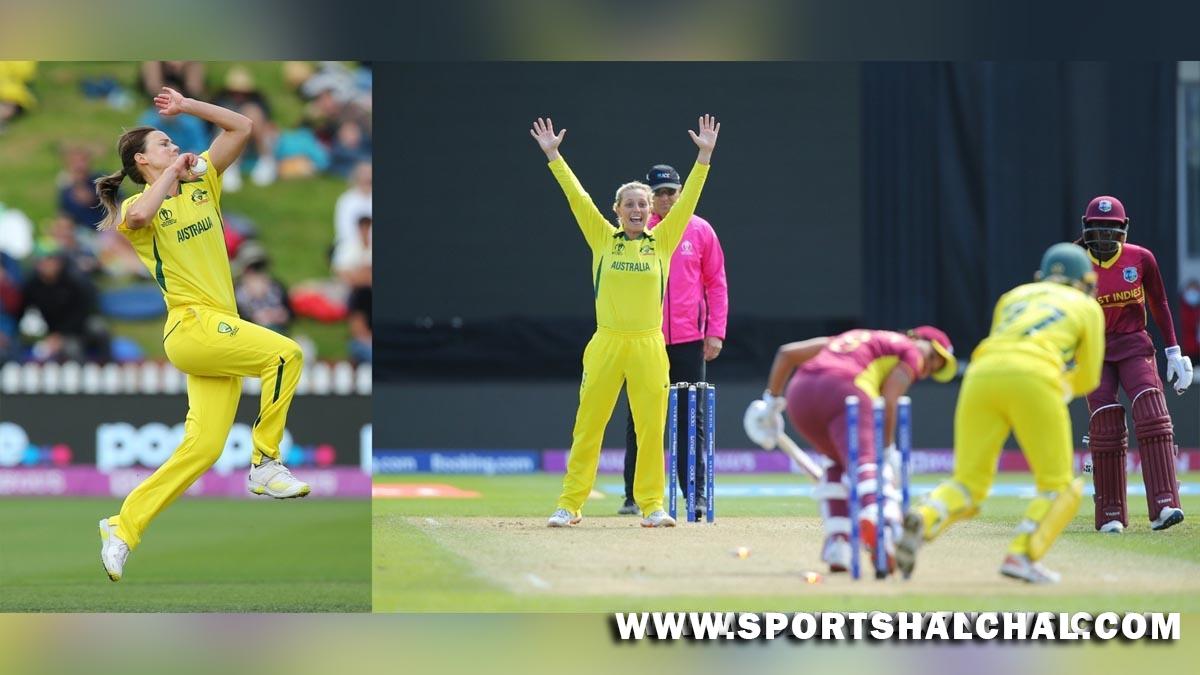 Wellington (New Zealand) : Australian bowlers Ellyse Perry (3/22) and Ashleigh Gardner (3/25) ran through the West Indies batting line-up, while top-order batter Rachael Haynes smashed a 95-ball unbeaten 83 as the six-time champions won their ICC Women’s World Cup match against the Stafanie Taylor-led side with remarkable ease at the Basin Reserve here on Tuesday.The performance by the Australian trio helped Australia win by seven wickets with 118 balls remaining as the side maintained its unbeaten status in the tournament.Thanks to Perry and Gardner’s efforts, the Courtney Walsh-coached West Indies were bundled out for just 131 in 45.5 overs. In reply, Haynes’s blistering half-century was enough to guide Australia to a big win in 30.2 overs.While Perry picked up two wickets in her first over and three during a magnificent opening spell, the West Indies showed glimpses of the form that helped them to upset victories over hosts New Zealand and England at the start of the tournament. While captain Taylor (50) led the way with the bat, Hayley Matthews (1/31 and three standout catches) excelled in the field.But the difference in class was too stark, as Australia made it four from four at the event and extended their lead at the top of the tournament standings.The West Indies remain in fifth place and will need to win at least two of their remaining three fixtures to progress to the semifinal stage.While Perry’s opening spell set the tone for a dominant Australian performance, she received good support from spinners Ashleigh Gardner and Jess Jonassen (2/18) throughout.

Perry had the ball swinging both ways, with Matthews (0) and Kycia Knight (0) falling consecutively to excellent deliveries as West Indies were reduced to 4/2 in the second over.Taylor, who won the toss and elected to bat after rain delayed the start of the match, safely negotiated the hat-trick delivery and set about building a partnership with the in-form Deandra Dottin.But Perry once again stepped up to the plate to dismiss Dottin for 16, with Australia skipper Meg Lanning holding on to a sharp catch at slip to make it 34/3 after 10 overs.Taylor and wicketkeeper Shemaine Campbelle tried to recover, but Gardner got in on the act with two quick wickets to leave West Indies in big trouble at 78/5 at the midway point of their innings.With Taylor still at the crease there was still hope West Indies could post a competitive total, but Gardner intervened to trap the skipper LBW and Jonassen chipped in with two late wickets as Australia took complete control.Alyssa Healy (3) and Lanning (0) fell early in reply to give West Indies a glimmer of hope, but Perry joined Haynes at the crease and the duo batted within themselves to post a 50-run partnership.Perry wasn’t able to bat all the way through to the required total as she fell to Matthews’ third catch and the bowling of Chinelle Henry (1/20), but Beth Mooney (28*) was on hand alongside Haynes to ensure Australia cruised home.
Brief scores: West Indies 131 in 45.5 overs (Stafanie Taylor 50; Ellyse Perry 3/22, Ashleigh Gardner 3/25, Jess Jonassen 2/18) lost to Australia 132/3 in 30.2 overs (Rachael Haynes 83 not out, Beth Mooney 28 not out) by seven wickets.