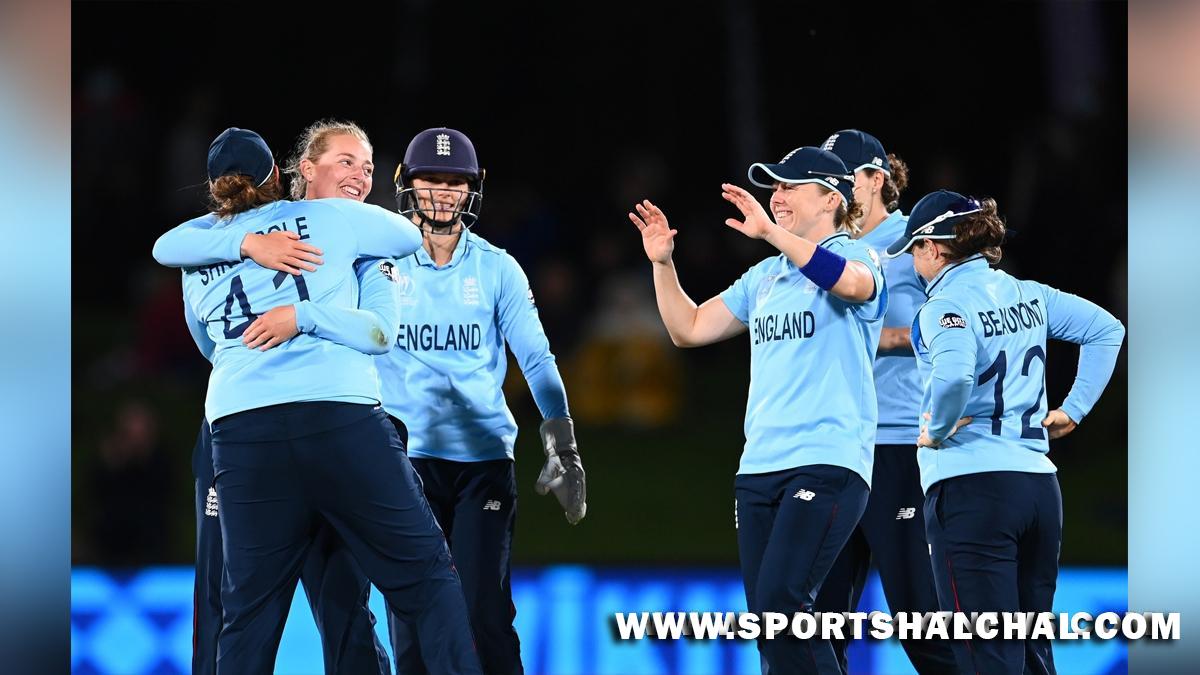 Christchurch : On the back of a magnificent 129 from opener Danni Wyatt and a career-best 6/36 by left-arm spinner Sophie Ecclestone, defending champions England on Thursday reached the final of ICC Women’s Cricket World Cup with a superb 137-win over South Africa at Hagley Oval. It continues the remarkable upward swing of England, who began their title defence with three losses but fought back to win next five matches in a row, including Thursday’s semi-final, to storm into their second straight World Cup final. They will now meet Australia in the final at the venue of their semifinal win on Sunday. Chasing a mammoth 294 in a high-pressure knockout match, South Africa were never in the chase from the word go. Pacer Anya Shrubsole removed both openers, Laura Wolvaardt and Lizelle Lee, cheaply in her first two overs. Wolvaardt, the leading run-scorer in the tournament, departed without troubling the scorers, chipping a Shrubsole inswinger straight back to her.

Lee, in a lean run throughout the tournament, chipped another inswinger from Shrubsole straight to mid-wicket. Lara Goodall and captain Sune Luus tried to resurrect the South Africa innings. But England struck back as Kate Cross cleaned up Luus while Goodall tried to scoop against Charlie Dean, but the ball shattered her stumps. From 67 for 4, Ecclestone ran through the rest of the batting line-up with all six wickets as South Africa crumbled to 156 all out in 38 overs. Earlier, England posted an imposing 293/8, thanks to Wyatt’s knock laced with 12 boundaries. She had plenty of luck on her side as she was dropped five times in the innings (22, 36, 77, 116 and 117), including twice in an Ayabonga Khaka over. The reprieves meant Wyatt took the attack to South Africa’s bowlers and put their usually tight fielders under pressure in a rematch of a thrilling 2017 World Cup semi-final. Wyatt also stitched handy partnerships with Sophia Dunkley (60) and Amy Jones (28) during the middle overs as England gained the upper hand in a match which will decide who will meet Australia in the final on Sunday.

For South Africa, their experienced pacers Shabnim Ismail (3/46) and Marizanne Kapp (2/52) did well. But England and Wyatt in particular scored big against South Africa’s other bowling options. Kapp provided South Africa the best start when she dismissed opener Tammy Beaumont (7) with the score on 10, before skipper Heather Knight joined Wyatt and the duo set about resurrecting England’s innings. While Knight was overly cautious at the crease, Wyatt attempted to attack and Kapp provided her with a lifeline when she dropped an easy chance in the field. Khaka (1/66) trapped Knight lbw for one after taking a late review to add to England’s woes and it was 77/3 shortly after when Nat Sciver fell to Ismail for just 15. Wyatt and Jones then put on 49 for the fourth wicket, until Kapp was introduced back into the attack and picked up her second when Chloe Tryon hung on to send Jones back to the pavilion. Dunkley, with her second successive fifty in as many matches in the World Cup, proved to be the perfect partner for Wyatt as the duo combined for a 116-run stand that set England on course for a big score to set up a stiff chase for South Africa, which eventually was enough in the end to reach their sixth Women’s Cricket World Cup final.
Brief Scores: England 293/8 in 50 overs (Danni Wyatt 129, Sophia Dunkley 60; Shabnim Ismail 3/46, Marizanne Kapp 2/52) beat South Africa 156 all out in 38 overs (Mignon du Preez 30, Lara Goodall 28; Sophie Ecclestone 6/36, Anya Shrubsole 2/27) by 137 runs