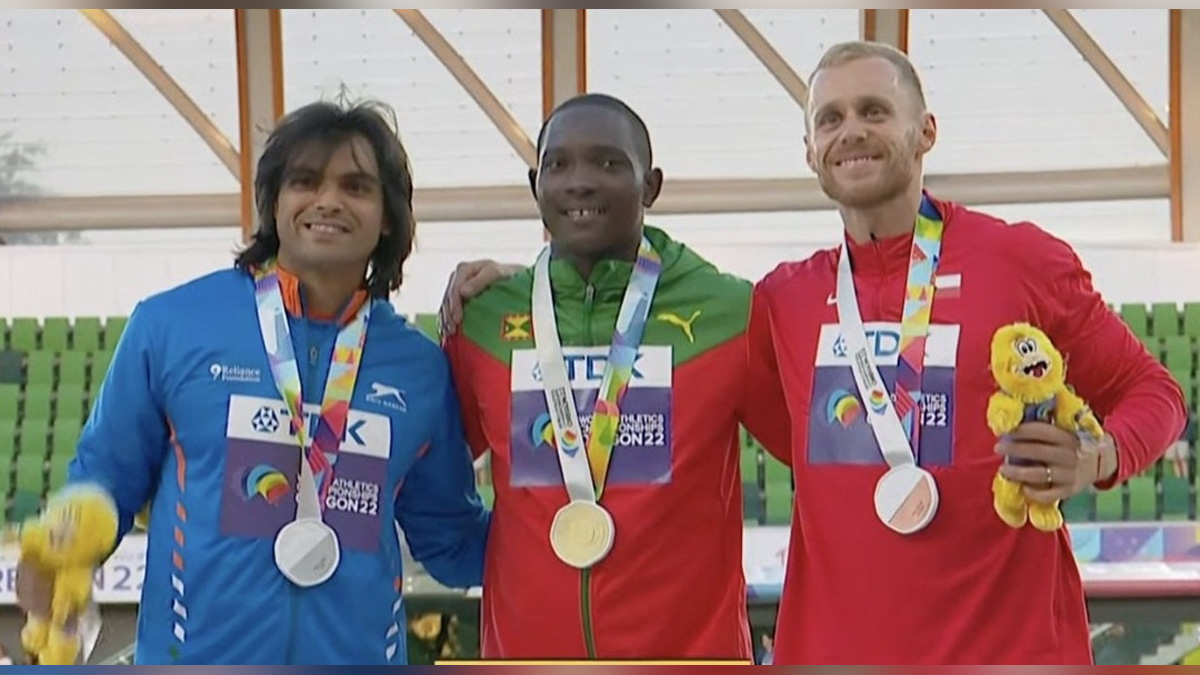 Eugene (Oregon) : Tokyo Olympics javelin throw champion Neeraj Chopra on Sunday (IST) ended India’s 19-year-long wait for a medal at the World Athletics Championships after he clinched the silver medal at the 2022 meet with historic throw of 88.13m.

This was India’s second medal at the World Championships and the first podium finish since Anju Bobby George won a bronze medal in long jump at Paris in 2003.

Chopra’s best effort of 88.13m in the final at the Hayward Field was short of Anderson Peters’ gold medal-winning mark of 90.54m while Tokyo 2020 silver medallist Jakub Vadlejch won the bronze with 88.09m.

The 24-year old Indian, who made the cut for the Oregon 2022 men’s javelin throw final courtesy an 88.39m mark in the qualification, made a disappointing start with a foul. On the other hand, reigning champion Peters of Grenada set the benchmark high with a 90.21m attempt in his first throw of the final.

Needing to shatter his personal best and the national record of 89.94m, set at the Stockholm Diamond League last month, for a shot at gold, Neeraj posted 82.39m and 86.37m with his second and third attempts, respectively. However, he was still short of a medal position after the third series of throws.

The Indian nevertheless, ensured three additional throws to try and climb back into a medal position as he was placed fourth after Round 3. The bottom four drop out after the first three throws.

Meanwhile, Peters extended his lead at the top with a 90.46m mark in his second attempt. Chopra finally climbed up into the top three with an 88.13m fourth attempt which saw him leapfrog the Czech Republic’s Jakub Vadlejch and Germany’s Julian Weber into the silver medal position.

The Tokyo Olympics champion fouled his fifth and sixth attempts but had done enough to win India its maiden silver medal at the World Championships.

Peters breached 90.54m with the final throw to increase his margin of victory and became the first man since the legendary Jan Zelezny to successfully defend a men’s javelin throw crown at the World Athletics Championships.

It was only the fifth time that the javelin throw final was won with a 90m-plus throw in the 18 editions of the World Championships.Another Indian javelin thrower Rohit Yadav finished 10th with a best attempt of 78.72m, which came in his third attempt. His two earlier attempts measured 77.96m and 78.05m.