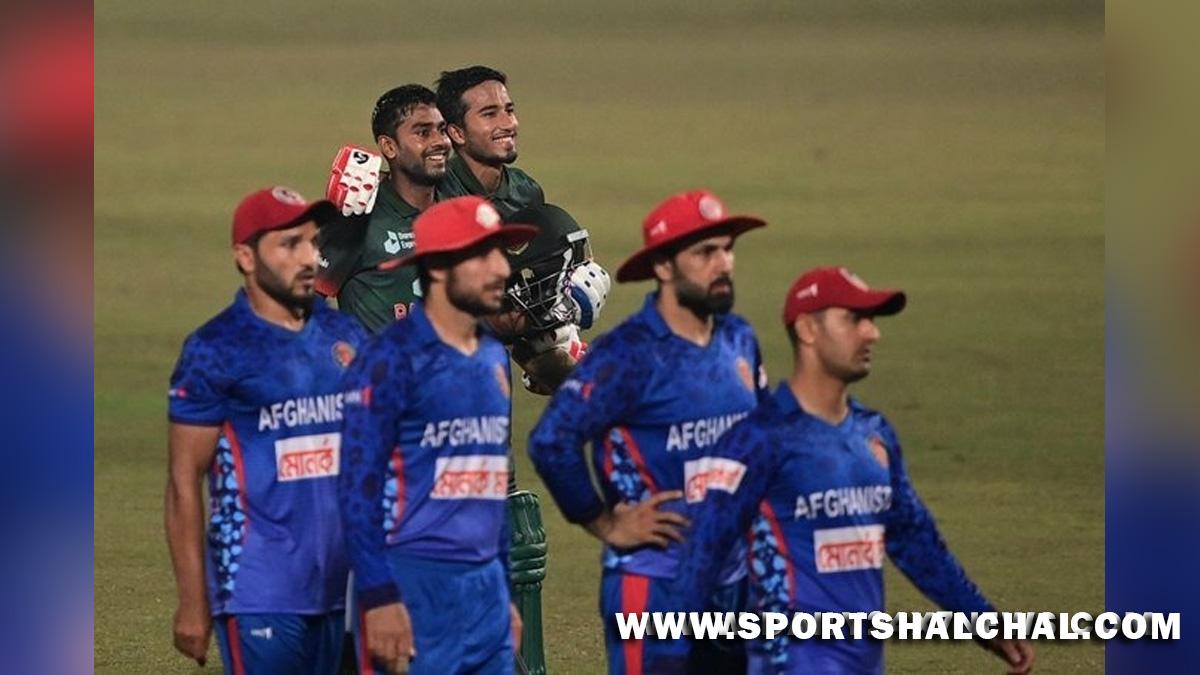 Chattogram : A dreamy and record partnership between Afif Hossain and Mehidy Hasan led Bangladesh to a sensational four-wicket win over Afghanistan in the first ODI of the three-match series, here on Wednesday.Afghanistan had reduced Bangladesh to 45/6 in 11.2 overs in the run chase, but Afif and Mehidy stitched an unbeaten 174 run partnership to guide their side to a historic victory. It was also the second-highest partnership for the seventh wicket in men’s ODIs cricket.With this victory, Bangladesh consolidated their second position on the ICC Men’s Cricket World cup Super League standings, sitting comfortably with 90 points, only behind England.Chasing 216, Bangladesh got off to a shocking start. Fazalhaq Farooqi started the onslaught with a double-wicket over, sending the hosts’ openers Tamim Iqbal (8) and Liton Das (1) back to the hut in the third over.

The Afghanistan pacer repeated the feat in his next over as he sent back two more Bangladesh batters. He trapped the experienced Mushfiqur Rahim in front for 3 on the first ball of the fifth over, and struck again on the last ball of the over with the wicket of Yasir Ali, who walked back without getting off the mark.Bangladesh were 18/4 in five overs. Nothing was going the hosts’ way as they soon lost the prized scalp of Shakib Al Hasan when Mujeeb Ur Rahman had him bowled for 10. They lost another big wicket, with Rashid Khan claiming his first wicket of the match, sending Mahmud Ullah back for 8.At 45/6 in just 11.2 overs, Bangladesh were in deep trouble but the two new batters Afif and Mehidy had other plans. Slowly, steadily and then all at once they took the game away from Afghanistan.The duo stitched a match-defining century partnership, with Afif making an impressive 93 not out from 115 while Mehidy contributed with a gritty 81 not out from 120 balls.Earlier, Afghanistan won the toss and opted to bat first.

They lost their opener Rahmanullah Gurbaz early in the third over with Mustafizur Rahman drawing the first blood for Bangladesh. In an attempt to go big, the Afghanistan opener skied the ball towards mid-on where Tamim completed the catch comfortably.Ibrahim Zadran and Rahmat Shah then batted with caution and steadied the innings. After settling in at the crease, Ibrahim struck Taskin Ahmed for a six and a four on back-to-back balls. Shah also struck a couple of fine boundaries off Shakib. Their 45-run partnership came to end when Shoriful Islam struck in the 14th over to remove Ibrahim for 19.After a few overs Shah also fell for 34 while Afghanistan skipper Hashmatullah Shahidi fell after making 28 from 43. Bangladesh bowlers kept the tourists’ batters in check, with regular wickets. It was Najibullah Zadran who played a crucial knock for Afghanistan. He stayed at the crease till the 48th over, top-scoring for his team with 67 runs from 84 balls.Mohammad Nabi (20) and Gulbadin Naib (17) were the other two batters to have made runs in double-digits as the rest of the lineup crumbled.
Brief scores: Afghanistan 215 in 49.1 overs (Najibullah Zadran 67; Mustafizur Rahman 3-35) lost to Bangladesh 219/6 in 48.5 overs (Atif Hossain 93 not out, Mehidy Hasan 81 not; Fazalhaq Farooqi 4-54) by four wickets.