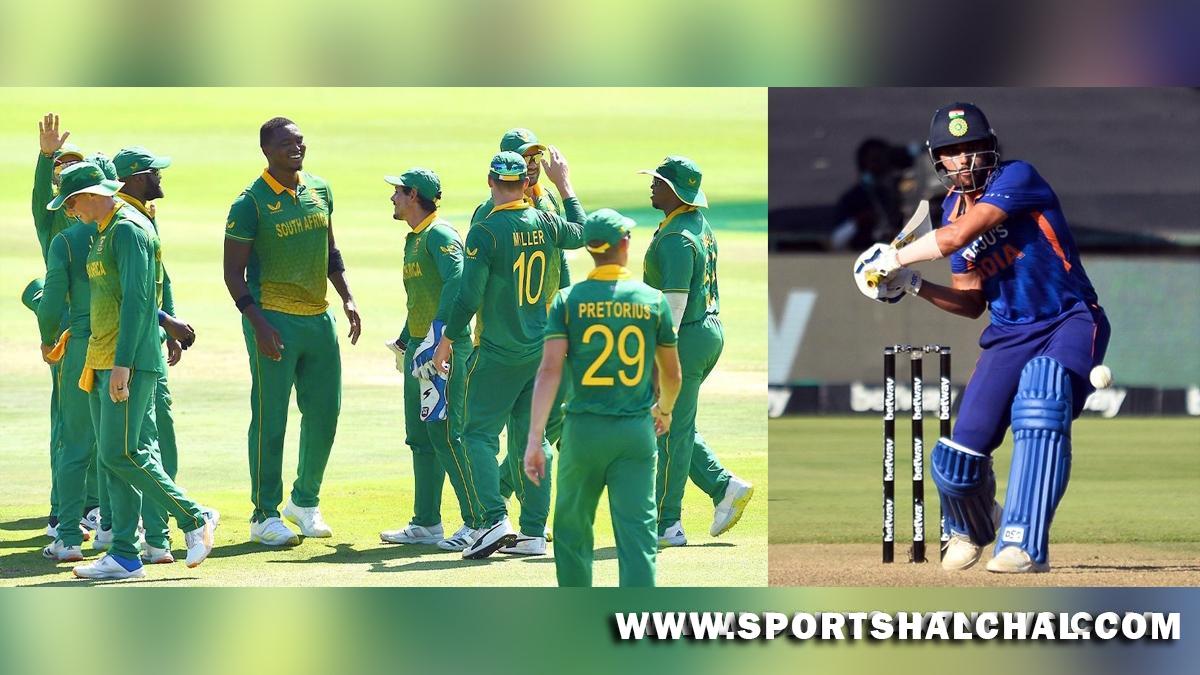 Cape Town : Deepak Chahar’s fighting fifty (54 off 34) went in vain as South Africa completed a hat-trick of wins with a four-run victory in the thrilling third and final ODI to seal a 3-0 series whitewash against India, here on Sunday.A fantastic century by Quinton de Kock (124 off 130) helped South Africa post a challenging 287 in 49.5 overs. Apart from de Kock, Rassie van der Dussen (52 off 59) and David Miller (39 off 38) also played vital knocks for the Proteas.In reply, Shikhar Dhawan (61 off 73) and Virat Kohli (65 off 84) played important knocks but India were in deep trouble at one point after losing quick wickets during middle overs. However, Deepak Chahar’s knock under pressure ignited hopes and kept India in the game till the time he was at the crease.When Chahar was dismissed in the first ball of the 48th over, India needed 10 runs to win off 17 balls and had two wickets in hand. But South Africa sent back Jasprit Bumrah in the penultimate over and in the last over, with six needed off six balls, Yuzvendra Chahal;s slog found the top edge and South Africa closed off the game with a nervy four-run victory.

With this, KL Rahul became the first Indian captain to lose each of the first three ODIs in charge.Chasing a stiff target, India were off to a poor start as captain KL Rahul (9) got out in the 5th over. Lungi Ngidi bowled a ball outside off and Rahul pushed his bat away from his body for a thick outside edge and the catch was taken at first slip by Janneman Malan, leaving visitors at 18/1.Virat Kohli then joined Shikhar Dhawan at the crease and used his wrists to get off the mark with a stylish boundary. After losing Rahul early, Dhawan and Kohli need to forge a solid stand to bail India out in the run chase.Dhawan who looked in solid touch hit a few glorious boundaries and helped India cross the 50-run mark in the 10th over along with Kohli. Proteas bowlers tried to create the pressure but the duo of Dhawan and Kohli managed to rotate strikes and hit regular boundaries, keeping hosts at bay.The left-handed opener picked up a single off Keshav Maharaj to get to his 35th ODI fifty in 58 balls in the 18th over. On the other hand, Virat Kohli took the attack to Sisanda Magala and hit him for two successive boundaries as India crossed the 100-run mark in the 19th over. However, Dhawan couldn’t carry his innings longer and got out to Phehlukwayo for 61 and his 98-run stand with Kohli came to an end in the 23rd over.Rishabh Pant, who came to bat next, threw his wicket by playing a risky shot, getting out for a golden duck.

Despite losing two quick wickets, Kohli continued his controlled innings and completed his 64th ODI fifty. With wickets falling all around him, India needed a match-winning innings from the former India skipper but once again failed to convert, falling for the second time this series to Keshav Maharaj.From there on, India needed a big partnership from Suryakumar Yadav and Shreyas Iyer. The pressure eased when Suryakumar Yadav walked in and unfurled a flurry of attacking shots. Iyer, though, holed out off Sisanda Magal to dent India’s chase again. Soon, Suryakumar Yadav followed, trying to flick Dwaine Pretorius to the leg side and the leading edge taking the ball to mid-off.Deepak Chahar revived India’s hopes with a brilliant cameo, slamming two sixes and five fours in his half-century that took India to the cusp of a win. The half-century stand with Bumrah ended when he was out caught off a slower ball from Ngidi. Things unfolded quickly afterward with South Africa wrapping up the Indian tail to complete a close win.Earlier in the day, After winning the toss and opting to bowl first, India got the first breakthrough whe Deepak Chahar dismissed Janneman Malan on 1. Chahar bowled a lovely outswinger that Malan wanted to defend but got an outside edge and wicketkeeper Rishab Pant took the catch in the 3rd over of the innings.Skipper Temba Bavum then joined Quinton de Kock at the crease.

The duo moved Proteas innings at a brisk rate before KL Rahul ran Bavuma out on eight with a direct hit from mid-off, leaving hosts at 34-2 after 6.3 overs.Despite losing two wickets, Proteas’ scoring rate didn’t drop as Aiden Markram and de Kock stitched a handy partnership. Quinton, especially, looked in superb touch and hit a few attractive shots, and took South Africa to 53/2 after 10 overs.It was Chahar again who gave India their next wicket by getting rid of Markram (15), who played a pull shot and substitute fielder Ruturaj Gaikwad ran from his left to hold a good catch at deep midwicket.Though wickets were falling from the other end, de Kock kept playing his natural aggressive game along with the in-form Rassie van der Dussen at the crease. During the process, Van der Dussen was also dropped by Pant. Jayant Yadav, who is playing his first match of the series, pitched the ball outside off and Dussen edged it and Pant failed to grab it behind the wickets.Soon, de Kock brought up his second consecutive half-century and his 28th overall in ODIs off just 59 balls, taking the hosts past 100 inside 20 overs. Inform Dussen, who got lifeline and looked a bit tentative at the beginning of his innings, also complimented his partner well by rotating strikes well.

De Kock hit boundaries and sixes at regular intervals off Indian bowlers especially spinners and kept the scoreboard ticking. In the 30th over, the duo brought up their 100-run stand, which came in just 108 deliveries. In the next over, de Kock, who marshaled the innings beautifully, notched up a stellar century which was his 17th ODI ton.On the other hand, Dussen got the second reprieve of his innings. It was again Jayant Yadav, who forced Dussen into an edge and Pant dropped the catch. He took full advantage of the chance and brought up his fifty in 53 deliveries.At 212/3 after 35 overs, South Africa were looking set for a big finish but India made a remarkable comeback by taking three wickets in quick succession.Jasprit Bumrah gave India the big wicket of de Kock, who got out after scoring 124 and stitching a 144-run fourth-wicket stand with van der Dussen. The left-hander tried to clear the fence but he mistimed his shot as Dhawan moved to his right from deep square leg and took a calm catch in front of the boundary rope.
Soon after de Kock’s dismissal, Van der Dussen (52) was caught brilliantly in the deep by Iyer off Chahal. Andile Phehlukwayo (4) was the next man to get dismissed via a run-out as Pant whipped off the bails on Shreyas Iyer’s flat throw, leaving South Africa at 228-6 after 40.1 overs.With nine overs to go, it was the lower order’s responsibility to give the innings a strong finish. Miller and Dwaine Pretorius (20) tried their best by stitching a 44-run stand for the seventh wicket before the latter got out in the 48th over. In the last two overs, Indian bowlers bowled with much better discipline and didn’t allow Proteas batters to score freely. They dismissed David Miller (39), Keshav Maharaj (6), and Sisanda Magala (0) to bowl out South Africa for 287-10 in 49.5 overs.Prasidh Krishna (3/59), Jasprit Bumrah (2/52), Deepak Chahar (2/53) and Yuzvendra Chahal (1/47) were the wicket-takers for India.