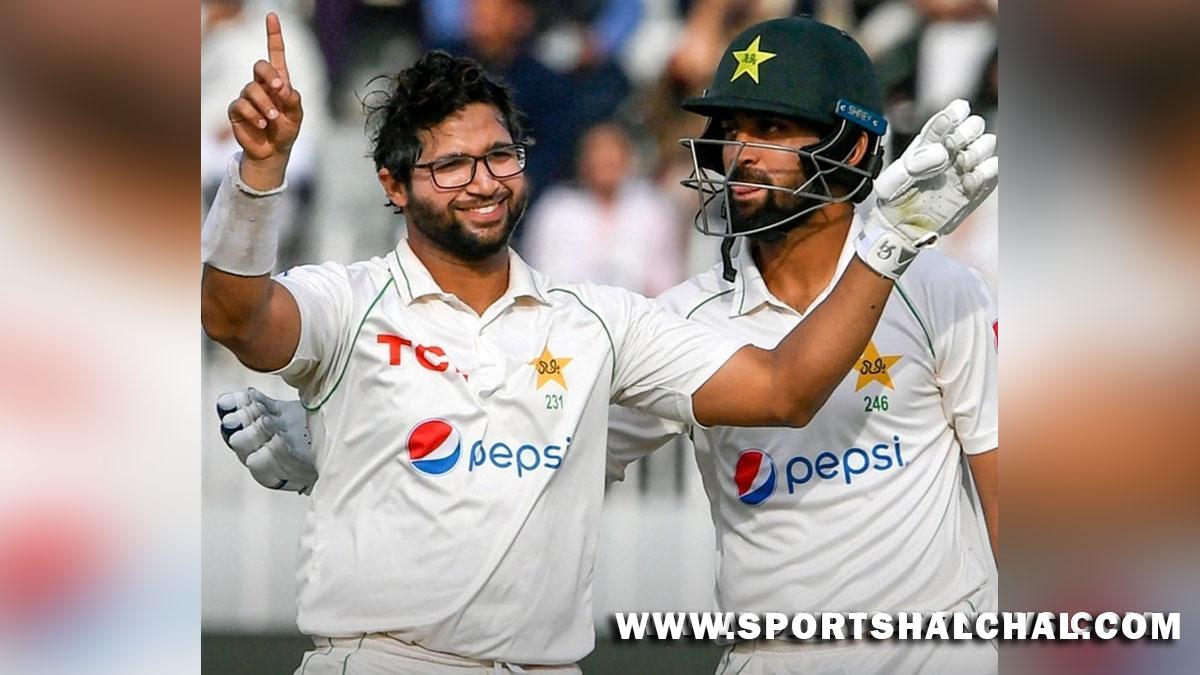 Abdullah Shafique, Imam-ul-Haq hit tons on final day as first Test between Pakistan and Australia ends in a draw

Rawalpindi : Openers Abdullah Shafique (136 not out) and Imam-ul-Haq (111 not out) dominated visitors bowlers and smashed unbeaten centuries on Day 5 as the first Test of the three match series between Pakistan and Australia ended in a draw, here on Tuesday.The draw that had loomed large for much of the first Test was confirmed with an hour remaining on the final day. The two teams finally shook hands with Pakistan’s score reading 252/0 in their second innings.Resuming at 449 for 7, Pat Cummins and Mitchell Starc aimed to take a first-innings lead. To put pressure on the batters, Pakistan started with Shaheen Afridi. However, Nauman Ali, who had already taken four wickets, dismissed Pat Cummins in his first over of the day, completing his third five-wicket haul. Shaheen in the very next over then trapped Starc in front, ending his innings on 13.After Nathan Lyon was trapped in front of the stumps while sweeping Ali, Pakistan wrapped up Australia’s innings on 459/10 in the first 20 minutes of the day with Nauman bagging his career-best figures of 6-107.

With a lead of 17 runs in the first innings, Pakistan openers Imam-ul-Haq and Abdullah Shafique once again blunted Australia’s attack in the second innings. On a dead Rawalpindi surface, the batters got off to a good start, as the Australian bowlers continued to struggle to take early wickets.Imam followed up his maiden Test century with yet another hundred in the second innings. Unlike in his earlier innings, he was in an aggressive mood, charging spinner Nathan Lyon and hitting him down the ground on several occasions. Abdullah, who threw away his wicket on 44 in the first innings, looked solid as Pakistan reached lunch at 76 for 0 with Imam 40 not out and Abdullah unbeaten on 33, an ICC report said.As the second session of the day began, Imam slowly approached his half-century and brought up the landmark with a reverse sweep against Lyon. Abdullah also reached the half-century mark, and the batters continued to stretch their century-opening partnership.With no expectations from the game, Australia decided to rest their regular bowlers and deployed part-time spinners.

The batters continued to pile up runs, taking advantage of the part-timers’ weak deliveries to score runs. With no signs of a declaration, Pakistan reached Tea at 191 for 0 with Abdullah just one run short of his maiden century and Imam unbeaten on 89.With the result of the match almost certain, the final session of the day began. Abdullah, who was in the driving seat throughout the second session of the day, brought up his maiden Test century with a single. In hopes of extracting some positives out of the final day and in search of the first wicket, Australia brought their all-rounder Cameron Green into the attack.Imam on the other end struggled to reach his century, as he survived some close calls and was also lucky to be given not out off a nick on 94. But he ultimately completed his second century with a double over mid-off, becoming the tenth batter for Pakistan to score two centuries in a Test.Both teams finally agreed to mercifully put this match out of its misery and shook hands with Pakistan’s score reading 252 for 0. The action will now move to Karachi with the second Test beginning on March 12.
Brief scores: Pakistan 476/4 decl (Azhar Ali 185, Imam-ul-Haq 157; Pat Cummins 1-62) and 252/0 (Abdullah Shafique 136 not out, Imam-ul-Haq 111 not out) drew with Australia 459 (Usman Khawaja 97, Marnus Labuschagne 90; Nauman Ali 6-107).