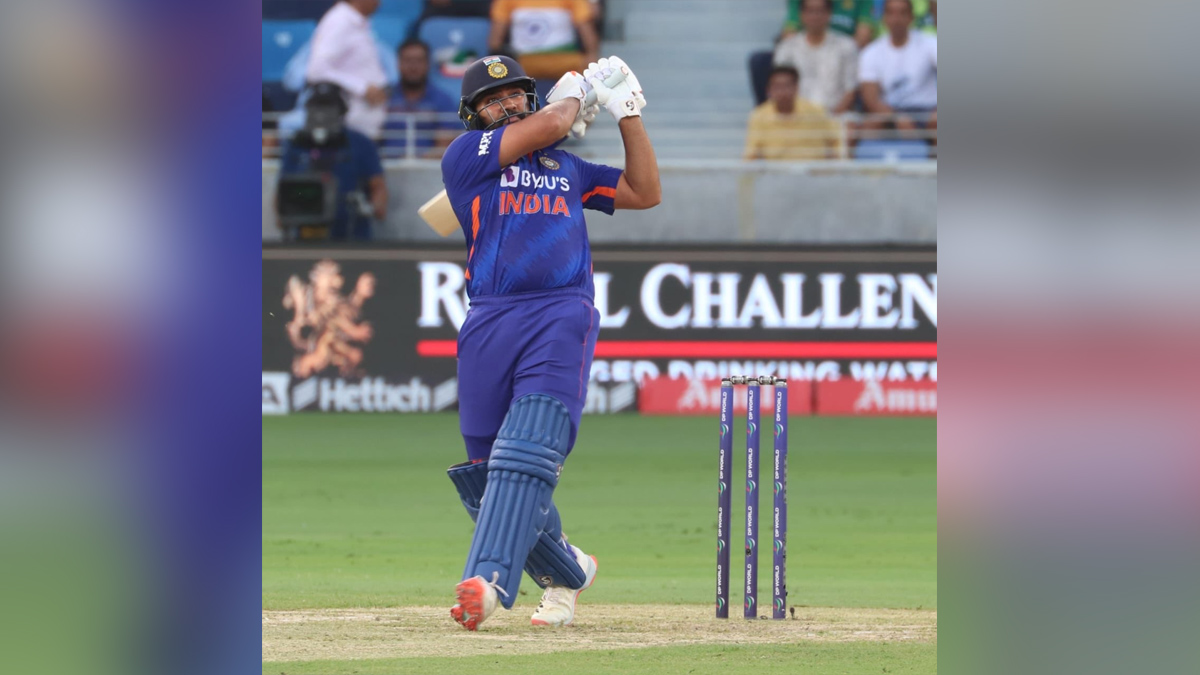 Asia Cup 2022 : Wickets of Hardik Pandya, Rishabh Pant was not needed at that time : Rohit Sharma

Dubai : India skipper Rohit Sharma admitted that losing wickets of Rishabh Pant and Hardik Pandya in quick succession was something that was not needed for the side at that juncture of the match.

Pushed into batting first, Rohit and K.L Rahul came out all guns blazing in a 54-run opening stand as India reverted back to their aggressive attacking approach.

Virat Kohli top-scored for India with 60 off 44 balls, hitting four fours and a six while running hard between the wickets and was superb against pacers.But Pant and Pandya fell in a span of six balls in a bid to go big.

While Pant reverse-swept straight to backward point off Shadab Khan, Pandya, hero of India’s five-wicket win over Pakistan in Group A match, punched a cross-seam ball from Mohammad Hasnain straight to a forward diving short mid-wicket to depart for a two-ball duck.

“The form is brilliant (talking about Kohli), there’s no doubt about that. Needed someone to bat long when the others were getting out. He batted with that tempo as well. Virat getting that score was crucial from the team’s point of view.”

“Wickets of Hardik and Rishabh was not needed at that time. But we want to play with an open mindset. While taking that approach you’ll not always have success,” said Sharma in the post-match presentation ceremony.

Sharma went on to say that despite the five-wicket loss in the Super Four match, India will take a lot of learnings with them in terms of defending totals. “We understand the pitch gets slightly better in the second innings.

It’s a good learning for us. I thought it was a good score.””Any pitch, any conditions when you get 180 it’s a good score. We got to learn a lot today what sort of mindset we need to have when defending a score like that.

Like I said you’ve got to give credit to Pakistan. They’ve played better than us.”Chasing a competitive 181/7, Mohammad Rizwan anchored the chase with a 51-ball 71. But the game turner was Nawaz’s promotion to four, striking 42 off 20 balls, including six fours and two sixes, adding a much-needed impetus to Pakistan’s chase with the duo sharing a 73-run stand.

“It’s a high-pressure game, we know that. You’ve got to be at it every time. A game like that can take a lot. We were calm even when there was a partnership between Rizwan and Nawaz. But that partnership obviously went a little long and they batted brilliantly,” observed Rohit.

For the second time in Asia Cup 2022, an India-Pakistan match went down the wire and the result came in the final over yet again.”Games like this can bring the best out of them if they deliver. These are the games that can make them.

They’ve done it in the past. There’s a class on the other team as well. And we’re not surprised with that,” concluded Rohit.

Asia Cup 2022 : Virat Kohli equals record for most fifties in T20Is against Pakistan

Australia’s ODI series vs Kiwis to kick-start minor tweaks in side for 2023 World Cup : Andrew McDonald