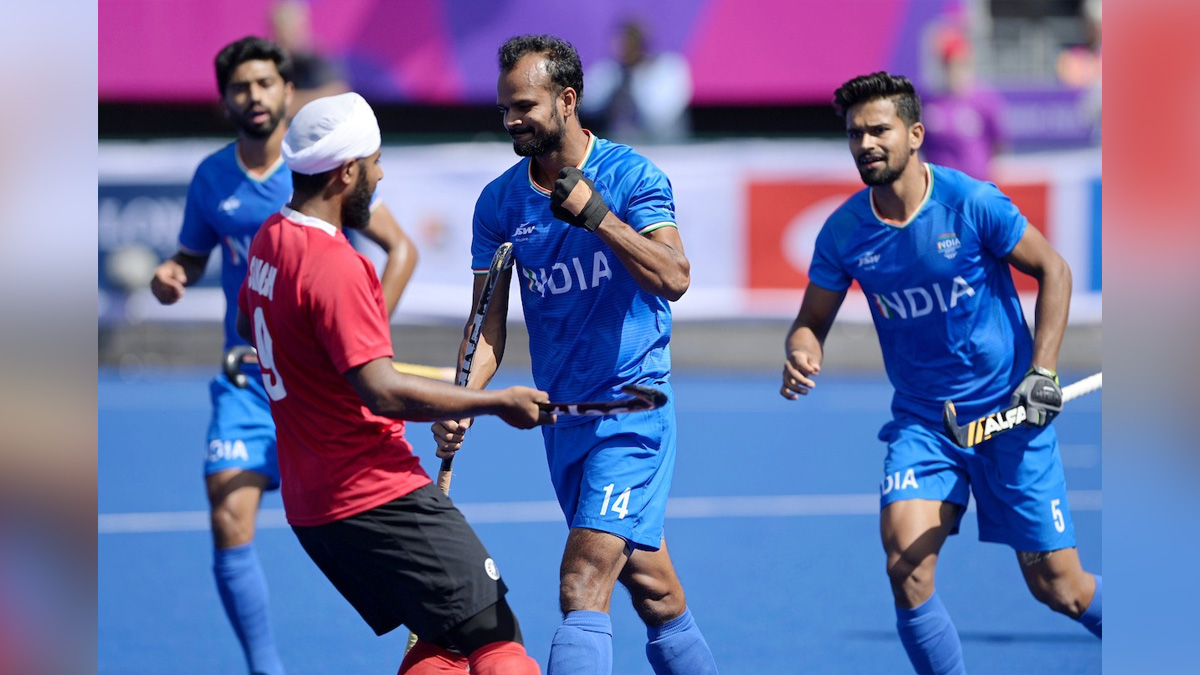 Birmingham : The Indian men’s hockey team continued the unbeaten run at the 2022 Commonwealth Games after thrashing Canada 8-0 in its third Pool B match, here on Wednesday.

With the win, India climbed to the top of the Pool B table with seven points in three games courtesy of their superior goal difference over England. Both England and India have two wins and a draw under their belt but India hold the edge with a goal difference of +19 compared to England’s +8.

Meanwhile, Canada are yet to win a match at Birmingham 2022.”It was good but we could have scored more goals. It would have helped us with the upcoming matches as we drew with England so it will help us win the pool,” said Amit Rohidas after the win.

The match started with India attacking down the left flank straightaway with Hardik Singh and Akashdeep Singh threatening Canada’s defence. Captain Manpreet Singh slipped an excellent pass to Lalit Kumar Upadhyay inside the striking circle, but the shot from the latter just went wide.

Harmanpreet Singh put India in front as he scored the first goal from a Penalty Corner. Minutes later, Amit Rohidas broke past the Canadian defence from the left flank as he struck a powerful hit into the nets to extend India’s lead to 2-0 before the end of the first quarter.

India continued threatening penetrations inside the circle in the early minutes of the second quarter as Canada went deep into their own half to defend their goal. After India received another Penalty Corner, Lalit Kumar Upadhyay scored from a rebound to further extend India’s lead to 3-0.

Minutes later, Abhishek tried a reverse hit on target after receiving a long pass. But Canada goalkeeper Ethan McTavish made a clean save. Hardik Singh passed the ball into the circle from the left flank and Gurjant Singh got his stick just in time to push the ball into the nets as India went into halftime with a 4-0 lead.

India gave no respite to Canadian defence, continuing to attack in numbers, as the second half kicked off. Hardik Singh continued to be the danger man inside the striking circle as he continued to press deep inside the opposition’s defence.

Akashdeep Singh struck a snapshot from the edge of the circle into the nets as India extended their lead to 5-0. With Captain Manpreet Singh running back and forth the length of the field, Canada were left stranded in midfield, and were unable to stitch too many dangerous attacks of their own inside India’s circle.

With 15 minutes left on the clock, India showcased urgency to get more goals on the board, despite already leading by five goals. Mandeep Singh passed the ball to Jarmanpreet Singh, but Canada were able to clear the danger.

A couple of stunning saves were made by Canadian defence after Mandeep Singh and Vivek Sagar Prasad struck powerful shots on target. A late penalty corner opportunity created by Nilakanta Sharma allowed Harmanpreet Singh to get another goal on the board.

With only minutes left on the clock, Mandeep Singh struck a tomahawk into the nets to get his name on the scoresheet, while Akashdeep Singh added another goal in the final seconds, as India went on to win the match 8-0.

India will play their last pool match against world No 13 Wales on Thursday. The table toppers in Pool B will take on the second-placed team from Pool A in the semi-finals and also avoid reigning champions Australia.

“It’s a very important win, we played very well as a team with great effort. We now have a big game we have to win against Wales,” said forward Akashdeep Singh.