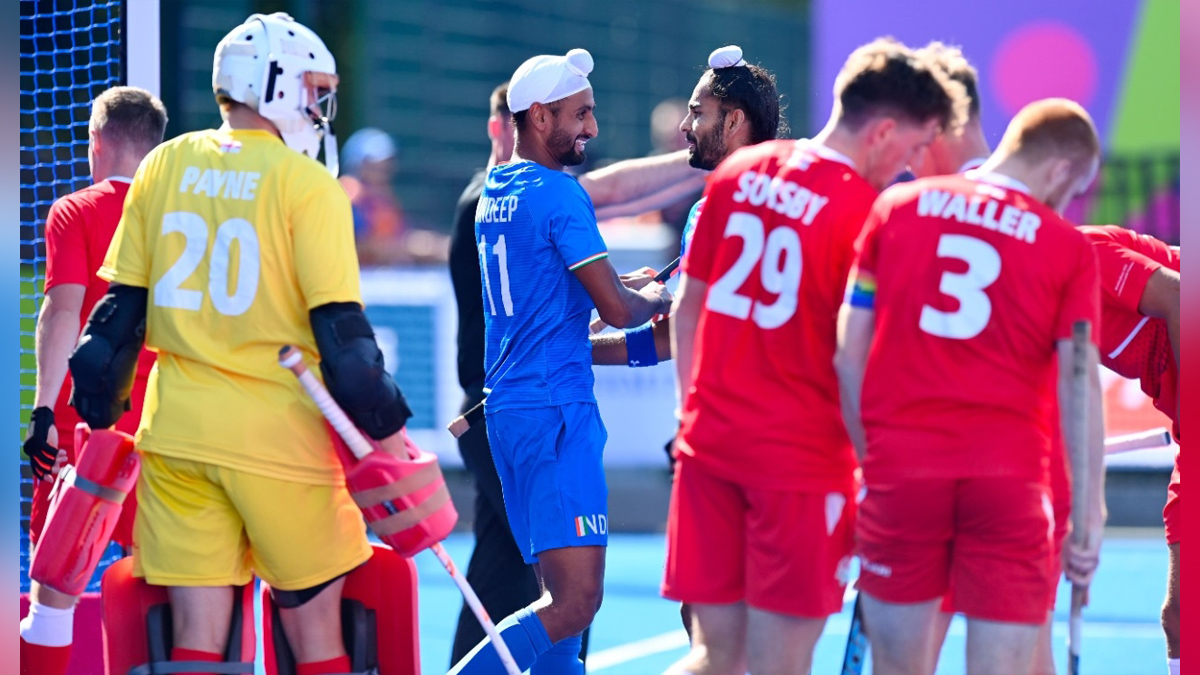 Birmingham : The Indian men’s hockey team twice squandered a 3-goal advantage to be held 4-4 by hosts England in a Pool B match at the Commonwealth Games here on Monday.India took a solid 4-1 lead in the match with Mandeep Singh (13′, 22′) scoring a brace and Lalit Kumar Upadhyay (3′) and Harmanpreet Singh (46′) contributing a goal each.

But with Nicholas Bandurak (47′, 53′) scoring a brace, and Liam Ansell (42′) and Phillip Roper (50′) scored a goal each, England managed to hold on and earned a point from the match played at the University of Birmingham Hockey and Squash centre here and maintained their top position in Pool B table.

The Indians continued to struggle with their penalty corner routine as they could score only two of the 15 they earned. In contrast, England earned three penalty corners and failed on all three. The Indian attackers like Mandeep, Jugraj Singh, Harmanpreet Singh, and Abhishek missed chances to score goals.

India got off to a brisk start with Hardik Singh charging from the left flank soon after the starting whistle in the first minute to put England on the back foot. Minutes later, Lalit Kumar Upadhyay earned the first penalty corner for India, and he scored from the rebound to give his team an early lead.

The young Vivek Sagar Prasad brilliantly came to India’s defence after England earned a penalty corner of their own. With minutes left on the clock in the first quarter, Hardik Singh launched a brilliant counter-attack, as he sent the ball to Mandeep Singh inside the striking circle.

Mandeep struck a powerful tomahawk into the net as India extended their lead to 2-0.Vivek Sagar Prasad and Hardik Singh continued to press deep on the left flank at the start of the second quarter. Sam Ward created pressure on the Indian defence from the right flank, as he tried to cross the ball to William Calnan inside the circle.

But Krishan B Pathak stepped forward to close the angle and made a smart save to deny the opposition.Minutes later, Mandeep Singh created another goal for India with an outstanding move inside the circle as India extended their lead to 3-0. England’s Christopher Griffiths took a shot on target, but could only find the sidebar, and India went to the half-time break with a 3-0 lead.

As the second started, England started holding on to ball possession as they searched for an opening inside the Indian circle. But India continued to defend in numbers, not allowing the opposition any opportunity to get a shot on target.

Mandeep Singh continued to be the target man inside the circle as Gurjant Singh tried to find him to create an opportunity, only to be stopped midway by England’s defence. Liam Ansell managed to get the ball into the net before the end of the third quarter to reduce the margin for England.

Gaining confidence from their first goal scored late in the third quarter, England started pressing deep in the final 15 minutes to try and further reduce the deficit. But a costly error in defense from England earned India another penalty corner, and Harmanpreet Singh converted it with ease to increase India’s lead to 4-1.

England’s Nicholas Bandurak scored a minute later to make it 4-2. Phillip Roper broke through the Indian defence and hit the ball past goalkeeper Krishan B Pathak as England added another goal to the board.

Nicholas Bandurak converted yet again from a counter-attack as England drew level, with minutes left on the clock. India faced some nervy moments with England building pressure but managed to hold on till the final whistle as the match ended in a 4-4 draw.

The Indians went into a shell in the third quarter and thought they had done enough to win the match. They allowed England to attack freely and lost the advantage they had built.It was a disappointing result for India as claiming three points against England would have helped them top the pool and avoid running into Australia in the semifinal.