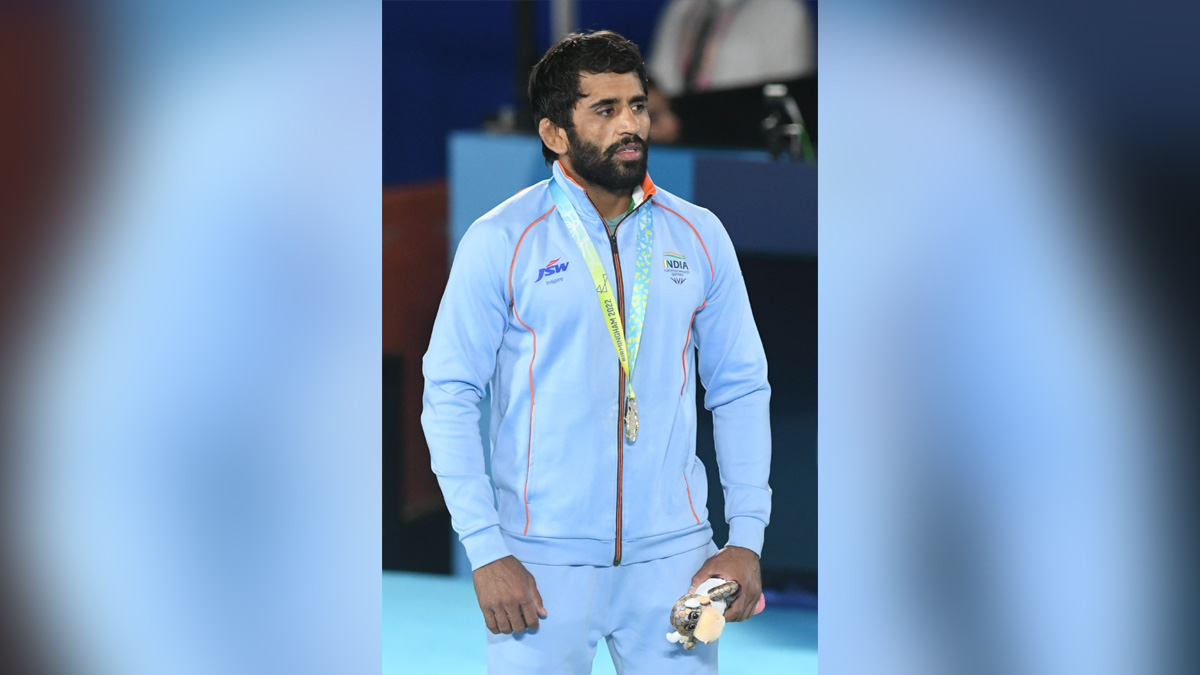 Birmingham : Winning the gold medal at the 2022 Commonwealth Games here was not the real target for celebrated Indian wrestler Bajrang Punia considering his talent and the standard of the sport in CWG, he could do that in his sleep.

Bajrang wanted to win in Birmingham on his terms, with an imposing and aggressive style of play.The 28-year-old Tokyo Olympics bronze medallist from Jhajjar, Haryana won his second Commonwealth Games gold with aggressive performance in the men’s 65kg, beating Lachlan McNeil of Canada in the final.

In an interview with IANS, India’s star wrestler said his aim is to become the first Indian wrestler to win an Olympic gold medal in Paris in 2024.
Excerpts from the interview:
Q: How happy are you with winning your second gold medal in the Commonwealth Games?

A: I am very happy and immensely proud because I had put in some changes after the 2020 Olympics. It feels great to see some of those changes that I have implemented are bearing fruit. It is great to have clinched the gold medal for India.

Q: To win a bout is one thing, to win it in commanding fashion and by imposing your style is altogether another matter. How important was this factor for you in your outings in the Commonwealth Games?

A: Yes, it is very important to win a medal but also to win it the way we want to. Getting the opponent to play as per your style and submit to you is also very important. I consider it a better performance if I manage to do so.

If I am able to dominate his style, then it is even better. I am happy to be able to win in the way I wanted to, so I am happy with my overall performance. I just hope to continue in the same vein.

Q: How satisfied are you that you were able to win the bout in the manner you wanted to dominating and imposing?

A: I am very satisfied that I was able to win the bouts today by playing in the manner I wanted to. I was aggressive but at the same time my defence was also strong. Since the Tokyo Olympics, my performance has been up and down because of the injury I suffered during the Games.

I managed to change things and train well, and I am happy that I have succeeded in implementing that in a tournament.It is the first time since then that I managed to play the way I wanted to. So I am very happy.

Q: You had said a few years back that you wanted to bring back the Bajrang Punia of 2017 the dominance, the imposing style, the aggressive play. How far do you think you have succeeded in that pursuit?

A: I think I am around 70 to 80 per cent there. Now my endeavour is to regain that 10-20 per cent of things remaining. I want to continue working hard on this aspect of the game and hopefully achieve that fully during the upcoming World Championship.

Q: What are your plans for the World Championships and beyond?

A: Besides the World Championships, I want to do well in the Asian Games, the national championships, and after that concentrate on the qualification tournament for the Paris 2024 Olympics. That’s my target for the next year.

Q: Sushil Kumar is the only wrestler who has won two medals in the Olympics…

A: I will try my utmost to add a gold medal to the silver and bronze medals my fellow wrestlers have won for India. I want to use every ounce of my strength to get that gold medal in Paris.I’m working really hard to make sure the dream that was left unfulfilled in the last Olympics (he took bronze), primarily because of my injury, is going to be fulfilled at Paris.

Every athlete wants to get the gold at the Olympic Games and it’s my dream to fulfil that ambition and whatever was incomplete in Tokyo. I’m trying my best in my training regime to reach my goal.
Q: How would you sum up your journey so far?

A: I’ve come a long way since I was young and, it’s not just my journey alone, there is an entire support system backing me including the support staff, the physios who have helped me to stand here and speak to you with a gold medal around my neck.

It’s important that the people working with me behind the scenes, who do not get in front of the cameras, know that I appreciate their efforts because that is what got me here and this is a big stage. I want to take this opportunity to express my gratitude.