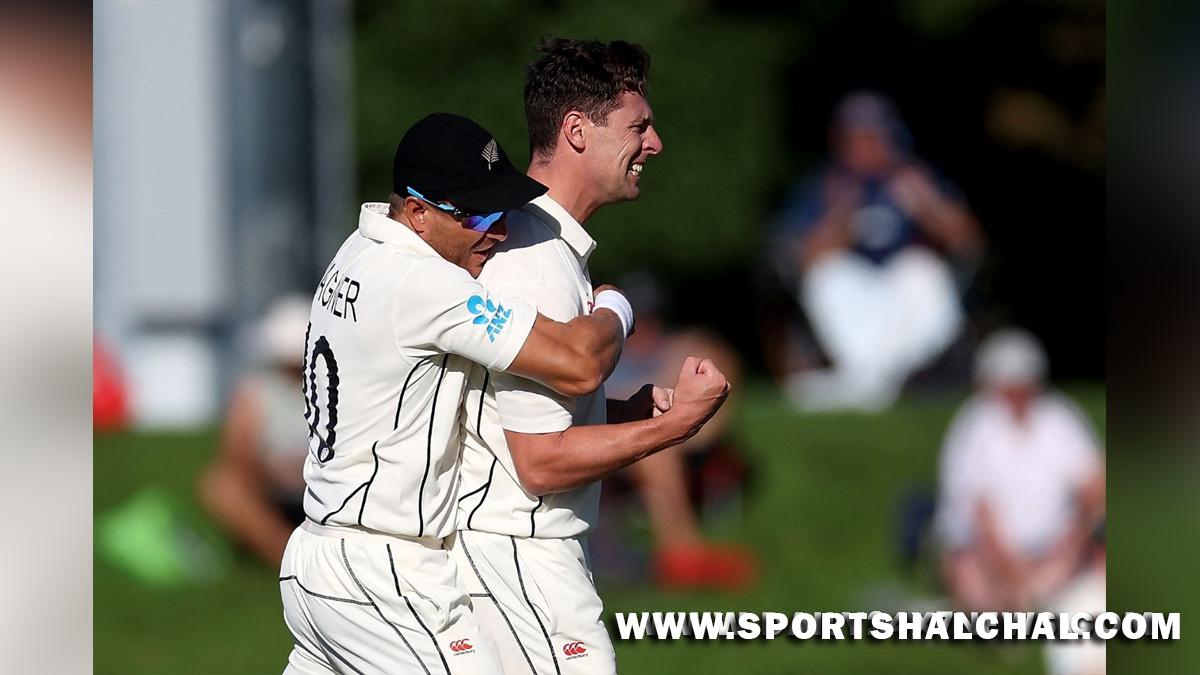 Christchurch : Pace bowler Tim Southee grabbed five second-innings wickets as South Africa suffered their second largest innings defeat against New Zealand in the first of the two-Test series at the Hagley Oval here on Saturday.Thanks to Southee’s incisive bowling (5/35 in 17.4 overs) the Blackcaps thrashed the visitors by an innings and 276 runs with the Proteas capitulating for 111 runs, 35 minutes after the scheduled lunch break.The Dean Elgar-led Proteas faced a total of 91 overs in their two innings with New Zealand pocketing 12 crucial World Test Championship points following the massive victory.South Africa started day three on the back-foot, trailing by 353 runs with seven wickets in hand. It did not take much time for Matt Henry to pick up the first wicket of the day, as he bowled Rassie van der Dussen (9) to continue a dream Test performance on his home ground.The fans in Christchurch were entertained with some top-quality fast bowling through the first session as the tall Kyle Jamieson picked up the wicket of Zubayr Hamza (4) leaving the visitors in all sorts of trouble.

Temba Bavuma (41) was one of the only South African batsmen who put up a fight but Friday’s first session hero with the bat, Neil Wagner, trapped Bavuma for an LBW.Southee brought up his 200th wicket in New Zealand when he dismissed Kyle Verreynne (30) with a back-of-a-length delivery swinging away outside off. He quickly made it 201 by picking up the wicket of Kagiso Rabada (0).Wagner picked up his second wicket of the innings with Marco Jansen (10) edging one to Tom Blundell ensuring the hosts get an additional half hour before lunch break.Southee secured his five-wicket haul with the final wicket of Glenton Stuurman (11) who was initially adjudged non-out but that decision was changed upon New Zealand’s review.It is only the second occasion when New Zealand have beaten the Proteas in a Test. The last one was 18 years ago in Auckland.New Zealand will look to make a clean sweep of the short series when the second Test is played that the same venue but on a different pitch from February 25.
Brief scores: South Africa 95 and 111 in 41.4 overs (Temba Bavuma 41; Tim Southee 5/35, Matt Henry 2/32) lost to New Zealand 482 in 117.5 overs by an innings and 276 runs.