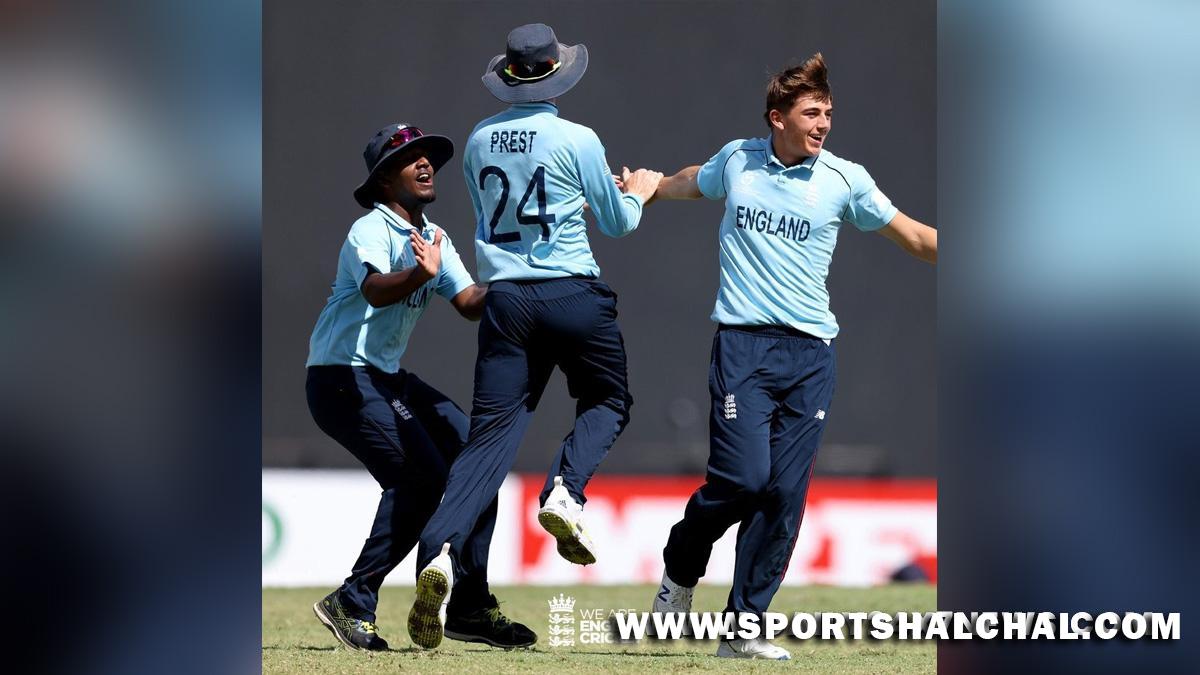 North Sound (Antigua) : A four-wicket haul by spinner Rehan Ahmed and a blazing half-century by Jacob Bethell helped England defeat South Africa, by six wickets and storm into the Super League semi-finals of ICC U19 Cricket World Cup here.Ahmed claimed four for 48 as South Africa were bundled out for 209 in 43.4 overs despite a classy 97 by Dewald Brevis. In reply, England romped to 212/4 in 31.2 thanks to Bathell’s 88 off just 42 deliveries.Bethell, who was born and raised in Barbados and joined the youth ranks at Warwickshire as a 17-year-old at the start of 2021, blasted 16 boundaries and two sixes as England raced to a superb victory.The aggression shown by England opener Bethell removed any pressure they may have felt chasing 210, with the Warwickshire man producing one of the best individual knocks of the tournament so far.Bethell’s explosive innings saw England rattle along at over ten runs an over before he fell with the score at 110, already over halfway to the target and with 39.2 overs remaining.

He and fellow opener George Thomas (19) added 110 runs for the opening wicket before Bathell went for a slog sweep and failed to connect properly, sending down the throat of Ethan-John Cunningham who took a sharp catch at deep midwicket.The only tinge of disappointment for Bethell was that he didn’t convert his start into what would have been a richly-deserved century.England raised the remaining runs without much trouble as they sealed a place in the semi-finals.Earlier, South Africa elected to bat first on winning the toss but soon ran into trouble as they were reduced to 21/2 in the seventh over.But Dewald Brevis came to their rescue and helped them reach a modest target.The all-rounder’s returns with the bat have been quite extraordinary at this tournament and he should have had another century against England, falling for 97 as he looked to boost his side’s total while wickets tumbled around him.Brevis is nicknamed ‘Baby ABD’, and it’s not hard to see why comparisons have been drawn with the South Africa legend AB de Villiers.

His array of shots and attacking potential is something special, but so is the 18-year-old’s control throughout the tournament he has played at a pace that suits the team rather than himself.His four innings to date at the U19 World Cup have yielded 65 against India, 104 against Uganda, 96 against Ireland, and now 97 against England. And with two games still to go, it’ll be fascinating to see how many more runs he can pile on in the Caribbean.But the rest of the South Africa batters failed to give him much support as they were bundled out for 209.Joshua Boyden looked just as dangerous with the new ball against the top-level batters of South Africa as he had during the group stage, taking two early wickets and finishing with very tidy figures of 2/31.Spinner Ahmed was outstanding too, coming back well after being hit for runs early on to take 4/48 off his ten overs.Meanwhile, in the Plate League, Zimbabwe thrashed Scotland by 108 runs while hosts West Indies registered a 169-run victory against Papua New Guinea.