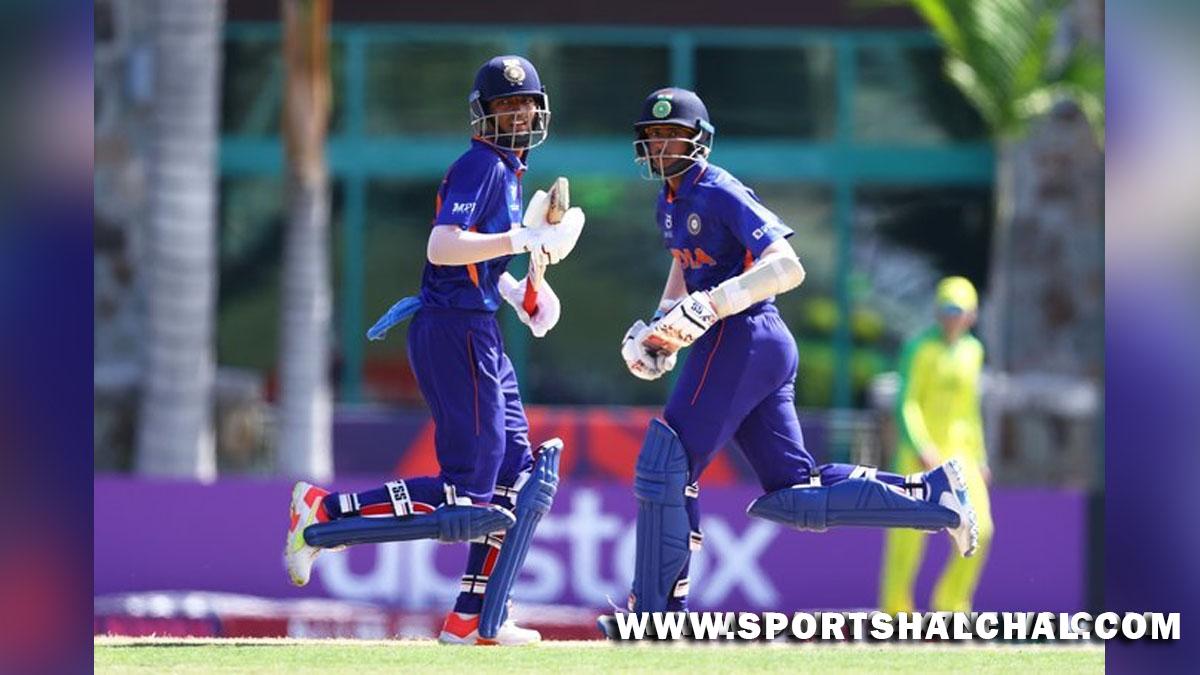 Osbourn (Antigua and Barbuda) : An even-ball century by skipper Yash Dhull (110) and his 204-run partnership for the third wicket with Shaik Rasheed (94) set up India Under-19 for a 96-run victory against Australia in the semi-finals of the ICC U19 Cricket World Cup.India, the most successful nation in U19 Cricket World Cup history with four titles, thus reached the fourth successive final and will take on England in the summit clash. India last won the title in 2018 in the biennial event and had lost to Bangladesh in the final two years back.Electing to bat first, India were in a spot of bother at 37/2 with both openers Angkrish Raghuvanshi (6) and Harnoor Singh (16) back in the pavilion. Skipper Dhull (110 off 110) and Rasheed (94 off 108) stitched together a majestic partnership of 204 runs to help the 2020 finalists reach 290/4 in 50 overs at the Coolidge Cricket Ground.

In reply, Australia U19 succumbed to the pressure created by the India U19 bowlers in the middle overs and lost their way despite a fighting half-century by Lachlan Shaw (51 off 66) to be eventually restricted to 194 all out in 41.5 overs, falling short by 96 runs.Earlier, the Indian innings didn’t get off to the start skipper Dhull would have wanted as Raghuvanshi fell for a 30-ball six in the eighth over, with runs hard to come by in the Powerplay.It was William Salzmann who picked up the early scalp, but Jack Nisbet was the most impressive bowler in the early stages, with his first six overs going for just 12 runs as India were put under huge pressure.Nisbet got the reward for his tight spell with the wicket of the other opener Narnoor for 16, to leave India in a spot of bother on 37/2.But that dismissal brought captain Dhull to the crease, ‘nd India didn’t look back, as the skipper and Rasheed patiently led the recovery and before upping the scoring rate significantly in a remarkable partnership.
The pair were still at the crease going into the final ten overs and with both approaching a century. Captain Dhull did get to that milestone before signaling his intent with a smoked six off the very next delivery.

The 19-year-old fell in an unfortunate manner, run out backing up at the non-striker’s end for a majestic run-a-ball 110.And Rasheed fell to the next ball, caught at backward-point just six runs short of his own century.The double-blow threatened to slow what had looked set to be an explosive finish to the innings, with Rasheed’s dismissal leaving India at 241/4 with four overs remaining.But Rajvardhan Hangargekar (13 off 10) and Nishant Sindhu (12 not out off 10) ensured that the runs kept flowing, before Dinesh Bana (20 not out) finished the innings in style, hitting two sixes and two fours off the four deliveries he faced. Bana’s late cameo helped India reach 290/5, with 27 runs coming off the final over.India’s innings was one of two distinct halves, with just 86 runs coming off a testing first 25 overs, and then 204 runs ransacked off the second 25, according to a report on ICC’s official website.Australia’s hopes of reaching the target of 291 to set up a final against England suffered a big early blow when in-form opener Teague Wyllie was trapped in front in just the second over of the reply.

Wyllie had scored significantly at the top of the order in all three of Australia’s previous wins at the tournament, but his dismissal didn’t immediately seem to knock the team’s confidence, with Campbell Kellaway (30) and Corey Miller (38) scoring at a reasonable pace through the following 15 overs in a partnership worth 68.However, India’s main threat was always expected to be their quality spin attack, and so it proved, with part-timer Raghuvanshi fooling Miller with a clever change of pace, and Vicky Ostwal picking up the scalp of Kellaway six balls later.Wickets fell at regular intervals from there on, as India’s spinners took the game away from Australia, with only Lachlan Shaw surviving for any significant length of time for a hard-fought 51.But with Shaw at risk of running out of partners, he went on the attack after reaching his half-century, bottom-edging a big heave onto his stumps to become the ninth wicket to fall.And India sealed their spot in Saturday’s final with a runout, as a mix-up between Tom Whitney (19 off 17) and number eleven Jack Nisbet left the former stranded.
Brief scores : India U19 290/5 in 50 overs (Yash Dhull 110, Shaik Rasheed 94; Jack Nisbet 2/41, William Salzmann 2/57) beat Australia U19 194 in 41.5 overs (Lachlan Shaw 51, Corey Miller 38; Vicky Ostwal 3/42, Nishant Sindhu 2/25, Ravi Kumar 2/37).