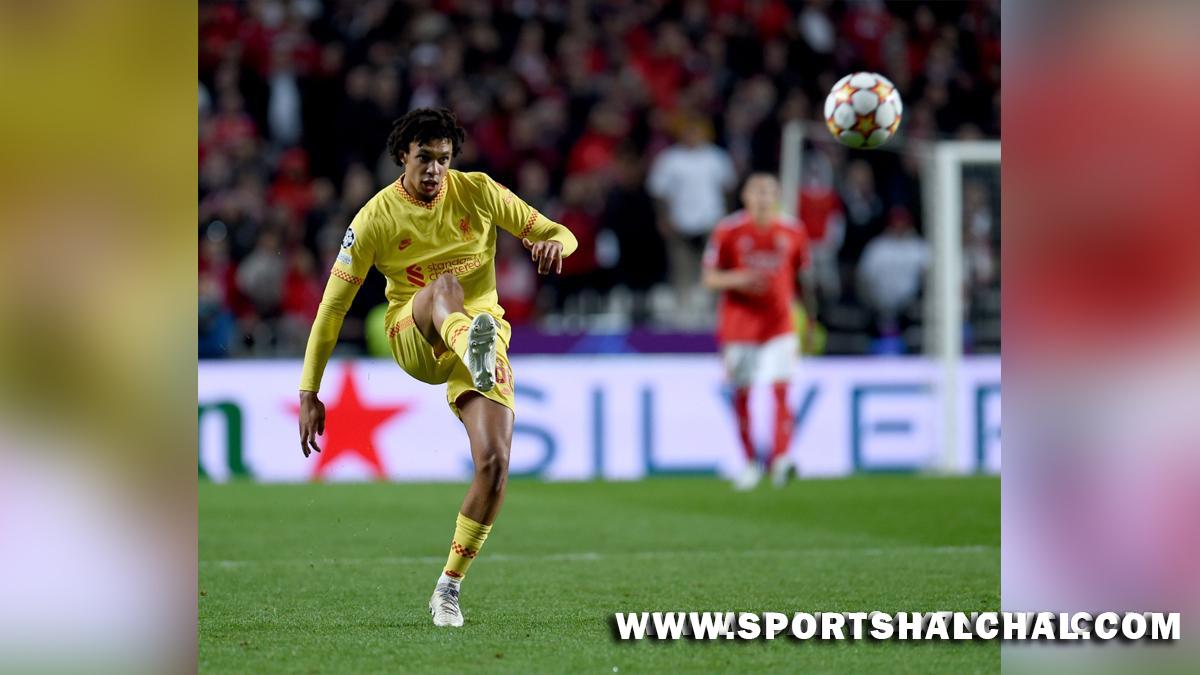 Lisbon : Premier League giants Liverpool have one foot in the UEFA Champions League semifinal after they defeated Portuguese club Benfica 3-1 in the quarterfinal first leg at Estadio da Luz here on Wednesday (IST). Ibrahima Konate’s maiden goal for the club a 17th-minute header was followed by a Sadio Mane strike to round off a superb passage of play during the opening half for the Reds. The Portuguese outfit was quick to clip the visitors’ charge after the break, as Darwin Nunez curled the ball in on the 49th minute. But Jurgen Klopp’s Liverpool held off increasing pressure from Benfica and netted again late through Luis Diaz to ensure they will hold a huge advantage come the return leg at Anfield on April 13. The German tactician made half-a-dozen changes from the weekend victory over Watford, with Trent Alexander-Arnold returning at right-back and Diaz named in attack on his return to Portugal. Liverpool threatened to get in front inside nine minutes, when Mane’s backheel pass into the box found Mohamed Salah.

The Egyptian forward’s strike was, however, blocked by Nicolas Otamendi, according to liverpoolfc.com. Naby Keita was then denied by the gloves of Benfica goalkeeper Odisseas Vlachodimos with a drive from 20 yards, but the Reds broke through in the 17th minute. Andy Robertson swung the ball deep to the far post from a left-side corner and Konate escaped his marker to meet the delivery with a firm header into the bottom right corner. A stunning pass from Alexander-Arnold reached Diaz inside the box and he nodded across the goal for the waiting Mane to nudge into the net and complete an outstanding team move in the 34th minute. In the second half, Rafa Silva got away along the right flank and when he sent a cross into the penalty area, Ibrahima Konate was unable to clear and Benfica’s Nunez pounced with an assured curler beyond the reach of Alisson. Momentum swung significantly in the home team’s favour immediately and they pressed strongly for an equaliser with quick, direct attacks. Liverpool responded by deploying a triple substitution Roberto Firmino, Jordan Henderson and Diogo Jota came in place of Mane, Salah and Thiago Alcantara.

Klopp’s men managed to quell the pressure in the closing stages and then extended their lead for the second leg back on Merseyside next week. Keita carried the ball through the middle and weaved a pass to Diaz, who rounded the goalkeeper and pushed a finish into the open net to make it 3-1. Man City overcome Atletico Madrid Manchester City will take a narrow 1-0 lead to Madrid next week after a hard-fought first-leg quarterfinal at the Etihad on Tuesday night. The Spanish club defended resolutely and City kept attacking almost from start to finish, and finally managed to score in the 70th minute through Kevin De Bruyne. It was a moment of magic from Phil Foden, which unlocked the Atletico defence for De Bruyne to slot home the only goal of the match. With Atletico totally in defence and City attacking at every possible opportunity, it made for frustrating viewing. In fact, City were virtually camped in the rivals’ final-third throughout but failed to trouble goalkeeper Jan Obiak, thanks in part to some off-target long rangers. However, there was more urgency about City after the restart with Ilkay Gundogan curling a low shot just wide and De Bruyne seeing a free-kick saved by Obiak in the first 10 minutes.

With 67 minutes of play gone, City manager Pep Guardiola brought Jack Grealish, Foden and Gabriel Jesus to try and find a breakthrough. And, within three minutes, the English club went ahead. Foden picked up the ball 10 yards outside the Atletico box, threaded a ball into the path of De Bruyne who hit a low shot across Obiak and into the bottom left-hand corner sending the Etihad into a tizzy. “It was a difficult game against tough opponents they played two banks of five for the first 25-30 minutes and it was so difficult to find spaces but we were patient enough except for the first 10 minutes. The first 5-10 minutes of the second half we attacked not at the right rhythm and we didn’t play the way we play,” Guardiola told mancity.com. “But yeah, it was a good result today. We had one or two more chances to score a second with Kevin, but good result and we won the game.”