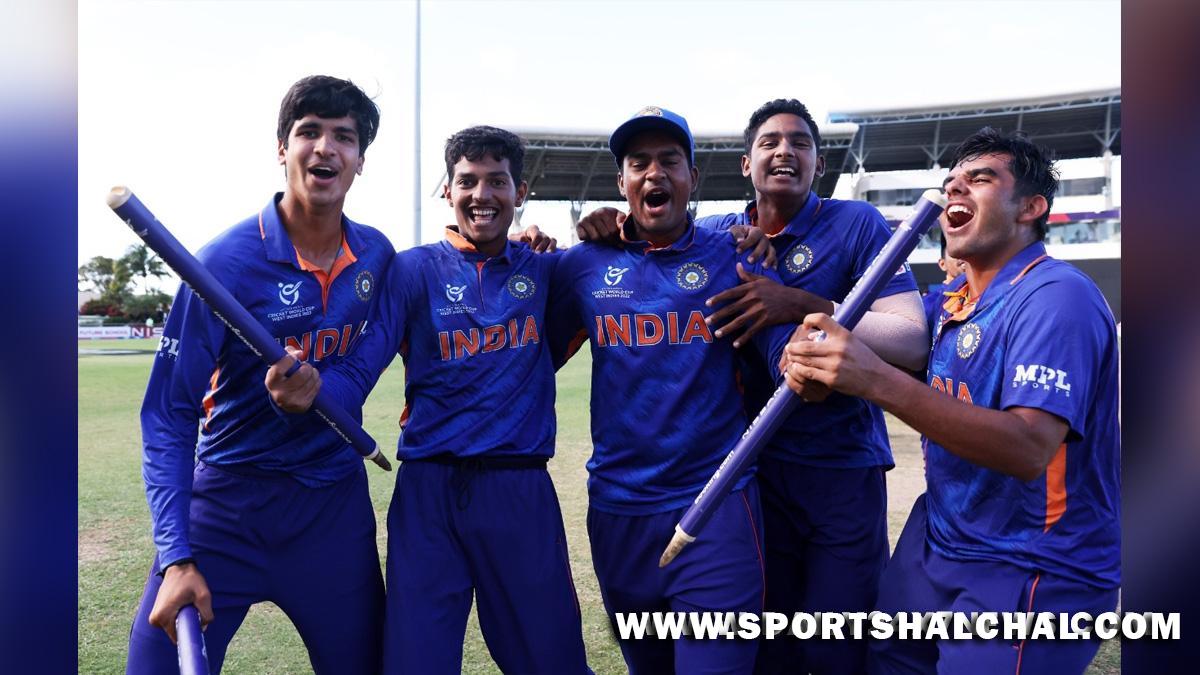 Antigua : India Under-19 cricket team captain Yash Dhull was on Sunday named skipper of ICC’s Most Valuable Team of the Tournament after his side defeated England in the final to clinch the U-19 ICC Cricket World Cup here on Saturday.India defeated the Young Lions by four wickets at the Sir Vivian Richards Stadium to lift the Cup for the fifth time in 22 years.Besides Dhull, two more Indians all-rounder Raj Bawa and spinner Vicky Ostwal figure in the 12-strong team. Overall, eight nations are represented in the line-up. The line-up has a pace battery that includes Josh Boyden of England, Awais Ali of Pakistan and Ripon Mondol of Bangladesh.England all-rounder Tom Prest and Sri Lanka’s Dunith Wellalage are the spin options in the 12 alongside India’s Ostwal. South Africa’s Dewald Brevis was announced as the ‘Player of the Tournament’ for his record-breaking run haul.

Dhull, a right-hand batter took up his place at No. 4 having hit 229 runs in the tournament, including a century, and his tactical use of bowlers was crucial in leading the side to victory.Rival captain in the final, England’s Tom Prest, sits one place below Dhull in the batting order of the ICC’s Most Valuable Team of the Tournament having hit 292 runs in six games, the third most of the competition.Dewald Brevis, a right-handed batter, was adjudged the ‘Player of the Tournament’ after smashing 506 runs across six matches to become only the second player to hit over 500 runs at an U-19 Men’s Cricket World Cup. In doing so, the 18-year-old passed India’s Shikhar Dhawan’s total for the most runs in a single tournament, hitting one more run than Dhawan managed in 2004.Brevis also took seven wickets in the competition returning best figures of 2/18 against Uganda during the group stages.Haseebullah Khan of Pakistan was named one of the openers after scoring 380 runs across the tournament.

He was also selected as the wicketkeeper, having taken eight catches and effected two stumpings, the fourth best return of the competition.His opening partner is Australia’s Teague Wyllie who tied with Angkrish Raghuvanshi for 278 runs, the joint fourth-most of the tournament.Raj Bawa is another all-rounder who impressed throughout the World Cup, hitting a tournament-high 162 not out against Uganda, on his way to 252 runs for the competition. Bawa was ‘Player of the Match’ in the final against England, taking 5/31 to put India in a strong position and take his wicket tally to nine.Just below him in the line-up is teammate Ostwal who took 12 wickets across his six matches with his left-arm orthodox including 5/28 against South Africa.The team (in batting order): Haseebullah Khan (wk, Pakistan), Teague Wyllie (Australia), Dewald Brevis (South Africa), Yash Dhull (captain, India), Tom Prest (England), Dunith Wellalage (Sri Lanka), Raj Bawa (India), Vicky Ostwal (India), Ripon Mondol (Bangladesh), Awais Ali (Pakistan), Josh Boyden (England), Noor Ahmad (Afghanistan).

Justin Langer apologises for being ‘too intense’ in resignation letter