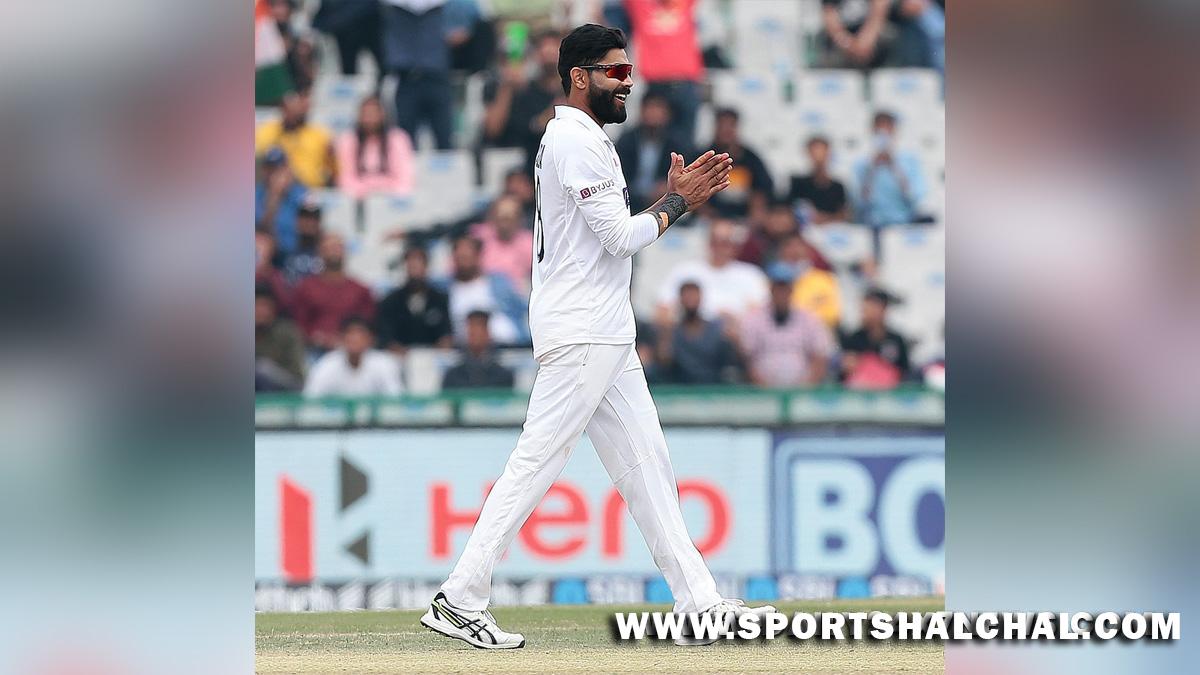 Mohali : Ravindra Jadeja starred with bat and ball as India took a 1-0 lead in the two-match Test series after defeating Sri Lanka by an innings and 222 runs at the IS Bindra PCA Stadium. After being bundled out for 174 in the first innings, Sri Lanka were made to follow-on and were all out for 178 in 60 overs to complete a meek surrender by the visitors in just three days.Jadeja, after making 175 not out with the bat, took 5/41 in the first innings and 4/46 in the second innings. He and Ravichandran Ashwin, who took 2/49 and 4/47 apart from making 61 with the bat, made merry on a day on which 16 Sri Lanka wickets fell.On the third ball of the session after tea, Ashwin got Charith Asalanka forward and extracted the outside edge which hit Rishabh Pant’s thigh and flew to Virat Kohli for a catch at first slip. Asalanka’s dismissal meant Ashwin went past legendary all-rounder Kapil Dev to have 435 Test wickets and become the second-highest wicket-taker for India after Anil Kumble’s 619 scalps.

The next over saw Jadeja trap Angelo Mathews lbw with a big turning in delivery which opened his front leg and rapped him low on the back pad. Mathews reviewed but couldn’t overturn the decision. Jadeja’s next victim in the same over was Suranga Lakmal, who repeated his first-innings dismissal of giving a catch to mid-off, this time to mid-on.Niroshan Dickwella was in attacking mode, hitting Ashwin, Jayant Yadav and Mohammed Shami for boundaries to be the lone ranger for Sri Lanka with the bat. Jadeja grabbed his ninth wicket as Lasith Embuldeniya tried to defend off backfoot and the thick outer edge was pouched by a very sharp Pant.Dickwella continued to hit gorgeous shots, whipping through mid-wicket, square leg and driving down the ground. The wicketkeeper-batter reached his half-century. But in the next over, Ashwin ended the match with Lahiru Kumara holing out to mid-off.

Earlier, after a career-best 175 with the bat, all-rounder Jadeja bagged a five-wicket haul as India dismissed Sri Lanka for 174 in 65 overs in the first innings. Resuming from 108/4 on day two, the start wasn’t rosy for India as Pathum Nissanka and Charith Asalanka frustrated the hosts’ bowling attack.Moreover, Asalanka and Nissanka were given reprieves in different overs of Ashwin. While Asalanka’s catch was dropped by Rohit Sharma at short cover, Shreyas Iyer at deep mid-wicket couldn’t hold on to the chance given from Nissanka.Nissanka was troubled by Ashwin but outside of it, the batter fought his way to reach his fifth half-century in Test cricket. Asalanka, despite being bamboozled on several occasions, gave Nissanka good support with boundaries through leg-side off Ashwin.The 58-run partnership between Nissanka and Asalanka came to an end when Jasprit Bumrah’s slower ball from round the wicket deceived the latter, trapping him lbw.

Captain Rohit Sharma reviewed the original decision to reverse it in India’s favour as replays showed the ball hitting the top of the middle stump.From there on, Sri Lanka’s batting went downhill as Jadeja took out Dickwella and Lakmal by luring them to play rash shots and hole out to square leg and mid-off respectively.Shami took out Embuldeniya with a snorter of a bouncer which took the edge off the splice of the bat to short leg. Jadeja then got his 10th five-for in Tests by taking out Fernando and Kumara on back-to-back balls, ending Sri Lanka’s shaky stay at 174.After being made to follow-on, Sri Lanka were 10/1 at lunch and added 110 runs in the second session. Though they lost three batters with Mathews still looking solid at the crease after playing 72 balls, the result was a foregone conclusion as Sri Lanka lost the match in a meek fashion.
Brief scores: India 574/8 dec in 129.2 overs (Ravindra Jadeja 175 not out; Lasith Embuldeniya 2/188) beat Sri Lanka 174 all out in 65 overs (Pathum Nissanka 61 not out, Charith Asalanka 29; Ravindra Jadeja 5/41, Jasprit Bumrah 2/36) and 178 all out in 60 overs (f/o) (Niroshan Dickwella 51 not out, Dhananjaya de Silva 30; Ravindra Jadeja 4/46, Ravichandran Ashwin 4/47) by an innings and 222 runs