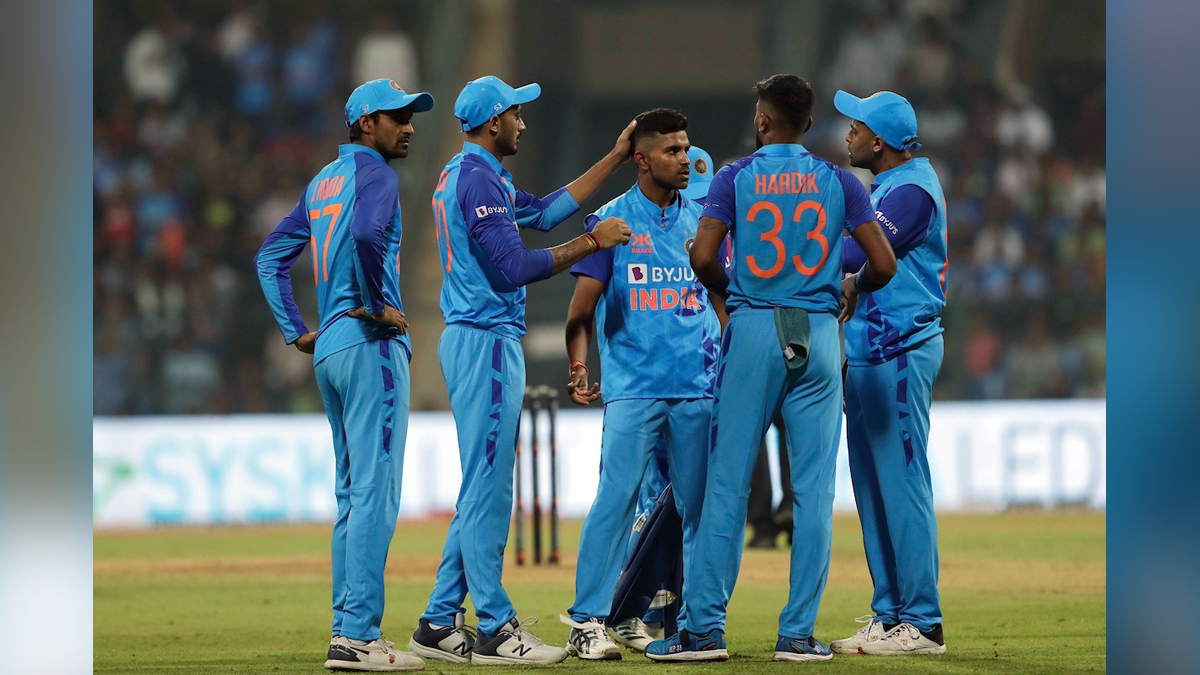 Mumbai : Young medium pacer Shivam Mavi claimed 4-22 on debut after Deepak Hooda and Axar Patel came together for a quickfire half-century in fine rearguard action as India defended stoutly to beat Sri Lanka by two runs in the first T20I and take a 1-0 lead in the three-match series at the Wankhede Stadium, here on Tuesday.

India started 2023 with victory thanks to some good bowling by Mavi, Harshal Patel (2-41) and Umran Malik (2-27) and two plucky run-outs off desperate attempts as they prevailed over Sri Lanka in a last-ball thriller.

With a modest 162 to defend, India needed to get early wickets to put Sri Lanka under pressure and they did just that, eventually getting them all out for 160 in 20 overs.

Mavi claimed two wickets in his first spell in his debut match, bowling some good lengths and maintaining the pressure created by skipper Hardik Pandya, who opened the bowling, conceding just 12 runs in three overs.

Sri Lanka skipper Shanaka and Wanindu Hasaranga added 40 runs for the sixth wicket but just when they were looking like taking the match away, the right-handed pacer Mavi broke their partnership by sending back Hasaranga.

Pandya claimed a fine catch, coming back to the field after going out for treatment struck by a bout of cramps while taking a catch to send back Bhanuka Rajapaksa, as Sri Lanka slumped to 108/6 in the 15th over.

But Shanaka was still the dangerman and he struck some lusty blows to take Sri Lanka to 34 needed off 20 balls, hitting Harshal Patel to a six and four in the 16th over.

He meted out the same treatment to Umran Mailk in the next over but the young pacer had the last laugh when he had the Sri Lanka captain caught in the deep by Chahal in the same over to sink the last nail in the Sri Lankan coffin.

Mavi had made it possible for India as he completed his four-fer when he sent back Maheesh Theekshana for one, caught by Suryakumar Yadav at long-off with a length ball outside off.

However, there was one final twist remaining in the match as Chamika Karunaratne blasted a couple of sixes to take Sri Lanka to the final over needing 13 runs. Axar Patel bowled a wide and was carted for a six by Karunaratne before Kasun Rajitha was run out off the fifth ball, going for a second run.

Sri Lanka needed four runs off the final delivery but Karunaratne could not hit Axar out and Dilshan Madushanka was run out, attempting a second run as India won by two runs.

Mavi had provided India with the breakthrough in his first over by claiming his first T20I wicket on debut. The young bowler showed great character as he struck after being hit for back-to-back boundaries by Kusal Mendis in his first over.

Mavi came back strongly in his second over and sent back Nissanka, sending one through the game to rattle the stumps. Dhananjaya de Silva was his second victim when he got the batter to spoon a catch to Sanju Samson with a slower one.

Earlier, Deepak Hooda and Axar Patel came together to raise a quick-fire half-century partnership in fine rearguard action as India managed to reach 162/5 in 20 overs after being put in to bat by Sri Lanka skipper Dasun Shanaka, who won the toss.

Hooda hammered 41 not out off 23 deliveries, hitting one boundary and four sixes while Patel struck 31 not out off 20 balls (three fours and one six) as India recovered from a precarious 94/5 in the 15th over.

India looked in deep trouble with half the side inside the dugout with 94 runs on the board but Hooda and Patel came together and raised 68 runs for the unfinished 6th wicket partnership to help India to a decent score.

Hooda hammered 41 runs off 23 deliveries, hitting one boundary and four sixes while Patel struck 31 off 20 balls (three fours and one six) as India recovered from a precarious 94/5 in the 15th over.

Their sensible batting took India to a decent total. The match started in whirlwind fashion as Ishan Kishan blasted 17 runs off the first over bowled by Kasun Rajitha, hitting the right-arm medium pacer for six and two fours as the bowler struggled for direction, even bowling a wide delivery.

But India were soon in trouble as debutant Shubman Gill (7), Suryakumar Yadav (7) and Sanju Samson (5) departed in quick succession. Ishan Kishan and Pandya raised 31 runs for the fourth wicket but they two departed trying to force the pace before Hooda and Axar Patel got going in the final stretch of the Indian innings. Mavi then took over and along with the bowlers helped India to a tense victory.