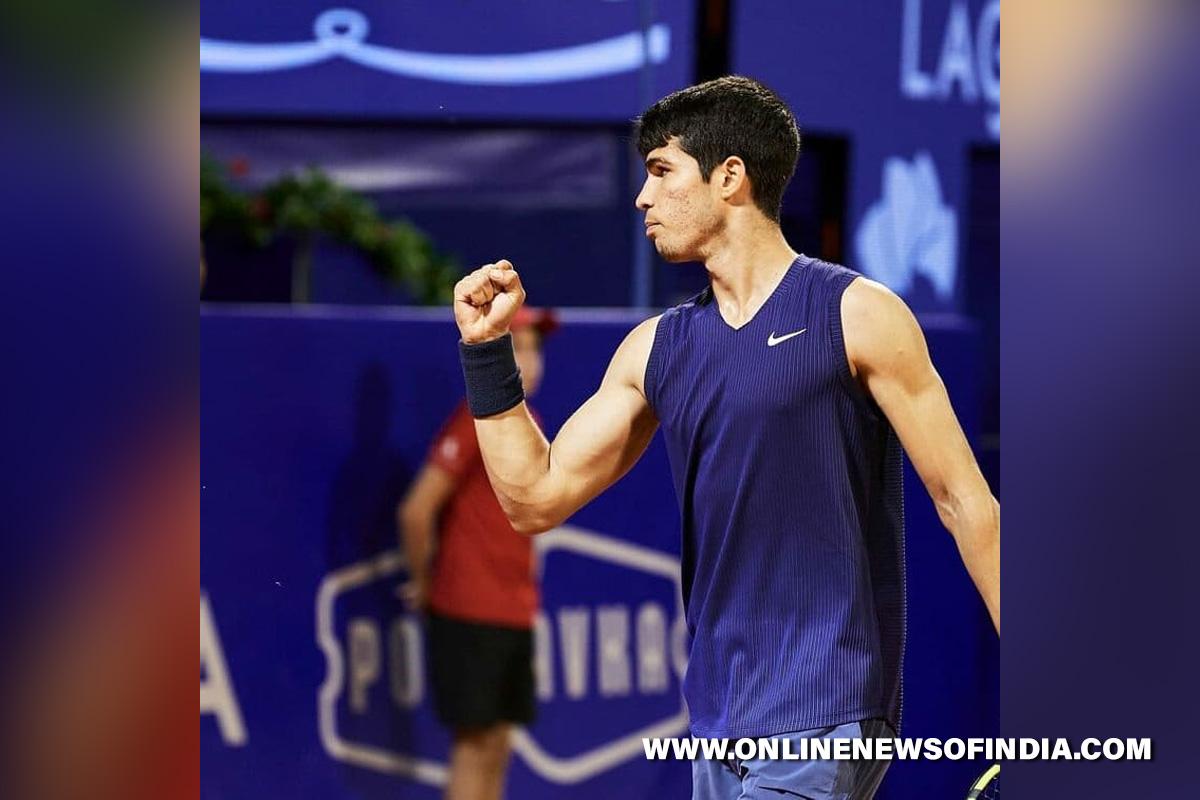 New York : Spain’s Carlos Alcaraz became the youngest US Open quarterfinalist in the Open Era after he ended the run of qualifier Peter Gojowczyk of Germany in five sets at Flushing Meadows here.The 18-year-old Alcaraz, who had stunned Greece’s Stefanos Tsitsipas in a third-round match to become the youngest man to defeat a Top-3 player at the US Open, secured back-to-back five-set victories for the first time in his career to advance 5-7, 6-1, 5-7, 6-2, 6-0 on Sunday evening.”I’m super excited to be in my first second week in the Grand Slam, so it’s amazing for me. It’s a dream come true,” Alcaraz said.”It’s really tough to play these kinds of matches, to play fifth sets… I hope to play more second weeks, to play more quarterfinals of Grand Slams. I didn’t expect to play quarter-finals here. So I think it’s a really good performance from me in these matches,” Alcaraz told atptour.com.”The first set was really, really tough. I think that I was two breaks up in the first set, and end the set losing, but I started the second set with more power than the first set… It’s a really good performance in the second set for me.”Both players had treatment on their left legs deep in the fourth set and after Alcaraz secured a hard-fought hold for 4-1, Gojowczyk looked to be struggling.

The Spaniard was in total control as the deciding set wore on.After three rounds of qualifying and two of his three main draw matches had gone into five sets, Gojowczyk was attempting to finish points quicker to conserve energy but momentum had firmly swung to his younger opponent.”In the first sets I thought that I reached my limit, physically and mentally. I think the crowd was really, really important for me in this situation,” Alcaraz said. “I felt the energy of the crowd pushing me up. I think without the crowd, it couldn’t be possible to be here.”Canadian 12th seed Felix Auger-Aliassime reached his second straight Grand Slam quarterfinal, overcoming Frances Tiafoe 4-6, 6-2, 7-6(6), 6-4 in a fourth-round triumph at Flushing Meadows.Auger-Aliassime became the youngest man to reach back-to-back Grand Slam quarterfinals since Juan Martin del Potro in 2008-2009. The victory set a blockbuster showdown with 18-year-old Carlos Alcaraz.”It was a tough start from me, a lot of nerves,” Auger-Aliassime said. “After I tried to recover I felt like I could have been able to break back in the first set but it is what it is, you’ve got to accept it.”I played a great second set. That third set was almost a coin toss. I did feel like I had what it took to win that set and I just had to stay strong on my serve in the end. I’m really happy to be through.”Auger-Aliassime reached his maiden Grand Slam quarterfinal at Wimbledon in July, before he fell to eventual finalist, seventh seed Matteo Berrettini of Italy. A first major semifinal will be on the line when he meets 18-year-old Alcaraz for the first time.”He’s (Alcaraz) a great player. At some point age is just a number. He already feels like a player who’s established,” Auger-Aliassime said.”He’s playing some amazing tennis so I think we’ll see a lot of him, a lot of us, a lot of Frances in the future.”

Approached Kohli for the ball as I wanted to create pressure : Jasprit Bumrah