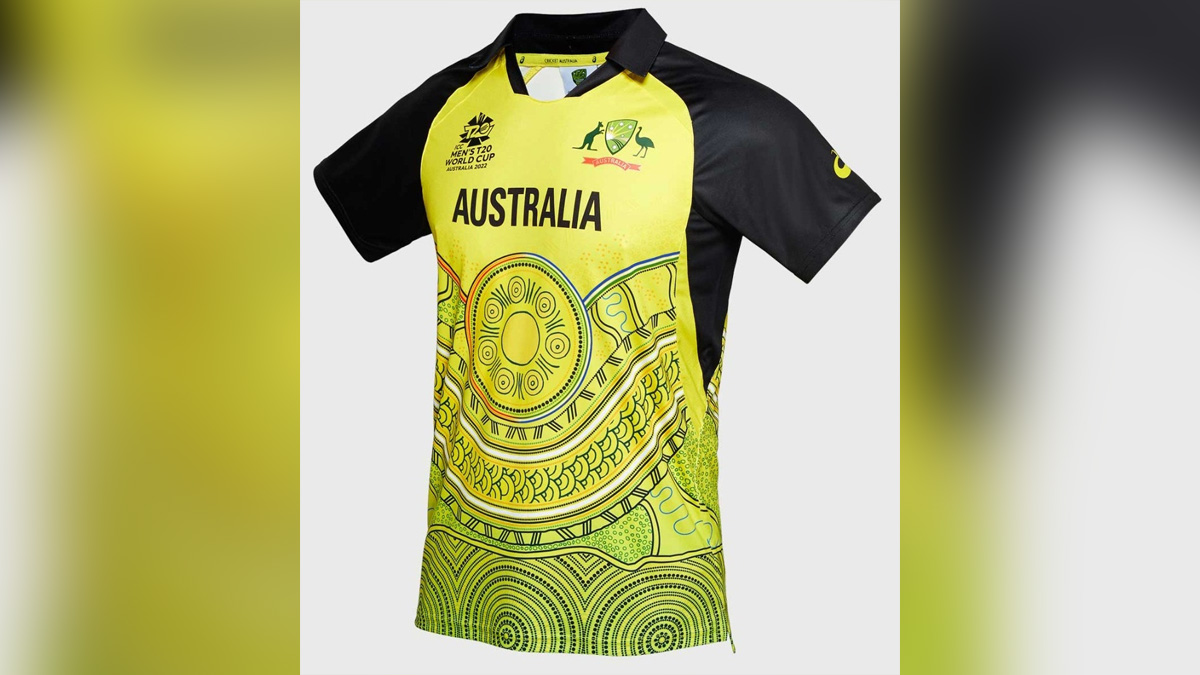 Dubai : Even as the buzz builds in India around the unveiling of the kit for the ‘Men in Blue’ for the ICC T20 World Cup in Australia in October-November, Australia revealed Aaron Finch’s men will wear an Indigenous-themed kit for the first time as they attempt to defend their crown on home soil.

While England have opted for a predominantly red kit, Aboriginal artwork will flow on the Australian jerseys, which have black sleeves and a green and gold gradient on the trunk of the playing top, as they seek to defend the T20 World Cup on home soil a year after lifting the trophy in the United Arab Emirates defeating trans-Tasman rivals New Zealand.

“The long-sleeved version will see the gold and green artwork extended onto the sleeves of the top, while the pants will be black and a cap will feature the colours of both the Aboriginal and Torres Strait Islander flags on the brim.

The kit was designed by Aunty Fiona Clarke and Courtney Hagen, in collaboration with Asics, with the pair having previously worked together on other Indigenous designs worn by Australia,” said a report in cricket.com.au on Wedneday.

As in previous designs, the Walkabout Wickets artwork that has become a prominent motif is again central on the front of the shirt, said the report.”Walkabout Wickets was painted by Clarke, a Kirrae Whurrong woman who is the great great grand-daughter of James ‘Mosquito’ Couzens, who played in the Aboriginal XI in a landmark match at the MCG in 1866, and also toured England in 1868, the first sporting team from Australia to play abroad,” added the report.

The report added that Clarke created the artwork ahead of the 2016 Boxing Day Test to commemorate the 150th anniversary of the 1866 match, and it has been included on the collar of the Test shirt ever since.

The jersey pays tribute to the past, present and emerging First Nations cricketers, and connection is an important theme for the kit.”The overall design is to do with the process of connecting with yourself as an individual, as a team, in the community and whatever is surrounded by you … with the river, the land, whatever you see,” said Clarke.

Hagen, a Butchulla and Gubbi Gubbi woman, said the design incorporated wickets to represent games played, and stars to signify ancestors.”In the middle we’ve been able to incorporate the colours of the both of First Nations flags in Australia.

So you’ve got the red, black and yellow, which is represents Aboriginal flag and the blue, white and green which represents the Torres Strait Islander flag.”Four Indigenous men and two Indigenous women have so far donned Australia colours in international cricket since the first Test in 1877.