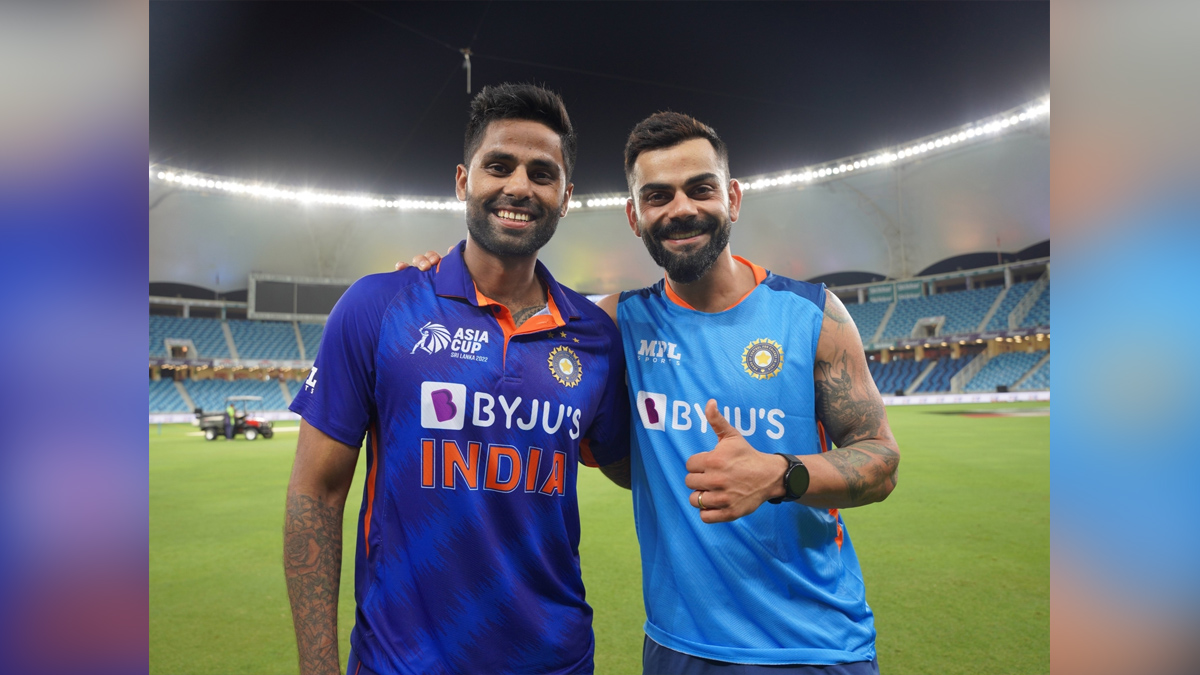 Dubai : After India’s innings against Hong Kong at Asia Cup 2022 wrapped at 192-2, talismanic batter Virat Kohli bowed down in front of Suryakumar Yadav after the latter slammed a blistering 68 off just 26 balls and said “kya hai yeh” (what is this, dude?).

Kohli’s reaction summed up the feelings of fans at Dubai International Stadium and of cricket watchers watching around the world as Suryakumar single-handedly changed the complexion of India’s innings.

At 94-2 in 13 overs, when KL Rahul’s struggle ended at 36 off 39 balls, Suryakumar brought out his drives, slashes, scoops and sweeps apart from audacious wrist play sending the ball all over the park, hitting six fours and as many sixes at a strike-rate of 261.53 to get a 40-run win over Hong Kong and seal their spot in Super Four stage.

“It was a heartwarming gesture from Virat Kohli as I hadn’t seen that before. But I was wondering why he wasn’t walking ahead and then when I realised, I asked him to walk together. He is much more experienced than me.

After the first innings and match ended, I said to him all the time that it was enjoyable batting alongside you.””The plan was clear and we were talking a lot on what to do after two-three balls. Having experienced people there was very necessary as I haven’t featured in as many T20I as he’s played.

But from inside, enjoyed a lot,” said Suryakumar in the post-match press conference.Suryakumar also shared a 98-run stand off just 42 balls with Kohli, who made 59 in 44 balls, hitting four and three sixes in his 31st T20I fifty and brought out some shots in the end as India fetched 78 runs in the last five overs to score a daunting 192-2, something which was a far possibility at the half-way mark score of 70-1.

“Situation was such that I had to bat like that. At the start, the wicket was a touch slow, but out in the middle, Virat bhai asked me to go and express myself. I had a very clear game plan on how I had to bat and the knock was very enjoyable,” added the right-handed batter.

During the match, we kept assessing what would be a good total, how the tempo should be like and how we should go about business at the back end.””It helps when the role for each batter is well defined.

Even if I hadn’t fired, one of Rishabh (Pant) or DK bhai (Dinesh Karthik) or Jaddu bhai (Ravindra Jadeja) would have done the job for the side.There is enough firepower in the unit to post very good first innings totals.

It will happen.”Suryakumar signed off by appreciating Hong Kong, who had some good displays with bat and ball despite falling 40 runs short at the end.”We tried our best to widen the winning margin.

But I think they (Hong Kong) showed very good fight at the end. They have also done some things right to qualify for the Asia Cup and play against us.””They played really well and in the second innings, the wicket also became a little easier to bat. Of course, credit goes to them. But very happy with the win.”