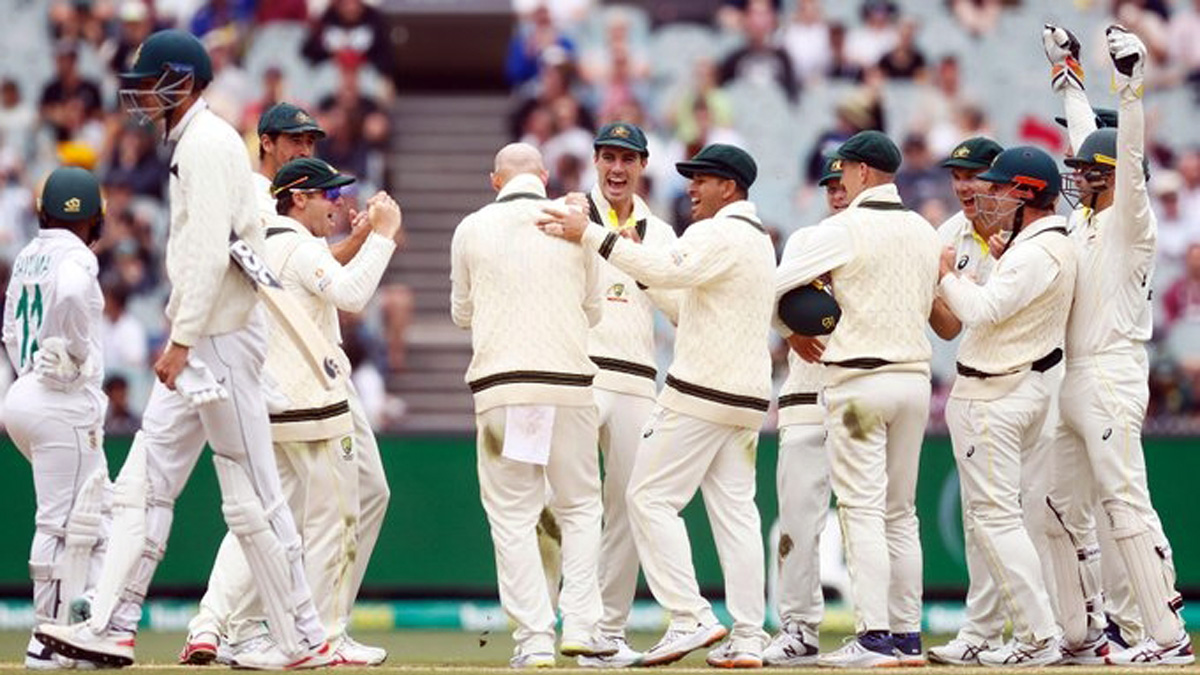 Melbourne : Spinner Nathan Lyon claimed 3-58 while replacement-pacer Scott Boland bagged 2-49 as Australia bowled out South Africa for 204 in their second innings to hand the visitors an embarrassing innings and 182 runs defeat in the second Test and wrapped up the three-match series 2-0 on Thursday.

The win in four days follows their humiliating 6-wicket thrashing within two days at the hands of the hosts in the first Test at Brisbane. The third and final Test will be played in Sydney from January 4.
Australia have boosted their chances of appearing at next year’s ICC World Test Championship (WTC) final and put a big dent in South Africa’s hopes with a dominant victory over the Proteas in the Boxing Day Test in Melbourne.

Pat Cummins’ side wrapped up the innings-and-182-run victory midway through the fourth day of the Test, with experienced spinner Lyon (3-58) and seamer Boland (2-49) doing the majority of the damage on Thursday to complete the MCG rout.

The victory sees Australia open up an insurmountable 2-0 series lead on the Proteas and helps them extend their lead at the top of the World Test Championship standings.
South Africa resumed on the fourth day at 15/1 and needed a miracle to try and work their way back into the Test, with Temba Bavuma (65) and Kyle Verreynne (33) offering some brief resistance during a 63-run stand for the fifth wicket.

But Boland broke the partnership when he trapped Verreynne LBW and then Lyon wrapped up the tail to ensure Australia cruised to victory and yet another series triumph on home soil.
The 12 points Australia receives for the win takes them to 132 points from 14 matches this period, with their win percentage boosted to an impressive 78.57% following the victory, the ICC said in a report on its website.

It means Australia are well placed for a maiden appearance at the World Test Championship final at The Oval next year, with five Tests remaining this period (one against South Africa in Sydney and four in India during February and March) before the finalists are determined.

The top two teams qualify for the World Test Championship decider and South Africa’s chances of earning one of those two spots are further diminished following a second consecutive disappointing performance on Australian shores.

The Proteas arrived in Australia in second place on the standings and with expectations high, but back-to-back losses have seen Dean Elgar’s side slip to fourth on the updated table. India hold on to the second spot on the standings with a 58.93% win percentage and Sri Lanka (53.33%) rise to third and in front of South Africa (50%) after the Proteas’ efforts in Melbourne.

It was an abject surrender by South Africa at the MCG after they had suffered a humiliating defeat within two days in the first Test at the Gabba. That win was blamed on a “below-average” pitch in Brisbane, but their performance at the MCG could be hard to explain as they barely managed to cross 200 in their second innings.