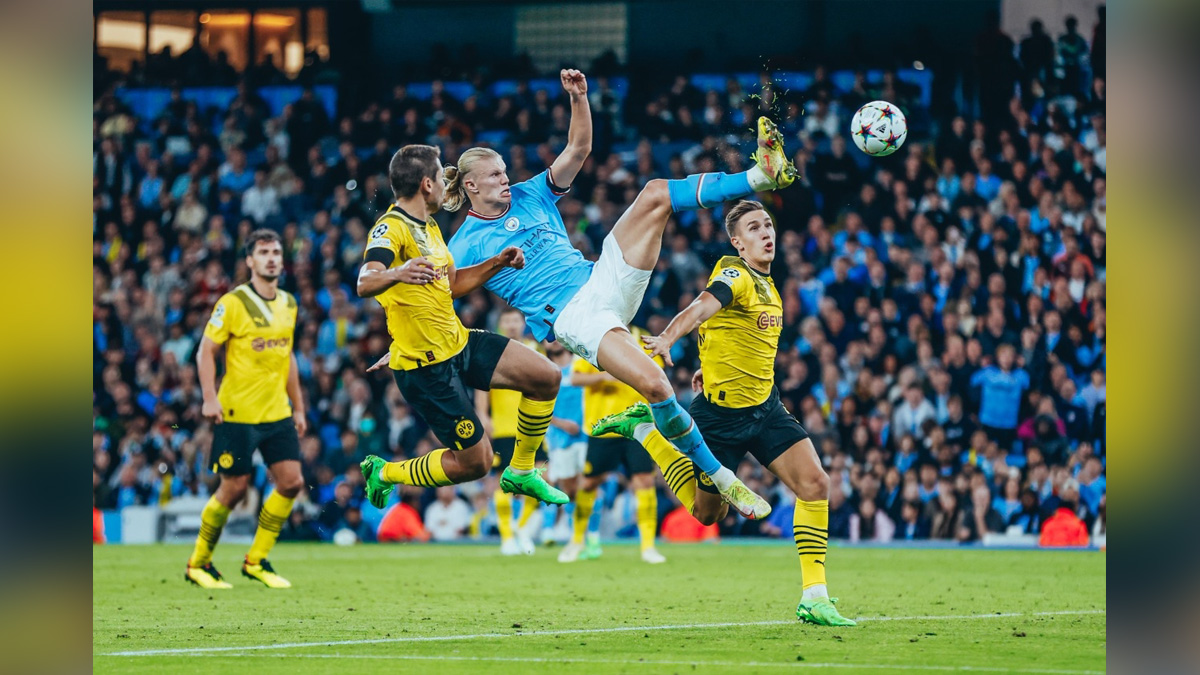 Champions League : No kisses for Haaland but a late artistic goal as Manchester City win 2-1

Manchester : Two stunning late goals helped Manchester City come from behind to beat Dortmund in their Group G match in the Champions League here.After a laboured first half, the visitors took the lead when Jude Bellingham stole in to head in Marco Reus’ driven cross.

City struggled to break the resilient visitors down, and it took a fine strike from John Stones from outside the box to level.That set the stage for Haaland’s spectacular winner against the side he departed this summer, converting a no-less stunning cross from Joo Cancelo.

while City won their second successive match in the group stage, the focus was on Haaland as he returned to the club where he became a star.Haaland might have received the kiss of his life back in September 2021.

At least it must have been one of the most surprising ones placed on his right cheek by Jude Bellingham after both had secured Borussia Dortmund’s 2-1 victory against Besiktas.The 22-year-old Norwegian continued his press briefing but could hardly speak as he failed to hide his amusement about his teammate’s actions.

That evening is said to have initiated the friendship both are talking about since playing together in the Dortmund shirt, followed by Bellingham’s profound confession after Haaland left for Manchester City this summer.

“I love him and I always will,” the former Birmingham midfielder stated in advance of the two sides’ Champions League duel on Wednesday.No kisses for him before kick-off, Bellingham stated on the Manchester pitch before laughing out loud.

The job ahead appeared daunting – stopping a man in a Champions League encounter who had scored 12 goals in his first eight games for City following 86 in the Dortmund shirt.

On Wednesday evening, when crossing swords with his former teammates, the Scandinavian forward needed patience for 84 minutes before the inevitable happened, an acrobatic strike marking his 13th goal of the season and sealing a narrow 2-1 victory.

After 80 minutes, John Stones had equalised after Dortmund had taken the lead through Bellingham, but it required a piece of hard work to kick the can down the road. It was City’s first shot on target.For long, Haaland seemed safely contained between Niklas Sule and Mats Hummels in the box.

But the experienced duo’s contribution wasn’t the only reason why Pep Guardiola’s team struggled to get Haaland in position or threaten Dortmund’s goal.To keep their former striker away from causing harm, the 2012 German champions closed gaps in midfield to interrupt the ball flow in direction of the blonde Norwegian.

A chain of three featuring Salih Ozcan, Emre Can and Bellingham did a good job despite a valuable pre-game comment by the Englishman.City, the 19-year-old said, isn’t only Haaland, “considering the team’s quality it might be the world’s best side,” before praising the Norwegian as a brilliant character and a brilliant footballer.”

Haaland left the pitch a minute in advance of the final whistle, sending a short salute to the City fans. He had done his job, in the end, reports Xinhua.And Bellingham? The Dortmund midfielder received a long hug after the game.

As it seemed, at least for him, it wasn’t the right day to give out more kisses to Erling Haaland.”Pretty disappointing as we gave them a little to work with. But I knew it was going to be him, to be honest. You give him a single yard and…,” Bellingham said after his friend’s late goal.