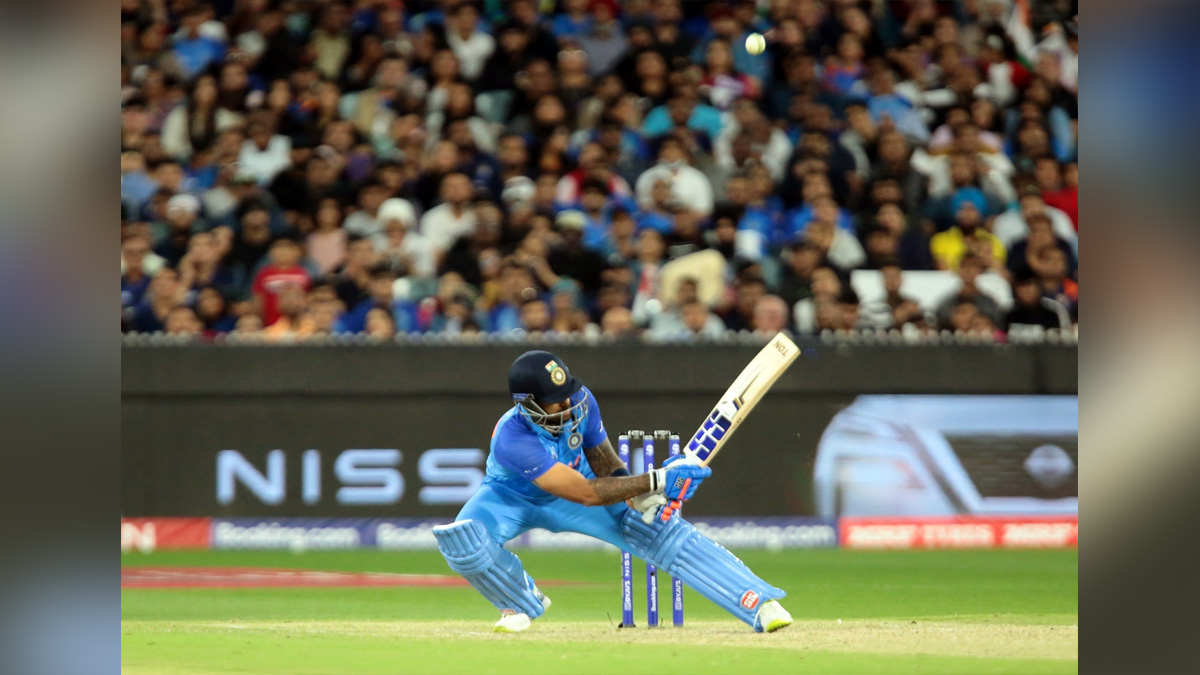 Adelaide : In the ongoing Men’s T20 World Cup, Suryakumar Yadav has risen above all the challenges a batter faces on his first trip to Australia to be the most impactful cricketer of the tournament.

With his 360-degree game and adeptness at playing the cut, pick-up off wrists, pull, lofted as well as along-the-ground drives, conventional as well as reverse sweeps and scoops, Suryakumar’s huge repertoire of shots have made bowling attacks scratch their head on how to stop this unstoppable force of batsmanship.

India skipper Rohit Sharma, who has seen Suryakumar grow as a player and person while playing for Mumbai in domestic cricket and Mumbai Indians in the IPL, feels that the right-hander has been showing great maturity since bursting on the international scene in 2021.

“Although we didn’t have a great World Cup, but looking at what he’s done in the entire year from that World Cup onwards, as we say, the sky’s the limit for him. But he’s shown great maturity, as well.”He has taken pressure from a lot of the guys the way he plays, and it rubs off on the other side, as well, when they bat around him.

We do understand his game pretty well, and we do understand what the bowler is trying to do well when he’s batting. So it’s a collective of everything,” said Rohit in the pre-match press conference.

Since the time India had a new leadership group in Rohit as captain and Rahul Dravid as head coach, Suryakumar has been thriving in T20Is, paving the way for him to be the top-ranked T20I batter and first Indian to amass 1,000 T20Is runs in a calendar year.

Rohit thinks that Suryakumar’s fearlessness comes with an attitude of not carrying extra baggage irrespective of the situation the side is in. “That’s probably his nature. That’s where it comes from. I think he’s the sort of guy who just doesn’t carry any baggages with him not his suitcase.

“He’s got a lot of suitcases, honestly speaking. He loves his shopping (laughs). But when it comes to carrying the extra pressure, extra baggages, I don’t think he has that in him. You can see that when he plays. It’s not like he’s played a couple of tournaments like that.

“He’s been playing like that for a year now, and it shows, and you can judge the kind of character he is, and he likes to play like that. I don’t know if you’ve heard him talk in interviews; he likes to bat in a similar fashion where we were 10 for 2 or 100 for 2.

He likes to go out and express himself, and that’s probably the reason he was in the team in the last World Cup.”Though people are in awe of Suryakumar’s unconventional strokeplay, Rohit also believes that bigger the dimensions, better it is for the right-hander to showcase his array of shots.

“He understands he likes playing on the big ground. He hates playing on small grounds. As he told me once, he doesn’t like the smaller boundaries, smaller grounds. He can’t see the gaps. I believe that he likes to see big gaps, and that’s where his strength is.”

England captain Jos Buttler, who would be planning his team’s strategies on countering Suryakumar in the semifinal at the Adelaide Oval on Thursday, admitted to feeling great on watching him bat. But Buttler was quick to point out that his team won’t be carried away from planning for other Indian batters while pondering over stopping ‘Sky is the limit’ show.

“He’s been great to watch, hasn’t he. He’s someone who has probably been the batter of the tournament so far in terms of the way you want to watch someone go about it.His biggest strength looks to be the amount of freedom he plays with.”

“He’s obviously got all the shots, but he allows himself to play all the shots, as well. He’s got a very free mindset from what I can see. But as with any batsman in the world, it takes one chance to create a wicket.

We desperately need to find a way to do that, and it would be remiss just to think about him. I think they have some other excellent players, as well.”