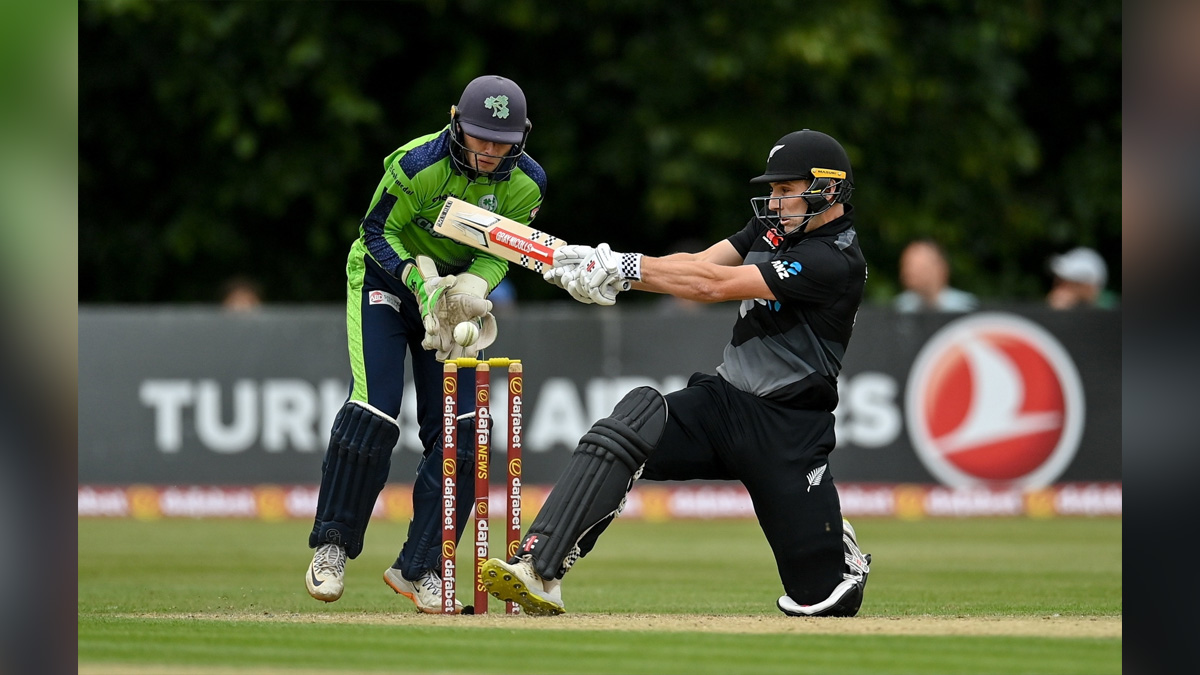 Stormont : Dane Cleaver hit his maiden T20I fifty, an unbeaten 78 off 55 deliveries, while Michael Bracewell took a hat-trick and Ish Sodhi ran through the middle-order to give New Zealand a series-sealing victory over Ireland by 88 runs.

After Cleaver’s efforts took New Zealand to 178/4, Sodhi ran through the Irish middle-order with 3-21 and Bracewell finished off things in style with a hat-trick in his very first over in T20Is to bowl out Ireland for 91 in 13.5 overs, taking an unassailable lead in the series with one match still to play.

Pushed into batting first, Finn Allen looked to attack from the off, pulling the fourth ball he faced by Craig Young for a six and lofting Barry McCarthy’s first ball high and handsome over the leg-side.

He raced to 35 off 20 balls before slicing Josh Little back over the bowler’s head, with McCarthy running in to take an excellent sliding catch.

Despite conceding 40-0 in the first four overs, Ireland restricted New Zealand to 34-2 in the next six. The Black Caps switched gears upon entering the second half of the innings, striking 48 runs between overs 11 and 14.

They were particularly severe on McCarthy as Cleaver played an audacious reverse-scoop for six and Glenn Phillips guided a more orthodox boundary down to the same third area.

With Phillips also smashing Little over midwicket for six, he seemed set for a repeat of his Player of the Match performance in the first T20I.

But Young once again provided the breakthrough, locating the right length to beat Phillips’ attempted off-side stroke and taking out his middle stump.But there was no dislodging Cleaver, who having taken his time to get set, put together a match-winning innings.

He enjoyed one significant slice of good fortune as Lorcan Tucker missed a stumping on 40, but deserved his maiden international half-century, brought up with a flicked six over deep square-leg.

With Cleaver muscling the first ball of Young’s final over for six, and he and Daryl Mitchell hitting three fours off the first four balls of the 19th over, it seemed as if New Zealand might be headed towards 190.

But an excellent finish from Little and Mark Adair kept the target to 180, keeping Ireland in the contest. Little bounced out Mitchell as Tucker completed the catch, while a Cleaver slice over backward point was the only boundary Adair conceded in his final over.

In the chase, Paul Stirling got going straight away in reply, flicking the third ball of the chase off his pads for six. Three more boundaries followed, two hammered through the off-side and one wristed down the leg-side, but his dismissal, lofted without distance to the fielder, precipitated a slide which Ireland failed to halt.

Gareth Delany was bowled first ball by Jacob Duffy, with the in-form Harry Tector run out soon after to leave the hosts 27-3, one ball into the fifth over.

Andrew Balbirnie and Curtis Campher both found the fine-leg fence in the sixth over, the captain clipping stylishly and the all-rounder ramping inventively, but the respite was only temporary, with the tumble of wickets soon resuming.

Balbirnie drove at a full, wide ball but could only edge behind before Ish Sodhi’s double-strike left Ireland 45-6 and in deep trouble.

Tucker was stumped, attempting to slog-sweep and setting off for a single, believing the ball had beaten the keeper before turning back too late, while George Dockrell was caught at slip as New Zealand went on the attack.

Campher tried to keep up the fight, skipping down the track to pump Mitchell Santner down the ground for four, but his resistance was also ended by Sodhi, the leg-spinner catching out the right-hander with some extra bounce and a top-edged cut looping to backward point.

Adair mounted a mini-fightback, lofting Santner over the off-side before hitting Sodhi for two fours and a six in consecutive balls. McCarthy also got in on the act, slapping James Neesham over mid-off and slog-sweeping Michael Bracewell for four.