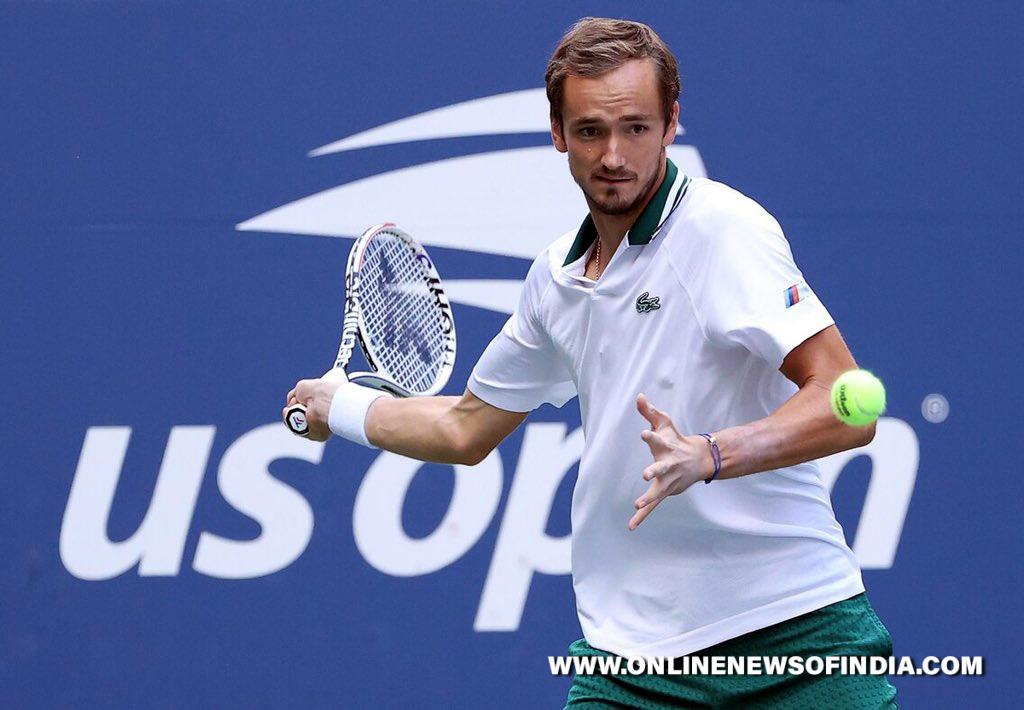 New York : Second seed Daniil Medvedev of Russia continued to emerge as a strong contender for the US Open title moving past Daniel Evans of UK 6-3, 6-4, 6-3 to reach the quarterfinals of the year-ending Grand Slam.The 25-year-old is yet to drop a set in New York and has been in strong form since the Tokyo Olympics, winning his fourth ATP Masters 1000 crown in Toronto, before reaching the semifinals in Cincinnati. Medvedev’s one-hour 43-minute victory over Evans, in which he struck 24 winners, means he now holds a 15-2 record since Wimbledon.”Today I liked my serve better,” Medvedev said. “But there was one forehand return that for me was the best shot of the match, so if we take one shot it has to be this one, but if we take the whole match it has to be the serve,” Medvedev told atptour.com.The Australian Open finalist is aiming to win his first major at Flushing Meadows, a tournament in which he has fond memories. In 2019, the 12-time tour-level titlist rallied from two sets down to force a fifth set against Spain’s Rafael Nadal in his maiden major final, before not dropping a set en route to the last-four last year.”First time when I came back last year [after his final defeat to Nadal in 2019] I had some good memories,” Medvedev added.

“Now, I just want to make it to the final again to have another one to remember and hopefully a better one.”Medvedev will face qualifier Botic van de Zandschulp of Netherlands in the last eight as he aims to reach his fourth major semifinal after the Dutchman upset 11th seed Diego Schwartzman in five sets.Evans was competing in the fourth round at the US Open for the first time in his fifth main draw appearance in New York. The 24th seed overcame Australian Alexei Popyrin in a fifth-set tie-break in the third round to set up his meeting with Medvedev.Van de Zandschulp extended his breakthrough run at Flushing Meadows when he battled past 11th seed Schwartzman 6-3, 6-4, 5-7, 5-7, 6-1 to reach his first major quarterfinal.The 25-year-old, who earned a career-best win over world No. 11 Casper Ruud of Norway in the second round, produced big-hitting tennis and recovered from squandering two match points in the fourth set to secure another upset after four hours and 19 minutes.”I played so many matches here, some of them I was on the brink of defeat, and for the first time in the tournament I have won the first set,” van de Zandschulp said. “The first two I almost ended up losing the match, but I am glad I won in the end.”The World No. 117 had never been beyond the second round at a major before his run in New York.”The atmosphere was great,” van de Zandschulp added. “I couldn’t let you guys down. The first for me in America and it has been great. I think before the tournament nobody expected me to reach the quarterfinals here and I hope they are proud in the Netherlands.”