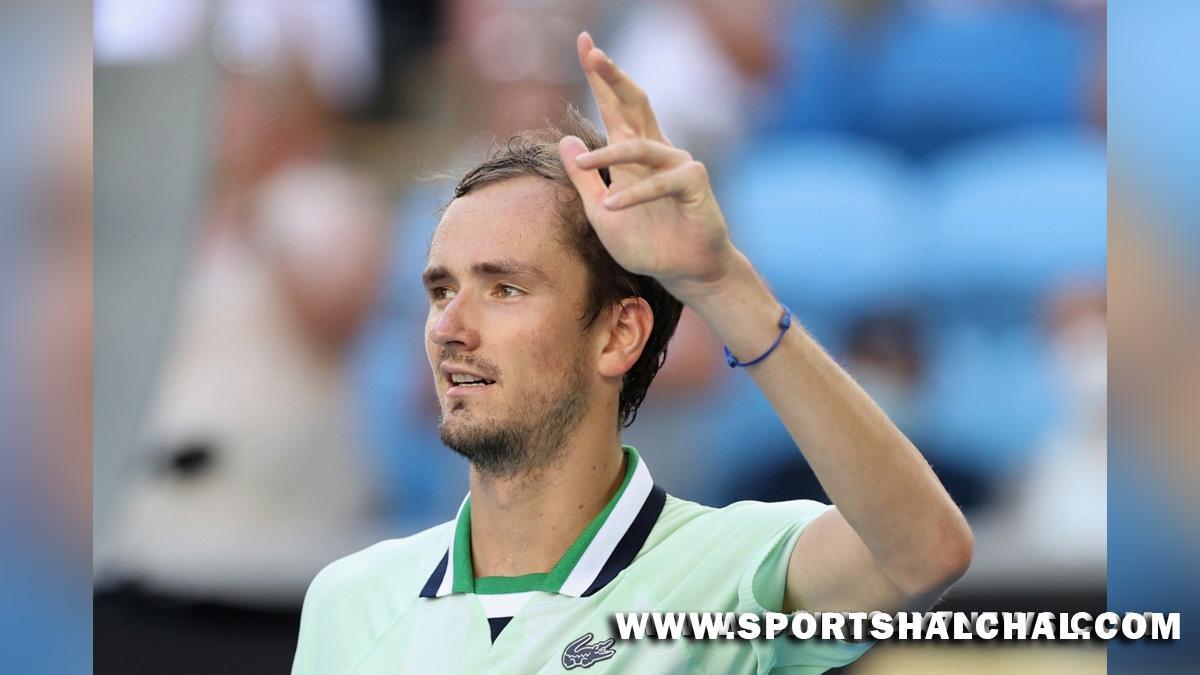 Melbourne : World No.2 Daniil Medvedev of Russia showed no signs of fatigue after the gruelling match against Nick Kyrgios, as he crushed Dutchman Botic van de Zandschulp 6-4, 6-4, 6-2 on the Margaret Court Arena to cruise into Round 4 of the Australian Open here on Saturday.The 2021 US Open champion, who battled past home favourite Kyrgios in four sets on January 20, produced a commanding performance against van de Zandschulp, as he advanced after a one-hour-and-55-minute contest.”I am really happy because every round at a Grand Slam is very tough,” Medvedev said after his straight-sets win against the world No. 57.”Even today the score doesn’t show this, but I feel like it was a much tighter match than the score showed. Hopefully I can play here many more years. I hope there will be more good times than bad times otherwise it doesn’t work,” Medvedev was quoted as saying by atptour.com.

The 25-year-old now leads van de Zandschulp 2-0 on the ATP, with their other meeting coming in the quarterfinals at the US Open in September. Medvedev defeated the 26-year-old in four sets at Flushing Meadows before going on to win his maiden major trophy.Medvedev has now reached the fourth round in Melbourne for the fourth consecutive year. The Russian’s best result at the first slam of the season came a year ago when he advanced to the final, losing to Serbia’s Novak Djokovic.The 13-time tour-level titlist will next face either Frenchman Maxime Cressy or Australian wild card Christopher O’Connell.Medvedev played from deep behind the baseline on return against van de Zandschulp, neutralising the Dutchman’s big serve with his flat strokes. The Russian never looked rushed from the baseline, dealing with everything thrown at him.Van de Zandschulp was making his second appearance at the Australian Open, having lost to Spaniard Carlos Alcaraz in the first round on debut last year.Medvedev is looking to become the first player to follow his first Grand Slam title with his second major at the next event.