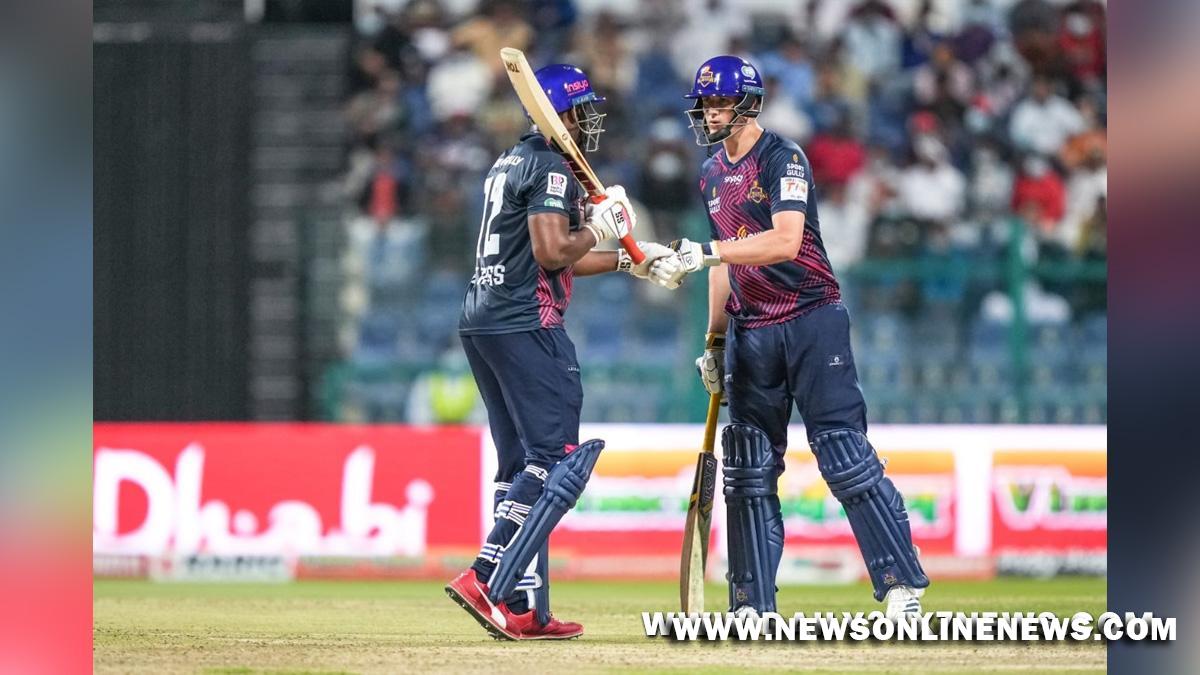 Abu Dhabi : Deccan Gladiators crushed Delhi Bulls by 56 runs to clinch their maiden Abu Dhabi T10 title, with opening batters Andre Russell and Tom Kohler-Cadmore putting up an unmatched batting display to take the winners to an imposing 159 runs without the loss of any wicket.Set a target that was always going to be difficult to say the least, Delhi Bulls couldn’t find the momentum during their chase and eventually fell short by 56 runs on Saturday night.Chandrapaul Hemraj tried to get things going for the Bulls, as he smacked Russell for two boundaries and a six in the fifth over. However, he kept losing partners at the other end. Hemraj played a breezy innings of 42 runs off 20 balls, but his stay at the crease ended when he was dismissed by Sri Lanka’s Wanindu Hasaranga in the sixth over.Post Hemraj’s departure, the Deccan Gladiators kept putting pressure on their opponents and eventually walked off the field as champions.

Odean Smith, Wanindu Hasaranga and Tymal Mills picked up two wickets each.Earlier, Andre Russell and Tom Kohler-Cadmore recorded the highest partnership in the history of Abu Dhabi T10. The opening batters strung an explosive partnership of 159/0 in 10 overs. Andre Russell played a scintillating innings of 90 runs from 32 balls, laced with nine fours and seven sixes and he was ably supported by Tom Kohler-Cadmore, who smashed 59 runs from 28 balls. Kohler-Cadmore hit three fours and five sixes during his innings.Russell took on Dominic Drakes, smacking him for two sixes in the third over and then he struck two boundaries and a six off Dwayne Bravo’s bowling in the fifth over. The West Indian also smashed Romario Shepherd for two boundaries and a six in the eighth over. Kohler-Cadmore also upped the ante in the last over, hitting a six and a four off Bravo’s bowling, helping the Gladiators post an imposing total.Delhi Bulls’ Shiraz Ahmed, who took six wickets in the tournament, won the ‘UAE Player of the Tournament’ award. Dominic Drakes won the ‘Bowler of the Tournament’ award. The Delhi Bulls speedster picked up 19 wickets in the Abu Dhabi T10.Rahmanullah Gurbaz bagged the ‘Batter of the Tournament’ award. The Delhi Bulls batter scored 343 runs in the tournament. Wanindu Hasaranga was adjudged the Player of the Tournament. The Deccan Gladiators leg-spinner was also the highest wicket-taker with 21 wickets.
Brief scores: Deccan Gladiators 159/0 (Andre Russell 90 not out, Tom Kohler-Cadmore 59 not out) beat Delhi Bulls 103/7 (Chandrapaul Hemraj 42, Adil Rashid 15 not out; Wanindu Hasaranga 2/20) by 56 runs.