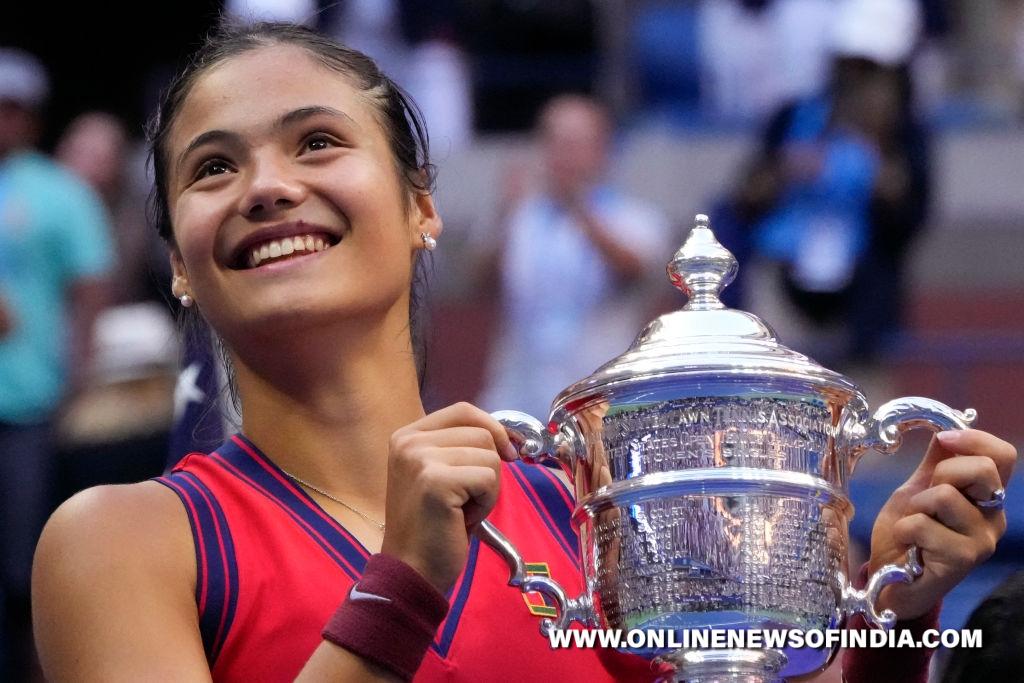 New York : US Open champion Emma Raducanu of Great Britain, who defeated Leylah Fernandez of Canada in the last Grand Slam of the year, has jumped 127 spots in this week’s WTA Rankings, moving from No.150 to No.23.Raducanu started the year at No.345 (as the British No.11), but her ranking has been on a rapid climb in the past three months. The teenager has won 21 of her past 25 matches. After reaching the fourth round at Wimbledon as a wildcard, Raducanu’s ranking improved from No.338 to No.179, helping her secure a spot in qualifying at the US Open.The final Grand Slam of the 2021 season produced the first all-teen final in 22 years, causing a shakeup among this week’s rankings. For the first time in six years, Britain has a new top player, while Canada boasts two women in the top-30 for the first time in 34 years.By winning the US Open as a qualifier, Raducanu earned 2,040 points. She also overtakes Johanna Konta as the highest-ranked woman from Britain. Konta had held the distinction for 310 consecutive weeks (since the week of October 5, 2015).US Open runner-up Leylah Fernandez jumped 45 spots, climbing from No.73 to No.28.

Fernandez joins fellow Canadian Bianca Andreescu (No.20) in the top-30, giving Canada two women ranked in that range for the first time in 34 years. The last time it happened was the week of September 14, 1987, with Helen Kelesi at No.29 and Carling Bassett-Seguso at No.30.Egypt’s Mayar Sherif continued her breakthrough season. She moved to a career-high ranking of No.74, a 22-position improvement from No.96. After falling to Raducanu in the final round of qualifying at the US Open, Sherif quickly rebounded by capturing the title at the WTA 125 series event staged in Karlsruhe, Germany.Sherif defeated Italy’s Martina Trevisan in the final. The run to the final also allowed for Trevisan to reach a career-high ranking of No.79. She climbed 27 spots (from No.106).While Ashleigh Barty of Australia and Aryna Sabalenka of Belarus remain unchanged atop this week’s rankings, quarterfinal runs have pushed Karolina Pliskova of the Czech Republic up one spot to No.3 and Elina Svitolina of Ukraine up one to No.4.Barbora Krejcikova of the Czech Republic and Maria Sakkari of Greece both hit new career highs. French Open champion Krejcikova moved up two spots from No.9 to No.7 after reaching the quarterfinals on her US Open main-draw debut, while Sakkari climbed five spots from No.18 to No.13 after making her second Slam semifinal of the year.American Coco Gauff rose four places to make her top-20 debut at No.19, while Liudmila Samsonova of Russia broke the top-50 for the first time with a four-spot rise to No.48.

When playing against Australia, we are a ‘bit more pumped’: Smriti Mandhana

Parents played a huge part in my upbringing: US Open champ Emma Raducanu