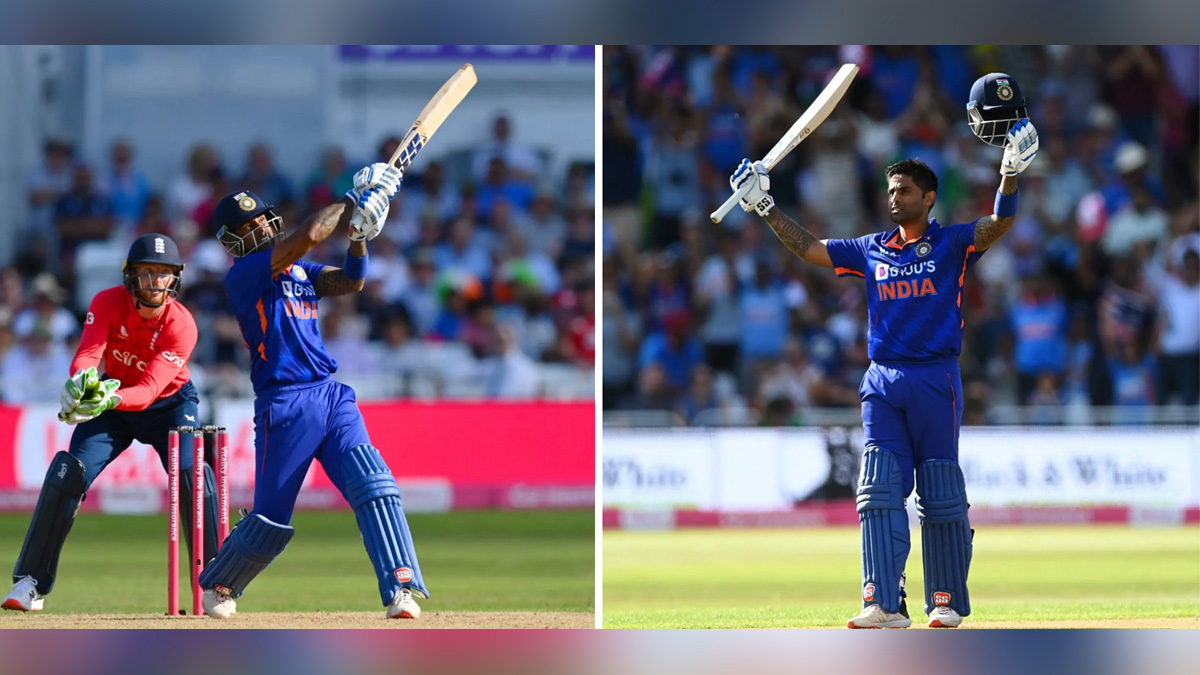 Nottingham : Suryakumar Yadav produced one of his best knocks in international cricket with a stroke-filled 117 off 55 balls, his maiden century in T20Is. But it was not enough for India to avoid a 17-run loss against England in the third T20I at Trent Bridge on Sunday.

After Dawid Malan’s fine 77 and an unbeaten 42 from Liam Livingstone took England to 215/7, Suryakumar combined immaculate timing, audacious shots and scored runs across all areas in the ground with ridiculous ease to almost single-handedly win the match for India.

But lack of support from other batters and some great bowling from England meant India were restricted to 198/9 in 20 overs. It was a match where 413 runs were made overall under sunny blue sky and short boundaries at Nottingham, a perfect setting for England to take a consolation win while Suryakumar dazzled the most even in a losing cause.

Reece Topley struck with his first ball, claiming a faint inner edge of Rishabh Pant’s swipe across the line, going behind to keeper Jos Buttler. Virat Kohli flicked David Willey over mid-on for boundary and followed up with a clean loft down the ground for six.

But Kohli’s time at the crease was short-lived as he stepped out to slap through covers, but was caught out at short extra cover on the very next ball. Rohit Sharma took two boundaries off Topley, including a one-handed whip off the hips through backward square leg.

But on the last ball of fifth over, Topley bowled a slower ball which Sharma pulled straight to deep mid-wicket.Post power-play, Suryakumar brought out his square drive and wristy whip to hit four and six on successive balls off Willey.

He then welcomed Liam Livingstone by striking three fours off his four balls – a cut through backward point was followed by two wristy whips through fine-leg.After bringing up his fifth T20I fifty in 32 balls with a single off Topley, Suryakumar hit sixes over short backward square leg and long-on off Livingstone.

His elegant wristy stroke-play continued when he lofted inside-out over backward point for a six off Richard Gleeson and followed it up by shuffling to sweep through fine leg for a boundary.

Suryakumar did not spare Chris Jordan, sweeping through fine leg and carved past extra cover for back-to-back boundaries and ended the over with a wristy steer over point for six.

Topley broke the 119-run stand when his slower, short ball cramped Shreyas Iyer for room and sent an edge behind to Buttler.After guiding one over backward point for a boundary, Suryakumar reached his century in 48 balls by steering the low full toss from Willey, splitting backward point and short third man to perfection.

Willey ended the over by trapping Dinesh Karthik lbw after challenging the on-field verdict.Gleeson made it another lbw dismissal in five balls with the scalp of Ravindra Jadeja off a dipping yorker.

With 41 needed off last two overs, Suryakumar steered Moeen Ali through third man for a boundary before hammering a six over long-on and hitting another boundary through third man, benefitting from two wides as well.

But Ali bounced back on the fifth ball, having Suryakumar holing out to long-off, ending a remarkable knock at 117. Jordan took out Harshal Patel and Ravi Bishnoi on the last three balls of the innings to seal a win for England.

Earlier, electing to bat first, Buttler began by smashing Umran Malik for two boundaries through the off-side, sandwiched between a huge six pulled over deep mid-wicket. Just as Buttler looked set for a big knock, he dragged a slower length ball from Avesh to his stumps, falling for 18.

India almost had their second wicket of power-play had Malan not been dropped by Patel off his own bowling. After Malik got Jason Roy out in his second over, with extra bounce taking a nick behind to Pant on a slash, Patel completely bamboozled Phil Salt, knocking his off-stump with a dipping slower low full toss.

Malan continued to chip away despite the loss of wickets, slog-sweeping Bishnoi off a no-ball for boundary. He followed it up by cutting Jadeja through cover for a boundary and then swinging high over square leg for a six.

He brought up his 12th T20I fifty with a brace off Malik and then hit the tearaway pacer for successive boundaries.Malan and Livingstone hit Avesh for a six each in the leg-side before the former smacked Jadeja for another six, slogged down the ground.

Livingstone dispatched Patel for back-to-back sixes on full tosses over fine leg. But Bishnoi ended Malan’s stay at 77 in the 17th over with the top-edge grabbed easily by Pant.

One brought two for Bishnoi as Ali fell for a golden duck, with the leading edge on slog snapped by point.Livingstone and Harry Brook hit three boundaries, including off a no-ball, to take 21 off Avesh’s final over.

Livingstone was given a reprieve at 36 when Kohli dropped a catch at deep mid-wicket off Patel.But the pacer had his second wicket on the fifth ball of 19th over when Brook pulled, only for the top-edge to be taken by deep mid-wicket.