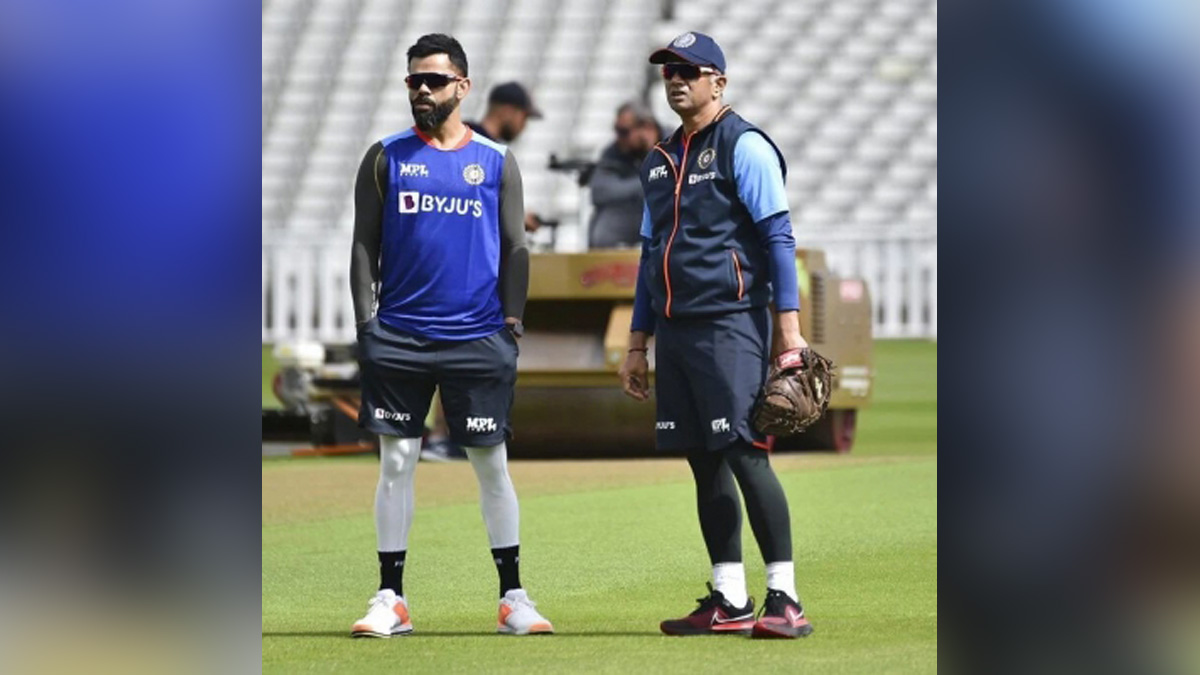 Eng vs Ind: With him, it is not lack of motivation or desire, says Rahul Dravid on Virat Kohli’s century drought

Birmingham : India head coach Rahul Dravid on Wednesday said that he is not too much worried about Virat Kohli’s century drought, adding that the star batter doesn’t lack motivation or desire to succeed rather than he has been the victim of his own lofty standards.

The 33-year-old Kohli has been in something of a rut. He has gone more than 100 innings in all forms of cricket including IPL without scoring a hundred since hitting 136 in Kolkata against Bangladesh in November 2019.

He has often got starts but he hasn’t been able to convert them into big scores.The former Indian skipper has even reached fifty several times since that innings in Kolkata but hasn’t managed to hit his 71st international century yet.

“He’s an incredibly fit guy, one of the most hard-working I’ve ever come across – his desire, his hunger, his attitude to looking after himself, his preparation,” said Dravid in a virtual press conference.”Even the way he played the game against Leicester, in the kind of conditions out there, scoring the 50-60 he did.

He’s ticking all the right boxes, he’s doing what he needs to do to come out of it.”As players, you go through these sorts of phases. I don’t think in Virat’s case it’s any lack of motivation. It’s not so much about focussing on those three figures.

Even a 70 on a difficult wicket in Cape Town, I thought it was a very good innings, even if it didn’t convert into a three-figure score,” he added.Dravid also mentioned that more than scoring centuries, India wants Kohli to chip in with match-winning contributions.

“A guy like him, the kind of standards he’s set and the number of hundreds he’s scored, people only see hundreds as a success. But for me, from a coach’s perspective, we want match-winning contributions from him, whether that’s a 50 or a 60,” he said.

“From our perspective, there’s not so much focus on three figures. From us, it’s the contributions – he continues to contribute on and off the field, the way he carries himself, he does inspire a lot of the guys in the group,” he added.

India are on the brink of securing their first Test series victory in England since 2007. However, they face an England side riding high on momentum under the new leadership of coach Brendon McCullum and captain Ben Stokes.

They swept New Zealand – the reigning ICC World Test Championship winners – 3-0 at home while India will only have played one warm-up match against Leicestershire heading into the Test.

England have adopted a high-risk, high-reward strategy under McCullum and Stokes, a move that helped them secure convincing victories against New Zealand, but Dravid believed irrespective of the approach England adopted, India would have opportunities.

“Any way they play gives us opportunities, to be honest. We are leading the series 2-1. It’s up to us. We’ve to focus on our cricket, not worry too much about what England is doing and the way they are playing.We’ve to focus on what we’ve to do,” the coach said.

“To be honest with you, we’ve been on a pretty positive side as well. We were second in the World Test Championship cycle last year, this year we find ourselves third in the table, just underneath the top two. We’ve been pretty successful in getting 20 wickets and winning Test matches. That for me is positive cricket as well,” he added.

Playing Ravichandran Ashwin, Ravindra Jadeja together will depend on Edgbaston conditions : Ajit Agarkar