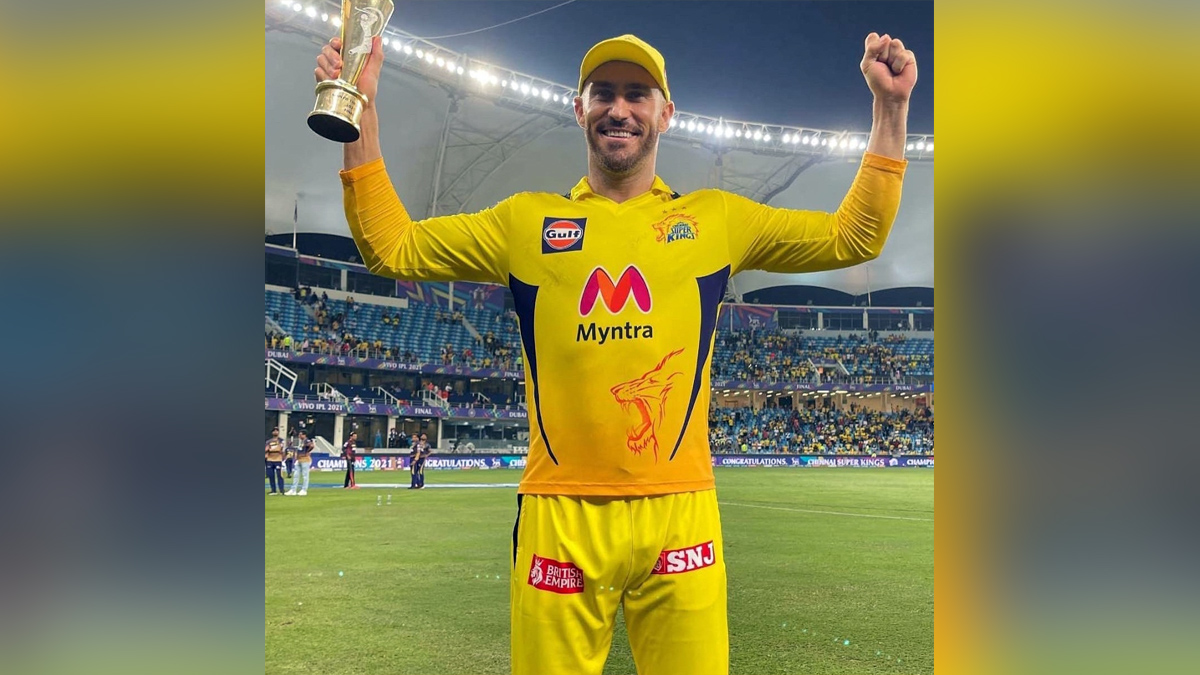 Johannesburg : Faf du Plessis on Thursday was named as the captain of Johannesburg Super Kings in the SA20 league, starting in January next year.The franchise, owned by Chennai Super Kings Cricket Limited (CSKCL), who also own Chennai Super Kings (CSK) in the Indian Premier League (IPL), have also got Stephen Fleming on board as the head coach while revealing the logo of the side.

Du Plessis, the former South Africa captain, had been picked by the franchise as one of its five direct signings alongside Moeen Ali, Maheesh Theekshana (both of them played for CSK in IPL 2022), Romario Shepherd and uncapped fast bowler Gerald Coetzee.

Du Plessis played 100 matches for Chennai Super Kings, first from 2011-15 and then from 2018-2021. “I have an extremely lucky and long relationship with Chennai. When the opportunity presented itself again, I was extremely happy with that.

I think it’s going to be (the SA20 league) incredibly crucial for the sustainability of South African cricket. I’ve almost been seeing first hand the difference that league cricket can have an impact on a country’s cricket.”

“Certainly been involved with the IPL for the last 10-11 years. You see the difference that it makes to the young generation and the young players, especially in that Indian cricket team and environment.

That knowledge and wisdom and experience that you can share across with your young talent in your own country, I think that’s extremely important for the growth of the national team.

The way that they’ve set up the league now looks like it’s going to be one of the big leagues across the globe,” said du Plessis on reuniting with CSK brand in SA20 league as captain of Johannesburg Super Kings.

Du Plessis further paid tribute to influences of various leaders during his time with South Africa and then at the CSK camp under Fleming as well as MS Dhoni. “I’ve been lucky as a player and as a captain to have some really good leaders in my time.

Starting under Graeme (Smith), then moving to AB de Villiers, then moving my time across to Chennai Super Kings, where Stephen Fleming was really influential at the beginning of my leadership journey.”

“To be around MS Dhoni, to just watch and observe exactly what he does on and off the field…I’m extremely grateful to have learned from so many great players and leaders in the game.

In terms of leadership, MS Dhoni has done the most. He’s the best guy to learn from.”Fleming has been CSK’s coach since 2009 after playing for them in inaugural IPL 2008 edition. “My last memory of being at the Wanderers was with Chennai (Super Kings), winning the Champions League.

I remember it very fondly, it’s a wonderful ground. First thing I remember was the support that we got through South Africa, which was a surprise for all of us.””It just shows the passion of the South African cricket fans to follow good cricket and we like to produce that.

We’re really hoping we can get good support from Johannesburg and around the country. That’s a big part of what Chennai is about,” said Fleming.SA20 will be the third time South Africa would be attempting to launch a franchise T20 league in the country.

In its previous attempts, the attempt to start Global League T20 failed to happen in 2017.Its replacement, the Mzansi Super League was held in 2018 and 2019 but didn’t get the big broadcast rights, with the free-to-air South African Broadcasting Corporation (SABC) getting broadcast rights for a much smaller sum.

The league hasn’t been played since 2020 due to Covid-19 pandemic and will now make way for the SA20.”We have been looking for opportunities for the past few years to get into outside franchise cricket. Cricket South Africa’s league is a very good opportunity.

Former South Africa captain Graeme Smith, who is the League Commissioner of SA20, was very excited by the prospect of CSK entering the SA20 bandwagon and du Plessis-Fleming partnership being reunited.

“We are very excited that we have been able to attract the likes of the Super Kings into South Africa. I mean they are an amazing franchise with a huge fanbase and the type of people you know with whom we can build a sustainable future with.

So, from our perspective we are very excited and we are looking forward to January (2023) and there is a lot of work that is taking place behind the scenes.””Cricket South Africa has made a long-term commitment into this tournament, cleared the ICC window for 10 years now. So, we are very excited about the opportunity that this league is going to bring to our game in South Africa.”