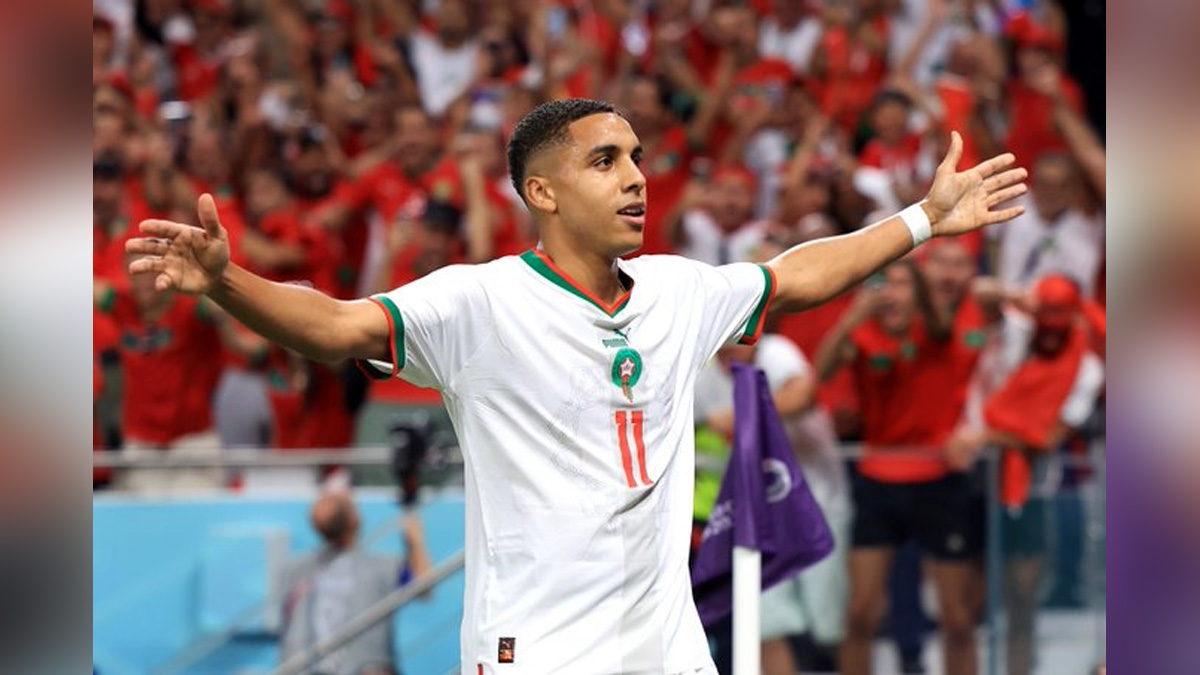 Doha (Qatar) : Morocco became the second African country to make it to the knockout stage of the 2022 FIFA World Cup after their 2-1 win over Canada in the Group F encounter on Thursday evening at Al Thumama Stadium.

The North Africans, who were backed by vociferous supporters, took an early lead to keep themselves on course for a place in the last 16 and join the other qualified team from Africa Senegal in the knockout phase of the tournament after emerging as winners in their group.

For Morocco, this is only the second time they are making it to the knockout stage since 1986 in Mexico when they defeated Portugal 3-1 on their way to the knockout stage. The Atlas Lions started their Qatar campaign with a 0-0 draw against the 2018 finalists Croatia and added another feather in the cap by defeating World No.2 Belgium 2-0 a few days ago.

With Thursday’s win, their second in the group, they finished with seven points and topped the group and will take on the runners-up in Group E, which contains Costa Rica, Germany, Japan and Spain, in the last 16.

The winners and runner-up from Group E will be spotted in Thursday’s late matches. Croatia finished second in the group with one win and two draws, collecting five points. But the disappointment of the tournament were Belgium as they ended up only having four points from three matches, winning one, losing one and drawing one game and crashing out of the tournament.

On Thursday, a huge blunder from goalkeeper Milan Borjan cost Canada an early goal. Man of the Match in the Belgium game, Hakim Ziyech was once again on the spot to find the net. The Chelsea winger, who provided the spark for a number of his team’s advances throughout the tournament, gave the Morrocans the early lead.

After receiving the ball just outside of the box in Canada’s half, defender Steven Vitoria sent in a rather casual pass to the goalkeeper. However, the defender failed to see the advancing attacker behind and Borjan was forced to dispatch the ball quickly.

Undoubtedly panicked, the goalkeeper cleared the ball straight to Ziyech, who spotted the open goal and sent in a lovely chip which created enough distance to beat the keeper as he rushed back to the net. A goal in the very fourth minute, a horrid start for Canada from which they tried to fight back with The Reds looking to be in damage-control mode as Morocco smelt blood after taking the lead.

The Atlas Lions continued their high press and did well to keep to their lines and break down any attacks, while also having the flexibility to spring the occasional counter when play allowed. There was a thunderous roar that echoed across Al Thumama Stadium as Morocco consolidated the lead with En-Nesyri adding his name to the scorer’s list in the 23rd minute.

After receiving a long ball on the right side from near the halfway line, En-Nesyri, who was hounded by two defenders, was able to make a beeline for the net, his powerful shot at the near post beat the left hand of Borjan as Morocco double their advantage.

With their objective rather clear, Canada continued to hunt for opportunities to advance up the pitch. After the two blows, Canada were keener on instigating more attacks, but their long-ball tactics did not yield success.

Morocco on the other hand seem to have worked out their defensive scheme as they continue to spot gaps between the lines to try and applied pressure. Canada got a new lease of life with an own goal with five minutes to go for the first-half whistle.

After picking up the ball on the far left, Sam Adekugbe fired in a cross into the box. The ball, however, grazed the outstretched right leg of Nayef Aguerd, with the resulting deflection beating Yassine Bounou at the near post to find the net, 2-1.

In the second half, Canada kept their attacking and stepped up the pressure with the Moroccan defense suffering some anxious moments. Canada came close to drawing level midway in the second half when Atiba Hutchinson’s effort came off the crossbar from the centre of the box with Junior Hoilett having set up Hutchinson with a cross following a corner in the 71st minute.

Thereafter, Canada tried to score more goals but Morocco held on to register a deserving win and move into the knockout stage.