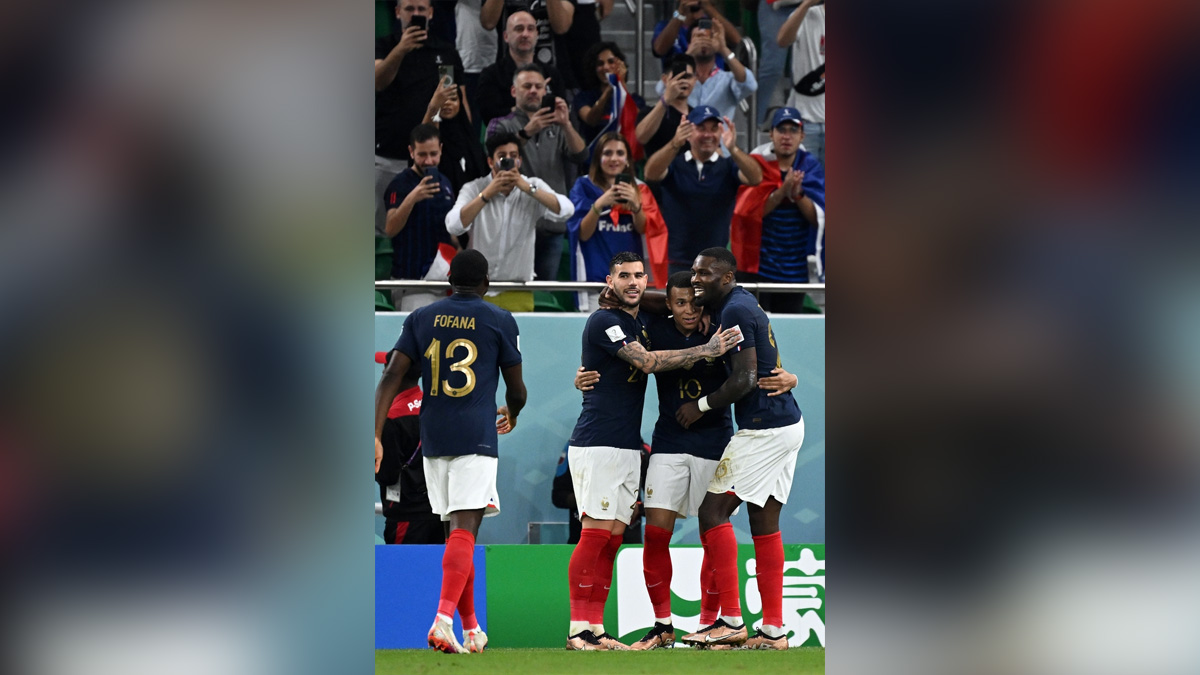 Doha (Qatar) : Defending champions France eased to a comfortable 3-1 win over Poland to make it to the quarterfinals of the FIFA World Cup. On Sunday at the Al Thumama Stadium, a brace from Kylian Mbappe and a record-breaking goal from Olivier Giroud helped Didier Deschamps’ team’s cause.

Poland’s Robert Lewandowski managed to get a consolation strike in injury stoppage time from the penalty spot. Giroud (44th minute) scored just before half-time to open the door, and Mbappe (74 and 90’+1) marched through it with two scorchers in the second half.

Lewandowski (90+9) scored in the ninth minute of stoppage time to salvage some pride. Poland, in the knockout stage for the first time since 1986 and looking for a first quarterfinal appearance since 1982, was the better team in the first half but could not convert their chances in the first while France managed to latch on to the chance to score with a minute left for the first half.

France’s goal-scoring move started with Dayot Upamecano, who gave the ball to Mbappe, 25 yards out in the inside-left channel. He threaded it down the side to Giroud, who essayed a left-footed drive across Wojciech Szczesny and into the corner.

It was Giroud’s 52nd goal for Les Bleus, which puts him one ahead of Thierry Henry and etched his name into the France history books as the all-time top scorer for the Les Blues. The Milan striker had equalled Henry’s 51-goal record with a brace in a 4-1 win over Australia in his nation’s World Cup opener, leaving him one shy of the outright benchmark.

The former Chelsea and Arsenal striker would likely have not started for Deschamps’ side if it had not been for pre-tournament injuries to Karim Benzema and Christopher Nkunku. Earlier, Poland had a huge chance in the first half but France’s midfield did a great job at cutting the feeding line to star striker Robert Lewandowski and the defense withstood the challenge.

The Poles had three chances in the space of five seconds. French keeper Hugo Lloris making his 142nd appearance, now tied with Lilian Thuram as France’s most-capped player made his experience matter when he made a superb quick save to deny Piotr Zielinski.

Bartosz Bereszynski played a neat one-two with Przemyslaw Frankowski, aided by smart off-the-ball movement from Lewandowski, and got round the back on the left. His cutback deflected invitingly towards the onrushing Zielinski, who smashed a shot straight at Hugo Lloris’s left thigh from about 13 yards.

Zielinski’s follow-up was blocked by Hernandez, and then the second follow-up from Kaminski was cleared off the line by Raphael Varane. Zielinski’s was the big chance, and he should have scored. He sweet-spotted it, sure, but it was straight at Lloris.

In the second half, France were definitely the better team and the two goals from Mhappe took the game away from Poland. Giroud, the scorer of the first goal, had a hand in the second goal too, producing the most glorious first touch to kill an up-and-under clearance from Hernandez, then gave the ball to Dembele on the right.

He cut inside and slid the ball across to Mbappe, in space on the other side of the area. Mbappe moved inside, shaped to shoot across the goal and then blistered a rising drive past Szczesny at the near post to notch his fourth goal of the tournament, 2-0.

The Paris Saint-Germain forward added a second to his name with a late effort to make it goal number five of the tournament. Mbappe was in a similar position to the first goal when he received a pass from Marcus Thuram and smashed a curler towards the far top corner with Szczesny getting a touch but couldn’t keep it out, 3-0.

Barcelona striker Lewandowski stroked home a retaken 99th-minute consolation from the penalty spot (3-1) — after Lloris moved off his line too quickly in saving the first effort. The Poles are now winless in their last eight meetings against France.

France will on Saturday meet the winner of the clash between England and Senegal, who play later on Sunday.