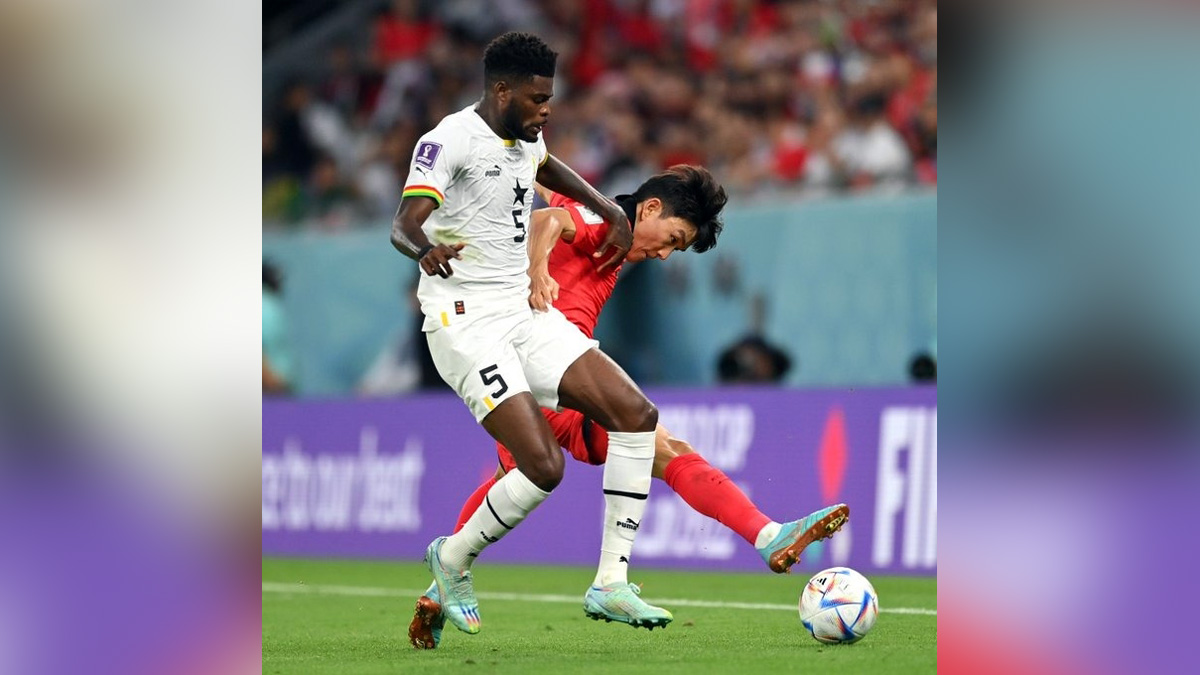 Doha (Qatar) : A brace from Mohammed Kudus helped Ghana register a fighting 3-2 win over South Korea in the Group H match of the FIFA World Cup at the Education City Stadium here on Monday. At the end of half time play, the Koreans were trailing by two goals but came back strongly in the second half to draw level until Kudus scored his second goal of the match and ended the Koreans resistance.

Ghana, having lost their first match against Portugal 3-2, got their first points with Monday’s win in a group where Portugal and Uruguay clash later in the day. South Korea, who drew their opening game with Uruguay and will take on Portugal in the last round match, while Ghana will face Uruguay.

South Korea star Son Heung Min, coached as a young player by Ghana boss Otto Addo at SV Hamburg, again wore a protective mask following a broken eye-socket. But he again struggled and his side now risk going out in the group stage for the third straight World Cup.

A 10-minute spell in the first half by the African nation gave them a 2-0 lead courtesy of goals from Southampton defender Mohammed Salisu and Ajax’s Mohammed Kudus as they brushed aside some early pressure from South Koreans.

Both sides made three changes from their opening game in Qatar, where the Koreans drew 0-0 with Uruguay and Ghana lost 3-2 to Portugal. The opening exchanges were cagey until Salisu netted following Jordan Ayew’s free-kick into the box.

A lengthy video assistant referee check took place as the ball struck older brother Andre Ayew on the hand before dropping for Salisu, but the officials deemed it to be unintentional. The noisy celebrations by Ghana fans at half time were dampened by a South Korean comeback after the break.

Two stunning headers in three minutes from Cho Gue-sung, top-scorer in his domestic league, levelled the game after 61 minutes and threatened to cause another incredible World Cup comeback. But the impressive Kudus, who had deftly headed in Ayew’s cross in the first half, added a final twist when he thumped in a third for Ghana to break South Korea’s hearts in the 68th minute.

South Korea applied some heavy pressure in the final minutes as chances continued to fall South Korea’s way as they searched for another equalizer but, despite 10 minutes of added time, Ghana held on. More drama followed the finish, with South Korea coach Paulo Bento sent off for protesting that the final whistle had been blown when his side were about to have a corner.

Ghana are attempting to make the last 16 for the first time since reaching the quarter-finals in 2010, which was also the last tournament where they tasted World Cup victory. If Uruguay go on and beat Portugal, then anyone can win the group, which will be really interesting.

Till now the group is wide open and it is like that with a lot of other groups left in the competition. Ghana’s Kudus was delighted with the win. “It’s a good feeling. We wanted the three points and we got them. Everyone was absolutely on top of their game today.

They came back to 2-2, we had to come up with more energy and it happened,” he told BBC. “I want to thank all my team-mates, it’s a team game and they all played a part in my performance. The cross in from Jordan (Ayew) and the cut-back from Inaki (Williams).

Big up to everyone because everyone played a part.” “We’re fully confident. We came in with the same mentality, we’ll go in with 100 per cent,” he said about the upcoming Uruguay game.