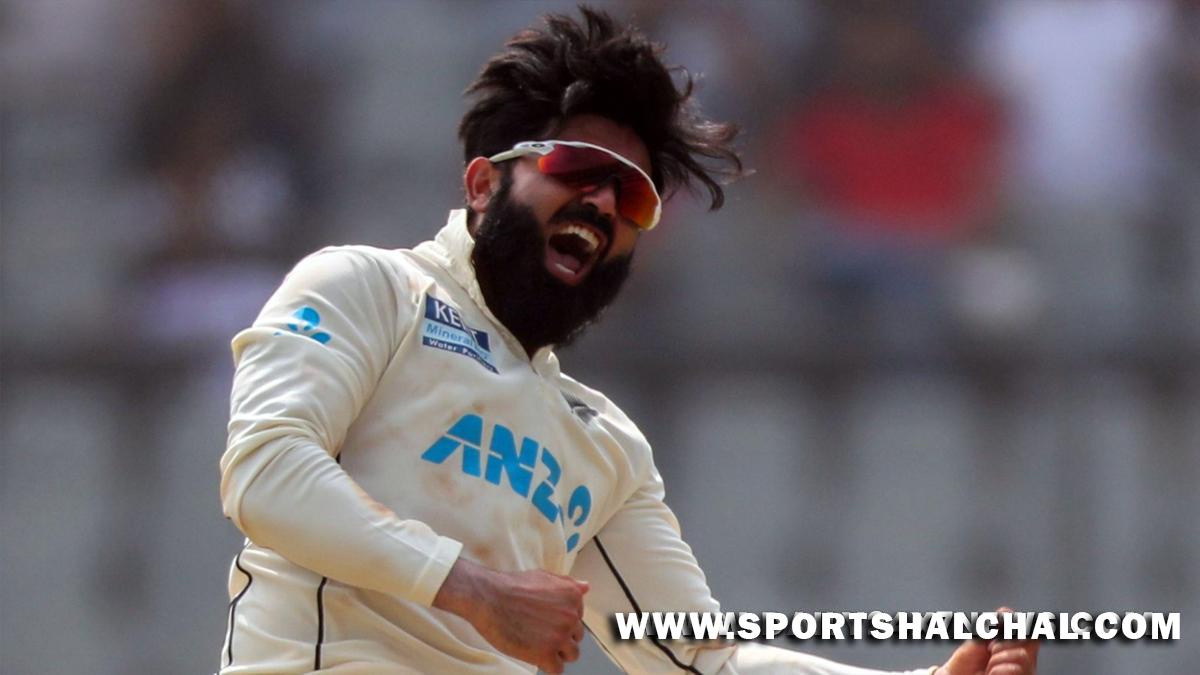 Finishing off with ten was quite an achievement, says Ajaz Patel on his incredible feat

Mumbai : It has been 18 days since New Zealand left-arm spinner Ajaz Patel became only the third bowler after Jim Laker and Anil Kumble to pick ten wickets in an innings in the history of Test cricket.During India’s first innings in the second Test at the Wankhede Stadium, Patel was persistent in his efforts through 47.5 overs to pick all ten wickets at a place where he was born and spent early childhood.On his way to achieving the incredible feat, Patel wasn’t thinking much about joining an exclusive club. “I only started to think about it when I got the ninth wicket (Jayant Yadav). To be honest with you, at the same time, I didn’t really think too much about the club. I just thought how cool it would be to take ten wickets in an innings,” said Patel in an interview with IANS, organised by Amazon Prime Video.”Once it happened, I realised that it’s such a limited number of people who have actually done this. To realise that I was one among there was quite special and humbling. I didn’t really expect it to be unfolding the way it did. Going into the day, I was hopeful that I would pick up six or seven. Finishing off with ten was quite an achievement,” added Patel.Before Mumbai, Patel had played a decisive role in drawing the first Test for New Zealand at Kanpur, albeit with the bat. In the company of all-rounder Rachin Ravindra, Patel had batted 23 balls as the Indian-origin duo denied the hosts a victory by a solitary scalp.

Patel described the situation as ‘tense’ but not thinking about the result helped him.”I was surprisingly relaxed. Rachin had been batting for a while. So, I just asked him for some feedback on what the ball was doing. It was very simple. ‘Try to play as straight as possible’. I had been working a lot in terms of my batting and had been looking to grow in that aspect of my game. I just looked to make sure that I was ready for every ball and then forget about it. I didn’t worry too much about the result or the outcome.””I wasn’t thinking that if I get out, we will lose the game or if I continue, then we will draw the game. It was more about looking at one ball at a time and really focusing on one ball. Quite a tense situation but putting the outcome out of my mind helped me deal with it. Rachin was brilliant at the other end as well. Just positive affirmations in the end and saying ‘that’s well played or maybe try this and try that’. It was a tense situation but really cool to pull through.”Before the two Tests against India, Patel had last played in a Test match against England at Edgbaston in June. The left-arm spinner had concerns about getting some game time with the red ball ahead of the tour. But bowling a lot of overs at his local cricket club in Auckland helped him.”I had plenty of overs under my belt. But the problem was in trying to get high-intensity overs in an environment where it was quite difficult to do so. I used to go down to my local cricket club and used their outdoor nets to go out there and bowl. I would just look to bowl to a stump and in every session, I looked to bowl 15-20 overs. I did that about three to four times a week. That really built the volume. But my main focus was to make sure that my action was good.”

“I knew that when I would get over to India in a competitive environment, all I had to worry about was about starting to think about the game, which I admittedly took a little while to kind of get into the groove of that and really thinking about being out in the middle and out-thinking the batters.”Patel knows that whenever he walks out to play for New Zealand in Tests, there will always be the expectation to do well after his fairytale spell in Mumbai. But he plans to focus on his process, which has yielded him excellent results in the past. “I always go in with the same mindset. It is about making sure I do the preparation well leading up to the game and then in the game, I really follow my processes.””My process in the game is very simple. I tend to focus on one ball at a time and try not to look too far ahead in terms of result. I am pretty comfortable that if I look after my process, the result will take care of itself. It is about controlling that and making sure that I really shorten my game to one ball at a time and allow everything else to kind of unfold.”Out of mandatory quarantine, Patel is happy to be back with his family, who are still delighted by his ten wickets in an innings in Mumbai. “They are all pretty excited and happy. It’s been awesome to see how happy the family has been and how much joy it has brought to everyone and how happy they are just to see the accomplishment.”But the happiest thing for him has been to be with his daughter. “The biggest thing was seeing my daughter and spending time with her. It’s been extra special to spend time with her and in the last month and a half, she has changed a lot. She is nine months old now and every time I come back from a tour, she is slightly different and more quirky. It’s been pretty cool.”Amazon Prime Video debuts in Live cricket streaming on January 1, 2022, after multiple years of being India’s most loved entertainment destination