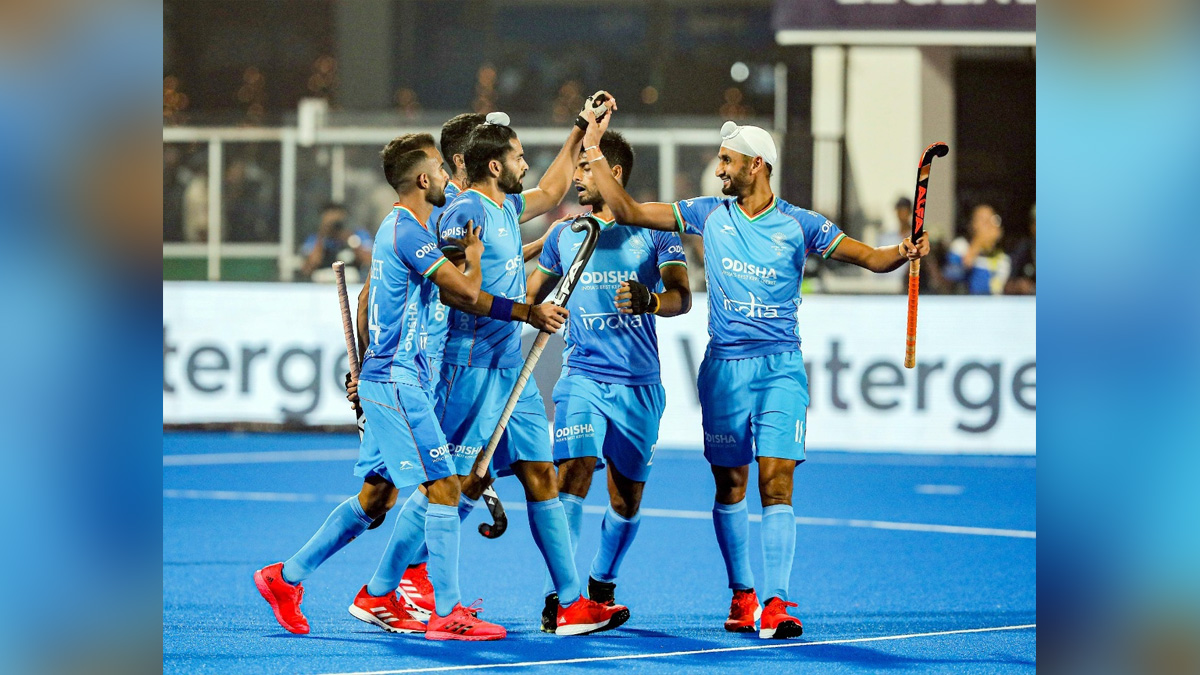 Bhubaneswar : Needing to win by a margin of eight goals to top the group, India huffed and puffed to a narrow 4-2 victory against Wales, finishing second in Pool D and failing to bag a direct spot in the quarterfinals of the FIH Odisha Hockey Men’s Hockey World Cup at the Kalinga Stadium, here on Thursday.

Pool D rivals England, who had a better goal difference, a few hours back thrashed Spain 4-0, thus setting Graham Reid’s team an uphill task of winning by an eight-goal margin or scoring seven goals — six off them field goals, to tie them on seven points and top the standings and secure a direct berth to the quarterfinals.

India, who had defeated Wales 4-1 in their previous encounter in the Commonwealth Games in Birmingham, had beaten Spain 2-0 in their first World Cup match and were then held goalless by England, who had started their campaign with a 5-0 win against Wales.

Akashdeep Singh scored a brace of goals (32nd min, 45th min) while Shamsher Singh (21st min) and Harmanpreet Singh (59th min) contributed one goal each as India fought back from a 2-2 tie in the third quarter to win the match 4-2. Gareth Furlong (42nd min) and Jacob Draper (44th min) pulled two goals back for Wales.

The result meant that England and India ended the preliminary league matches with seven points from two wins and one draw. However, England claimed the top spot in the pool and qualified for the quarterfinals on a better goal difference (9-4).

Spain finished third with three points while Wales have lost all their three matches. Hosts India and Spain will now play the knockout Crossover matches with Harmanpreet Singh’s team taking on New Zealand, which finished third in Pool C.

India enjoyed possession in the first half but could manage to score only one goal after a goalless first quarter as they failed to breach the Wales goal despite making several attacks. They failed to capitalise on their first penalty corner in the 17th minute as Harmanpreet Singh was thwarted by the rusher.

However, the hosts opened their account in the 21st minute when Shamsher Singh pounced on a penalty corner rebound, rushed into the circle and placed a powerful shot to the right of the goalkeeper Toby Reynolds-Cotterill.

India made it 2-0 soon after the half-time breather when Akashdeep scored a fine goal in the 32nd minute, capitalising on a good exchange of passes with Mandeep Singh. India earned four penalty corners soon after but Harmanpreet could not find the goal.

They could not capitalise on a man advantage when Rodri Furlong was shown the green card. Wales came roaring back into the match and earned their first penalty corner off a swift counterattack.

But the Indians defended well. However, they scored their first goal off the second penalty corner when Gareth Furlong deceived PR Sreejesh with a quick change of direction on a powerful flick.

Two minutes later, Wales made it 2-2 when Draper scored off their third penalty corner. Wales had an upper hand during this passage of play and had the Indian defence, which had not conceded any goal in the first two matches, on the ropes.

But India regrouped in the fourth quarter and Akashdeep put them ahead in the 45th minute when he received a swift, short pass from Sukhjeet Singh on the right flank, moved into the circle and unleashed a powerful back-hander that beat the Wales goalkeeper to make it 3-2.

Wales created some pressure in search of the equaliser but a green card to Rupert Shipperley did not help their cause. They did pull out their goalkeeper in an all-out attack in the last five minutes but the Indians sealed victory when they earned their seventh penalty corner and Harmanpreet managed to flick the ball into the goalkeeper-less goal.

Though India had failed to claim the direct spot in the quarterfinals, they should not lose hope as Belgium had gone on to win the 2018 World Cup despite having to work their way back from the Crossover stage.

Graham Reid’s side is hoping to end a 47-year-old drought for a medal at the World Cup. The failure to seal the direct berth into the quarterfinals makes their task a bit more difficult.