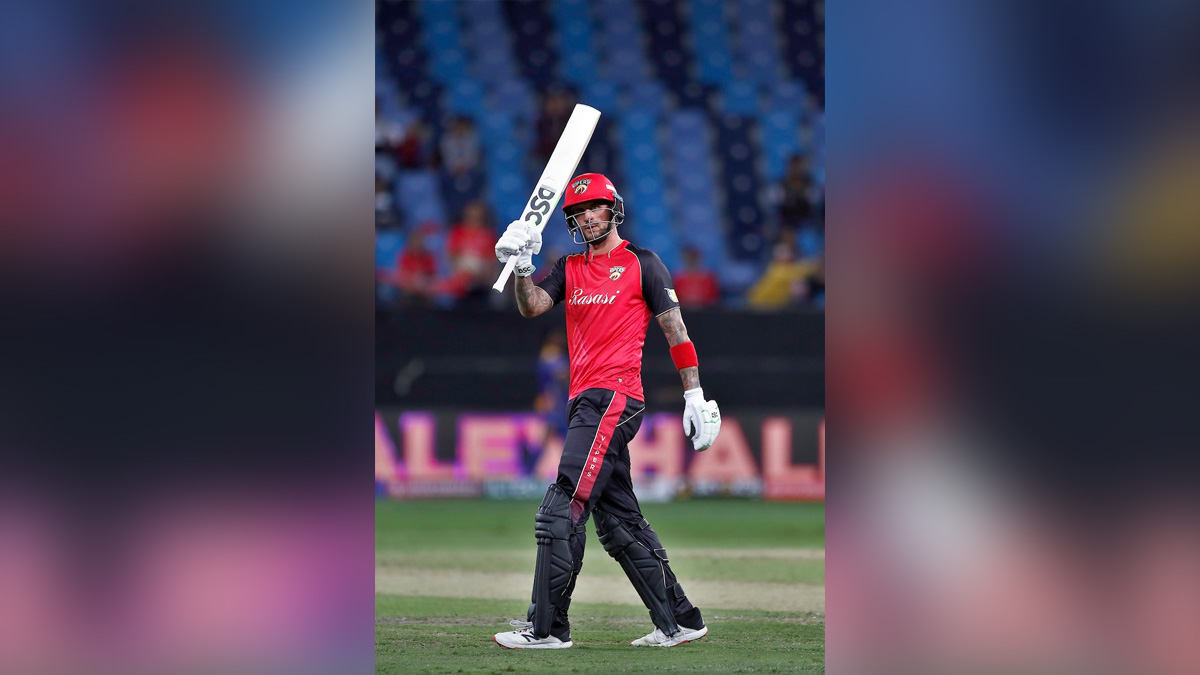 Dubai : Alex Hales cracked an unbeaten 83 runs off 52 balls studded with nine boundaries and three sixes, and along with Sam Billings 49 runs off 38 balls, with four boundaries and a six, led Desert Vipers to an emphatic seven-wicket victory over Sharjah Warriors in the fourth match of the ILT20 at the Dubai International Stadium, here on Sunday.

The England pair through their array of shots put on a 128 runs partnership in 14 overs to win the match with 20 balls to spare. Desert Vipers displayed their bowling and batting strength to sting their opponents hard in their opening match to crush Sharjah Warriors for their second successive defeat.

Billings fell one short of his half-century when Desert Vipers needed just three runs to win. Earlier, Desert Vipers, after winning the toss, put Sharjah Warriors into bat and restricted them to 145 for 5 in 20 overs.

The first over of the match saw a top-edge six over the wicketkeeper from Sharjah’s opener Rahmanullah Gurbaz off the fifth ball from Sheldon Cottrell. In the third over, opener Evin Lewis, going for a pull, top-edged into the hands of Tymal Mills at short fine leg off Cottrell for a duck.

Gurbaz, who had hit Cottrell for his second six, fell to Gus Atkinson in the fourth over. He tried to hit to mid-wicket but mistimed it and landed up yielding a high catch to wicketkeeper Sam Billings for 22.

Atkinson would have gotten the wicket of Dawid Malan too in the same over if Sherfane Rutherford had not dropped an easy catch at the backward point. Tom-Kohler Cadmore hit Tom Curran past backward square for a boundary but fell getting caught by UAE’s Rohan Mustafa at third man for 6.

Three down for 38 in 5.3 overs, skipper Moeen Ali joined Malan and they hit one boundary each in the eighth over from Atkinson to take their team’s total past the 50-run mark.

At the score of 66, Ali, on 18, lifted Tymal Mills to Tom Curran who took a brilliant running catch. Losing four wickets at the halfway mark, Sharjah struggled for runs. Malan on 18, flicked into the hands of Alex Hales at wide long-on.

When half the side was back in the dug-out for 68, Mohammad Nabi joined Joe Denly. But given the tight bowling by Desert Vipers, they could keep the scoreboard moving only through singles and twos.

From 91 for 5, Sharjah added 54 runs in the last five overs. Denly remained unbeaten on 36 and Mohammad Nabi unconquered on 34. The pair put on an unbeaten 77 runs in nine overs to post a fighting total of 146 for 5 in 20 overs.

Desert Vipers began their chase with UAE’s Rohan Mustafa and Hales opening the innings. Mustafa fell to the last ball of the first over from Moeen Ali, caught at deep square leg by Woakes for 8 after he had hit two consecutive boundaries.

Skipper Colin Munro joined Hales but got out for a duck, pulling Woakes into the hands of Denly at deep square leg. From the sixth over, Hales began to unleash his aggressive shots. He hit Woakes for a boundary and two sixes to take 16 runs off the final over of the Power-play.

Sam Billings played second fiddle and at the halfway mark, Desert Vipers were well placed at 81 for 2. Needing to score only 65 off the last ten overs, Hales reached his half-century in 39 balls.

Billings too began to open out and the pair put on a 100 runs partnership in 12.1 overs and took a firm grip on the match. “It was a great win for us. We bowled outstandingly. A lot of credit has to go to the bowlers.

There’s a great atmosphere within the team and it’s a great start for us. It’s always nice to start on a winning note and it’s great for the side’s confidence,” said Hales at the post-match press conference.