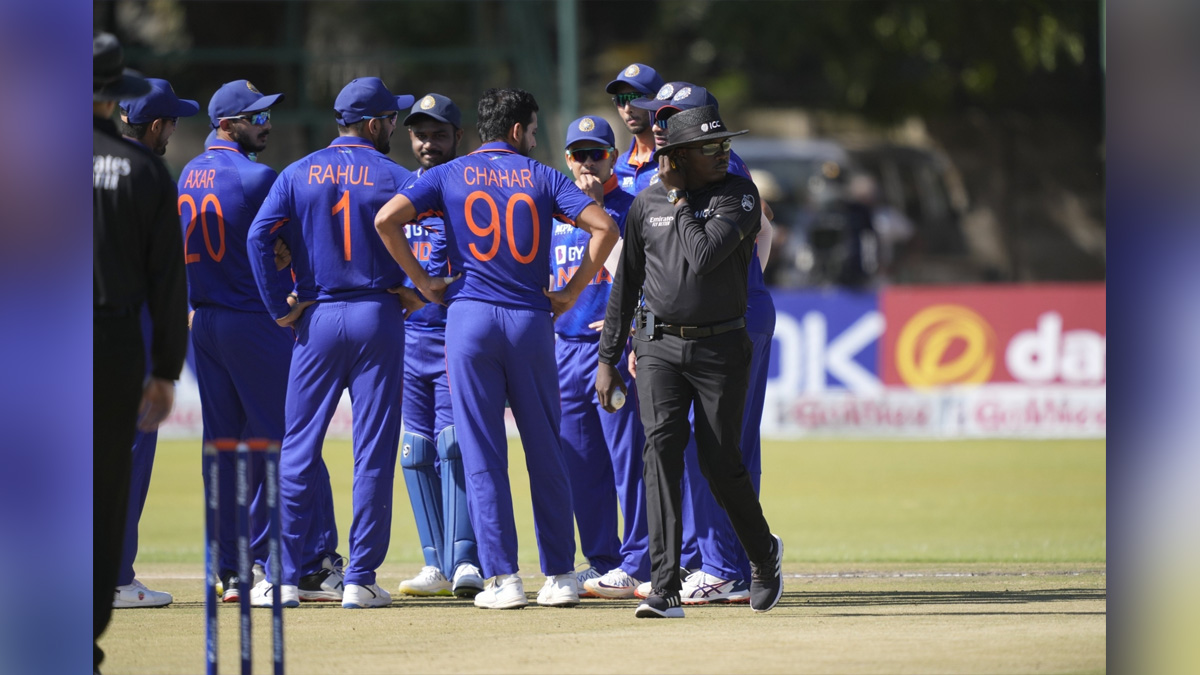 Harare : Deepak Chahar’s opening burst of 3-27, followed by three-wicket hauls from Axar Patel and Prasidh Krishna, as well as unbeaten fifties by vice-captain Shikhar Dhawan and Shubman Gill helped India to a resounding ten-wicket victory against Zimbabwe in their ODI series opener at the Harare Sports Club on Thursday.

The win is also India’s third 10-wicket victory over Zimbabwe in ODIs and also their 13th consecutive triumph over the hosts’ in 50-over cricket.

A major part of the Dhawan-Gill stand was how Dhawan, the early aggressor, took a backseat for some time when Gill found his groove after a watchful beginning in the innings.

Dhawan began the chase of 190 with back-to-back boundaries off Richard Ngarava a tickle through fine leg was followed by slicing over backward point.

He and Shubman Gill focused on strike rotation with some lbw shouts in between from the Zimbabwe bowlers.Dhawan broke the rut of boundaries by cutting past square gully on some width provided by Ngarava.

As Gill continued to take time, Dhawan quickly pulled off Sean Williams and also had a life when Brad Evans dropped the catch at square leg.Gill, now 24 balls without a boundary, got back-to-back boundaries in as many balls off Evans.

A cut on a short delivery through square region was followed by an edge through the vacant slip region. He ended the 14th over by punching through cover point, as 16 runs came off it.

Dhawan got his fifty when he punched to long-on and on the very next ball, he lofted inside-out over extra cover to bring up India’s hundred and complete a century of his opening stand with Gill.

Helped by some extras and loose bowling from Zimbabwe’s bowlers, Dhawan and Gill continued to be undeterred in the chase. Gill then slammed successive fours off Ryan Burl a drive through extra cover was followed by smash through cover-point to reach his third ODI fifty in the last four matches in 52 balls.

Gill shifted his gears seamlessly by hitting a four and a six over the leg-side boundary off Madhevere’s successive deliveries to bring up India’s 150.

Dhawan and Gill knocked off the rest of the needed runs with immaculate ease, with the latter’s short-arm pull being the standout, as India sealed the game with 115 balls to spare.

Earlier, a fantastic counter-attacking act from Evans (33) and Ngarava (34) sharing a record 70-run stand for the ninth wicket, their highest-ever against India, helped Zimbabwe get close to reaching 200.

While Chahar took his time to settle in, Siraj was looking sharp despite some extras leaked.The short ball did the trick for Chahar as he cramped Innocent Kaia for a room on the pull and thick-edge was grabbed behind.

He returned in his next over to have Tadiwanashe Marumani poking at a short ball and nicked behind.Siraj then shortened his length and got the ball to move away late from Williams, who poked tentatively to give a simple catch to the first slip.

Five balls later, Chahar had his third scalp as his late swing on a full ball trapped Wesley Madhevere lbw. Zimbabwe had some relief when captain Regis Chakabva hit three boundaries in two overs off Chahar and Siraj.

Sikandar Raza began with a lovely drive off Chahar and survived an lbw appeal on the very next ball. But his stay was cut short by Krishna, who had beaten him a couple of times before. On a full ball, Krishna got Raza forward and forced him to edge straight to the first slip.

Ryan Burl got going with two boundaries but miscued a pull on Krishna’s short ball straight to deep square leg.Chakabva continued to hold the fort, flicking Krishna for a boundary while Luke Jongwe took Zimbabwe’s total past 100-run mark in the 26th over with back-to-back boundaries a cut through outside off was followed by a gorgeous drive past mid-on.

Patel applied brakes on Zimbabwe’s innings by castling Chakabva with a slider and then trapped Jongwe lbw in his next over.From there, the fightback act from Evans and Ngarava began. The duo rotated the strike and scored the occasional boundaries.

Evans then smashed Kuldeep Yadav over mid-wicket to bring up the first six of the innings. Ngarava feasted on Krishna’s outside off deliveries to send them to the boundary rope before dispatching Patel for a huge six over wide long-on.

As the crowd began to cheer loudly for the home batters, Krishna brought the 70-run stand to a close with a yorker from round the wicket rattling Ngarava’s off-stump. Axar ended the innings by having Victor Nyauchi edging to first slip to end Zimbabwe’s innings at a below-par 189.

Even in a room full of people who love me, I’ve felt alone : Virat Kohli