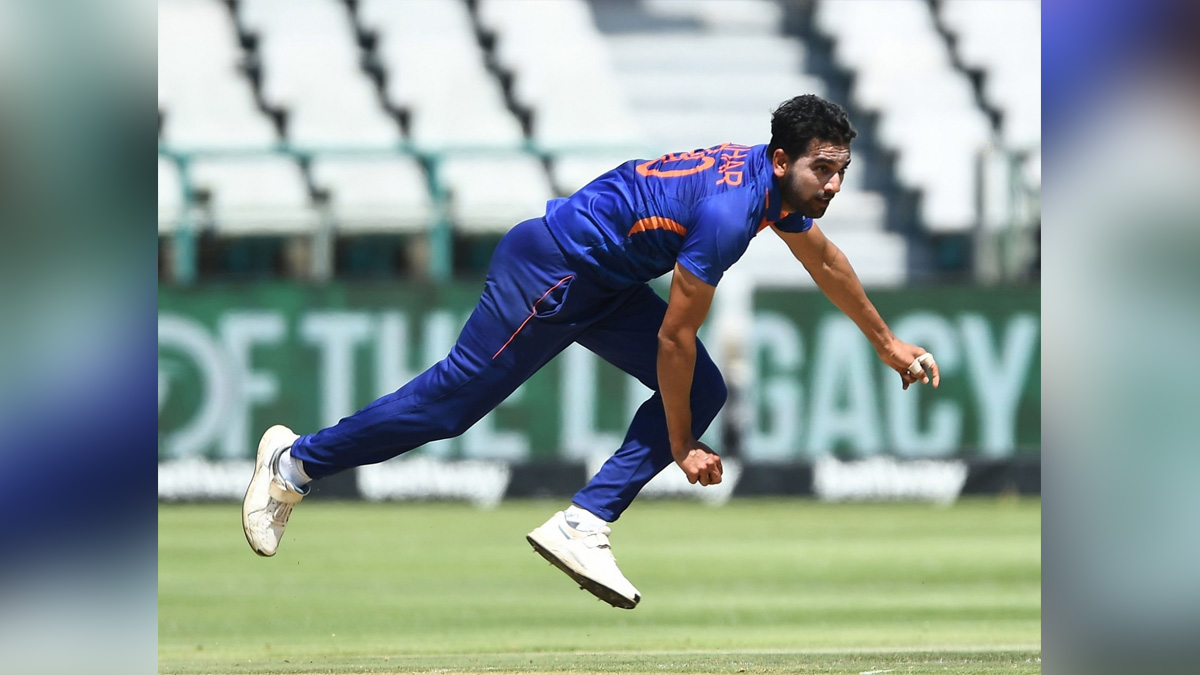 IND v ZIM, 1st ODI: Was nervous when playing international game after six and a half months : Deepak Chahar

Harare : Playing in his first competitive game in nearly seven months, Deepak Chahar was understandably taking time to find his rhythm. But he was quick in getting his lengths right and sowing seeds of doubt in the minds of the opening batters.

“The landing area was a little hard and my nails were not going in and were slipping. When you are playing an international game after six and a half months, you are always nervous.

Before coming here I played four-five practice games,” said Chahar after picking the Player of the Match award in India’s 10-wicket win.

Majorly pitching in good length area, the short ball did the trick for Chahar as he cramped Innocent Kaia for room on the pull and thick-edge was grabbed by wicketkeeper Sanju Samson on the second attempt.

He returned in his next over to have Tadiwanashe Marumani poking at a short ball and nicked behind to Samson. Post power-play, Chahar had his third scalp as his late swing on a full ball trapped Wesley Madhevere lbw while going for the flick.

In seven uninterrupted overs, Chahar exhibited signs of him slowly getting back to his best, which is good news for India ahead of assignments like the Asia Cup, where he is in the reserves and the Men’s T20 World Cup.

“But playing for the country, you wanted to do well and the mind and body, as well as mind, was not working together. That ball I wanted to bowl a bouncer and the spikes didn’t go through and I slipped. But it got better after that.

I’m fine and the body is fine as well,” added Chahar.In India’s 10-wicket victory to take a 1-0 lead in the three-match series, vice-captain Shikhar Dhawan and Shubman Gill slammed unbeaten fifties to chase down 190 in 30.5 overs.

A major part of the Dhawan-Gill stand was how Dhawan, the early aggressor, took a backseat for some time to be unbeaten at 81 when Gill found his groove after a watchful beginning in the innings to be unconquered at 82.

“I am enjoying batting with the youngster (Gill) and I feel like a youngster too. I enjoyed the consistency from West Indies. I knew that once I was set, I would go after the bowlers. I wanted to rotate the strike as well and then was to accelerate.

My rhythm with Gill has settled nicely. The way he bats and times the ball is lovely to watch. He has shown the consistency in converting fifties into bigger fifties,” stated Dhawan.

Dhawan also had two good catches as a slip fielder and was happy with Chahar’s impressive return to the international fold.”I enjoy (catching at slip) and it has become easy with experience.

Our bowling unit did well and it was nice to see Deepak Chahar come back from injury and pick up three wickets. I am sure he would be feeling confident as well.”