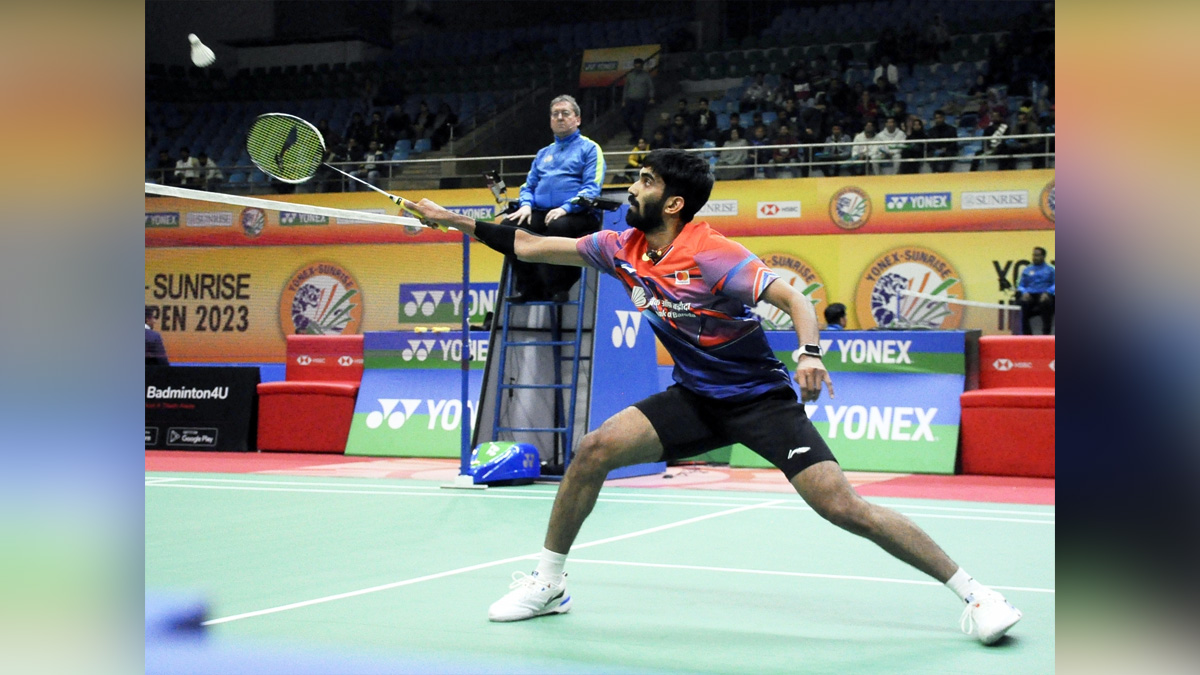 New Delhi : Former World Championships medallist Kidambi Srikanth fought hard but could not stop the juggernaut of Olympic and world champion Viktor Axelsen in the opening round of the India Open 2023 at the the Indira Gandhi Indoor Stadium, here on Wednesday.

The World No. 14 Indian relied on his attacking instinct and played his trademark jump smashes to gain points. But Axelsen managed to stand strong when under pressure to win the match 21-14, 21-19 to register his seventh straight victory over his Indian opponent.

In the day’s other matches, second seed Lee Zii Jia and Denmark’s Anders Antonsen were taken to the distance by their relatively unknown opponents while a visibly tired Kodai Naraoka of Japan fizzled out in three games against third seed Loh Kean Yew of Singapore.

Meanwhile, other Indians in action Aakarshi Kashyap and Malvika Bansod also ended on the losing side against their higher ranked opponents. While Kashyap suffered a 15-21, 12-21 loss against the former champion Beiwen Zhang of USA, Malvika Bansod lost to defending champion Busanan Ongbamrungphan of Thailand 17-21, 12-21.

World No. 1 Axelsen was the favourite going into the first round encounter, having won 10 out of the 14 tournaments he has played in the last 12 months including the Malaysian Open last week and he showed his composure and temperament in the opening game by keeping the shuttle in play and waiting for his opponent’s mistakes to draw first blood.

Srikanth, however, wasn’t willing to give up without a fight and when he opened up a 14-5 lead in the second game it looked like the Indian could win his first game against the Danish on the 14th attempt.

But Axelsen remained unfazed by the score line and stuck to his game plan, only changing the speed of the rallies to put pressure on his opponent. He also dug deep into his defence at 14-8 to win a long rally and bagged seven straight points to bounce back in the game.

“I still can’t believe I managed to win that match. I didn’t feel at all good in the second game, Srikanth stepped up and suddenly he locked me in. Yeah, really surprising. However, I am really happy that I managed to win in straight games.

So, it’s not easy to come from a hot humid country (Malaysia) to a rather cold New Delhi. So I am trying to adapt in the best way possible,” Axelsen said after the match. Things were neck and neck thereafter and Axelsen delivered the knockout punch with a cross dribble on the net while following up on a cross court smash.

He will now face China’s Shi Yu Qi in the second round of the tournament, part of the BWF World Tour Super 750 event. “Overall I think I played well but just couldn’t really finish a few points.

But yeah, there are a lot of positives to take from it. But I need to work a lot,” Srikanth said. Earlier, the other marquee clash of the day between former world champion Loh and the up and coming Naraoka, failed to live up to expectations as the Japanese, who last week reached the Malaysia Open final, clearly struggled with his stamina after winning the first game and lost 18-21, 21-9, 21-7.

There were no surprises in the women’s singles section with top seed Akane Yamaguchi of Japan, second seed An Se-Young of South Korea and 4th seed He Bingjiao of China advancing to the second round without losing a game.

In the men’s doubles category, crown favourites Hendra Setiawan and Mohammad Ahsan of Indonesia were knocked out in the opening round. The fourth seeded combination saved two match points in the decider but could not avoid a 21-14, 18-21, 23-21 loss against China’s Wei Keng Liang and Chang Wang in just under an hour.