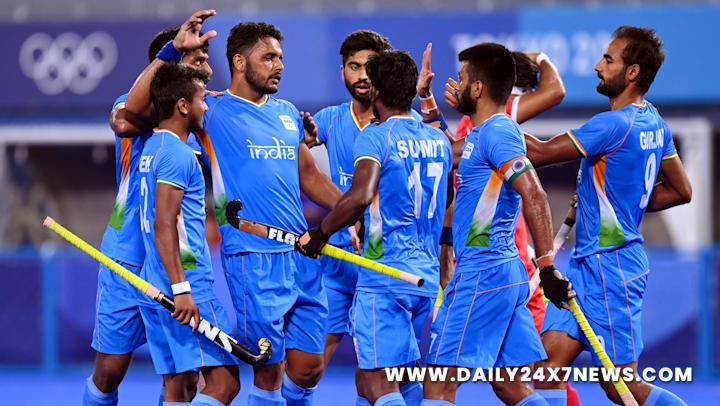 Tokyo : Displaying exuberant hockey game’s skills, Lovely Professional University (LPU) students have empowered Indian Hockey to qualify for Semis of Olympic games after 49 years. Strengthening the men’s hockey team and defeating Great Britain in quarterfinal by score of 3-1 goals, they have enabled Indian team now to take on World Champions Belgium in one of the Semi-finals to be played on 3rd August at 7am IST.Under the illustrious captaincy of LPU MBA student Manpreet Singh, LPU’s BA Student Dilpreet Singh scored the first field goal added with 2 others by his teammates, Gurjant and Hardik. The lone goal for Great Britain was scored by Sam Ward in the 45th minute.LPU Chancellor Mr Ashok Mittal has accorded best wishes to the Indian team for scintillating wins in both semi and final matches. Mr Mittal anticipates that India will gain a ninth Olympic gold medal in hockey to prove the saying “History repeats itself” true.Illustrative, seven LPU students in Indian Men’s Hockey Team are its Captain Manpreet Singh (MBA), Rupinderpal Singh (MBA), Harmanpreet Singh (MBA), Mandeep Singh (BA), Shamsher Singh (MBA), Dilpreet Singh (BA) and Varun Kumar (MBA). On winning over Belgium, India will face either Australia or Germany in the final match for Gold.Belgium has defeated Spain 3-1 in another quarterfinal. The other semi-final of the men’s hockey competition will be played between Australia and Germany. The last time India participated in the semi-finals of the Olympics was in 1972 Munich Games, where they lost 0-2 to their arch-rivals. Even though the last of India’s eight Olympic gold medals came way back in the 1980 Moscow Games, there were no semi-finals in that edition as only six teams were participating.