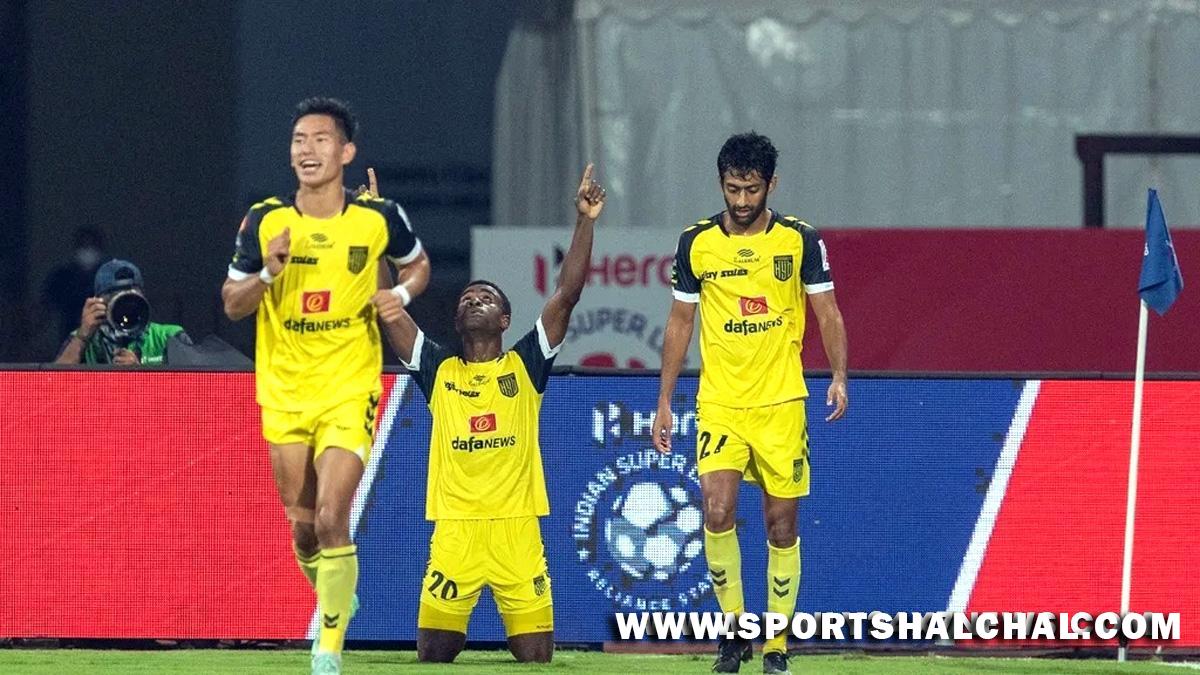 Bambolim (Goa): Hyderabad FC thrashed NorthEast United FC 5-1 in the Indian Super League 2021-22 match at the Athletic Stadium here on Monday. With this emphatic win, Hyderabad FC climbed to the second position on the points table.Chinglensana Singh (12′) opened the scoring while a brace from Bartholomew Ogbeche (27′, 78′) sunk one of his former clubs. Substitutes Aniket Jadhav (90′) and Javier Siverio (90+3′) joined the party late. Laldanmawia Ralte (43′), a Hyderabad FC player himself until this summer, scored for the Highlanders.Hyderabad FC, with 10 points, trail leaders Mumbai City by just two points. NorthEast faced their fourth defeat in six games, leaving them 10th on the table with just four points.A fit-again Edu Garcia’s inclusion in the starting XI for the first time since the first game week proved to be an inspired move. A freekick in the 10th minute sailed over the bar but another set-piece moments later did the trick.Chinglensana Singh scored his first ISL goal courtesy of Garcia’s freekick that hit the upright initially. Goalkeeper Subhasish Roy Chowdhury was caught ball-watching and defenders out of position when the Manipur-born defender slotted home from the rebound.

With the deadlock broken, Hyderabad egged on for a second. An unmarked Ogbeche missed the easiest of chances after build-up play from the right flank was fed off by an Ashis Rai cross.The Nigerian made amends immediately. Garcia was in the thick of things again as he lobbed the ball into space for Ogbeche who ran past the defenders to collect it and smash the ball into the net with his left foot.Danmawia had no qualms in punishing his former side as he turned fox in the box. It was Tondonba’s long throw-in that resulted in a goal-mouth melee. Suhair’s shot was blocked but not cleared and NorthEast had the Mizo winger half the deficit.NorthEast shortly looked enterprising after the change of ends. Substitute Lalkhawpuimawia attempted an ambitious bicycle kick and Danmawia’s header from Joe Zoherliana’s cross went over.Marquez made a host of changes bringing in fresh legs but it was an almost solo effort from Ogbeche to seal the third as he left Santana for dead, swiveled, and blazed a shot from range that the keeper had no chance to deal with it.Siverio first assisted and then scored in the dying embers of the game as Aniket Jadhav, another introduction from the bench, too got his first goal for the club.