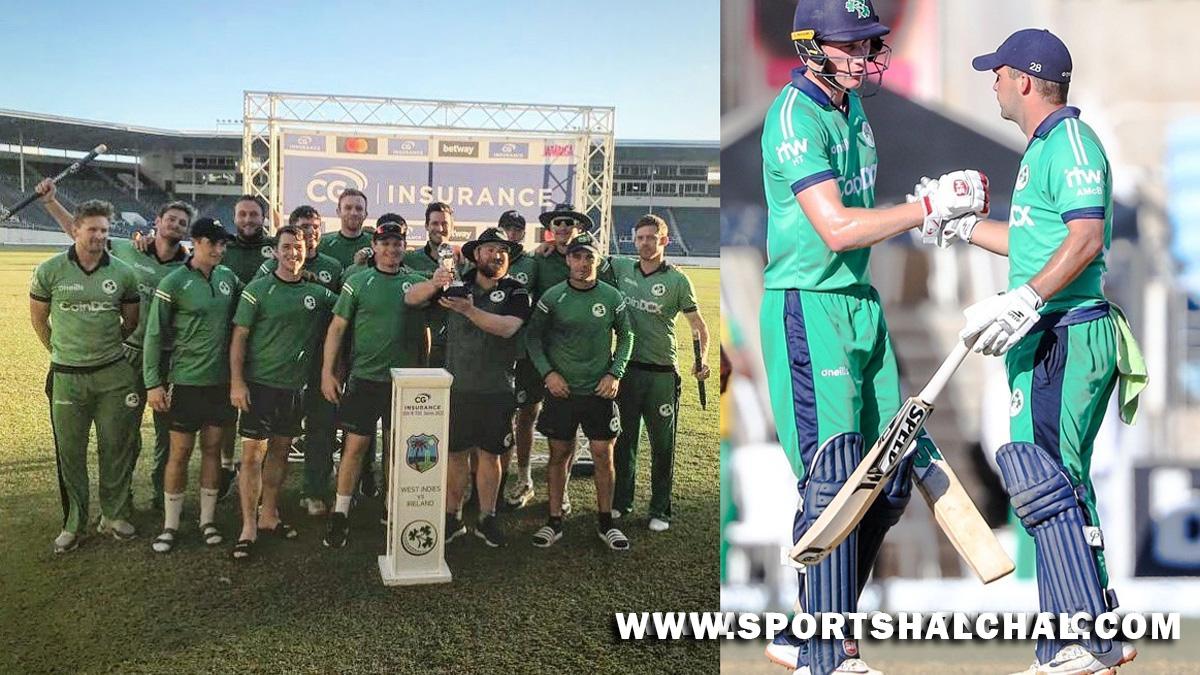 Kingston (Jamaica) : Half centuries from Andy McBrine and Harry Tector helped Ireland defeat West Indies in a nail-biting third and final One-day International by two wickets to clinch the series 2-1 at the Sabina Park here on Monday (IST).Set a modest target of 213 to win in 50 overs, the tourists survived a dramatic late batting collapse after McBrine (59) and Tector (52) had patiently scored their half-tons, to secure a famous series win.Ireland lost four late wickets after being 190/4 and seemingly cruising to their required target. But the visitors held their nerve to complete one of the highest-profile series wins in the history of Irish cricket and collect 10 further ICC Men’s Cricket World Cup Super League points to go to the third spot in the standings.Earlier the West Indies had suffered a collapse of their own, losing six wickets for just 29 runs to leave their first innings in tatters after Shai Hope’s early half-century, with McBrine taking 4/28.And while all-rounder Jason Holder inspired the tail to wag to lift the West Indies to 212 all out from 44.4 overs, it wasn’t a high enough target to deny Ireland, with McBrine and Tector hitting half-centuries in what proved to be a nervy second innings.

Ireland’s five-wicket win in the second ODI on January 13 had set up a winner-takes-all series finale. And it was the West Indies who got off to a flier in the deciding ODI at Sabina Park, as Shai Hope brought up the fastest half-century of his ODI career, reaching the landmark off just 37 balls.But Hope’s departure in the 11th over sparked a collapse as the home side lost three wickets for four runs to heap the pressure on the middle order, with Craig Young and McBrine doing the damage with the ball.
And when McBrine struck for the third time to have captain Kieron Pollard caught in the slips for 19, it looked like the West Indies were in danger of posting an uncompetitive total.A rear-guard effort, inspired by Holder (44), Akeal Hosein (23) and Odean Smith (20 not out) helped West Indies past 200. But Young returned to the attack to pick up his third wicket of the game to bring the innings to a close, finishing with figures of 3/43.A famous series win was within reach for Ireland, but their run-chase got off to the worst possible start when William Porterfield fell to the very first ball of the innings, caught on the boundary off Alzarri Joseph.McBrine and Paul Stirling steadied the ship, with the latter taking the attack to the West Indies and ensuring that Ireland would always be ahead of the required rate with his 44 off 38 balls, featuring five fours and a six.

McBrine and Tector added a further 79 runs for the third wicket, with McBrine continuing his outstanding contribution with a 59 off 100 balls before falling to Odean Smith to leave Ireland 152/3.The Irish seemed to be cruising to a comfortable win, but the wickets continued to fall at regular intervals, and when Tector was trapped LBW to Roston Chase for 52 his third half-century of the series — West Indies saw a ray of hope that they may be able to pull off a turnaround.A huge heave saw Gareth Delany caught for a breezy 10 from five, and a catch in the slips by Holder accounted for George Dockrell to leave Ireland eight-down with five runs still required to win.
But Ireland’s tailenders Mark Adair and Craig Young held their nerve to get the team across the line, with Young’s delicate cut for four sealing the two-wicket win.
Brief scores: West Indies 212 in 44.4 overs (Shai Hope 53, Jason Holder 44; Craig Young 3/43, Andy McBrine 4/28) lost to Ireland 214/8 in 44.5 overs (Paul Stirling 44, Andy McBrine 59, Harry Tector 52; Akeal Hosein 3/59, Roston Chase 3/44) by two wickets.