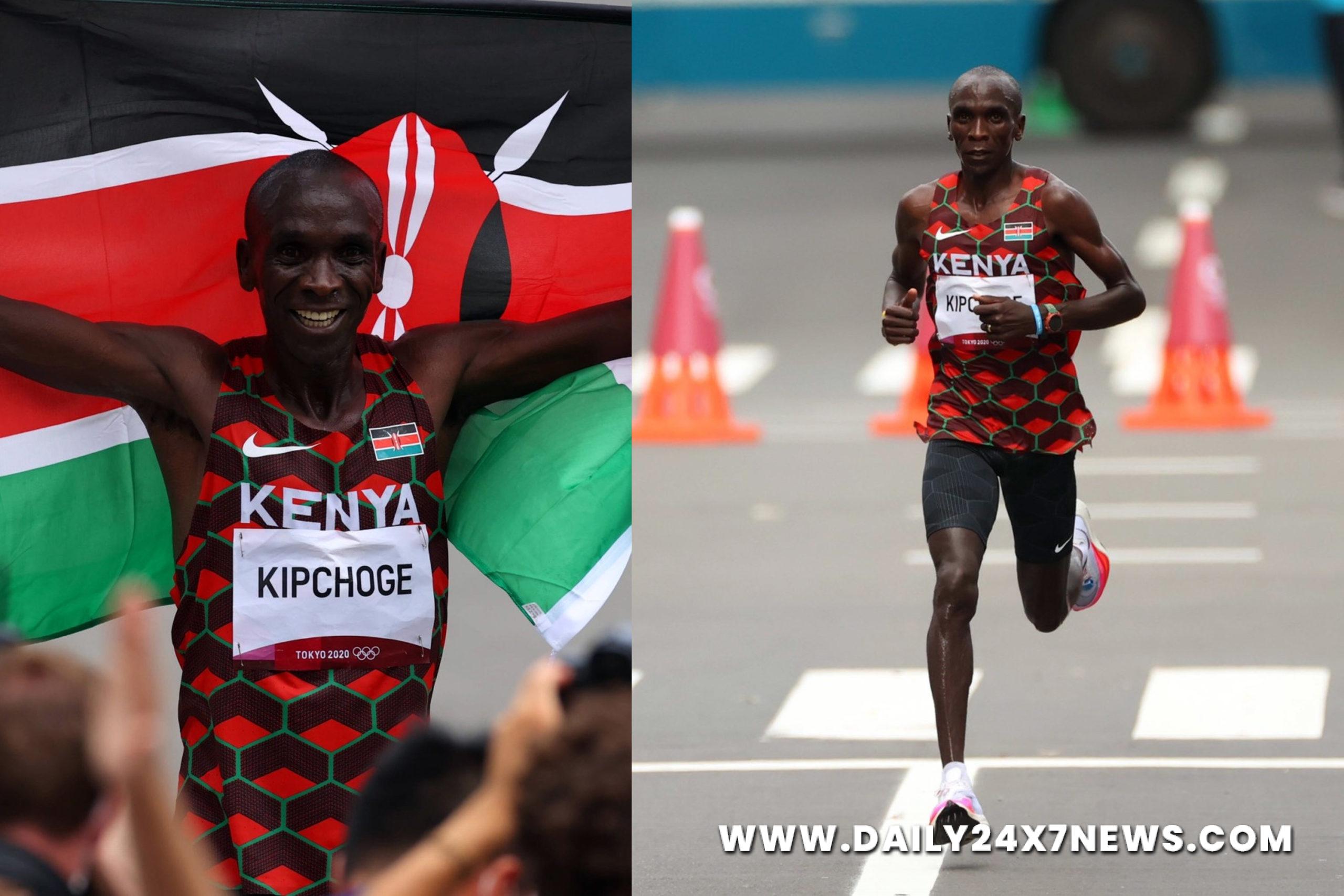 Tokyo : Kenya’s Eliud Kipchoge retained the Olympic men’s marathon title, crossing the finish line in the gruelling event held at the in Sapporo Odori Park in a time of two hours eight minutes and 38 seconds.Kipchoge, running in his fourth Olympics, clocked a time faster than his 2016 Rio Olympic Games gold-winning performance.”It means a lot for me, especially at this time,” said Kipchoge after winning his second Olympic gold.”It was really hard last year, it (Olympic Games Tokyo 2020) was postponed. I am happy for the local organising committee who made this race happen,” the Kenyan long-distance running stalwart was quoted as saying by the Olympic channel.”It is a sign that shows the world we are heading in the right direction — we are on the right transition to a normal life. I can say congratulations to them that they made this Olympics happen.”Kipchoge, winner of the bronze at the 2004 Athens Olympics and silver at the 2008 Beijing Games in 5000m, already had a full set of medals coming into the energy-sapping race in Tokyo as he had won the 2016 Rio Olympic marathon gold.But the latest addition to his collection is Kenya’s fifth medal in men’s Olympic marathon since the Games in 2008 Beijing.Kipchoge now joins a select club of runners who have successfully defended the Olympic marathon title. The others are Ethiopia’s Abebe Bikila (1960 and 1964) and East Germany’s Waldemar Cierpinski (1976 and 1980).”I think I have fulfilled the legacy by winning the marathon for the second time, back-to-back,” Kipchoge added. “I hope now to help inspire the next generation.” Kipchoge was one minute and 20 seconds ahead of the next closest finisher.

The Kenyan’s winning margin is the biggest ever in an Olympics marathon since 1972 when Frank Shorter of the USA defeated Belgium’s Karel Lismont by two minutes and 12 seconds in Munich.The race for the silver and bronze here on Sunday came down to a sprint finish.Abdi Nageeye of the Netherlands outsprinted his training partner, Bashir Abdi of Belgium and Kenya’s Lawrence Cherono to claim the silver in a time of 2:09:58.Bashir, the winner of the Boston and Chicago marathons in 2019, finished two seconds later, in 2:10:00, for the bronze. Cherono was a further two seconds adrift in fourth.”I love it. I don’t want to mention names but many people they had doubts,” said Nageeye on what winning silver means to him. “They never believed in me. I always believed in myself.””I was a nomad, I packed my bags and trained in France, America, Ethiopia, Kenya.”People think I’m doing too many things (with training), but I just kept believing in myself.”To stand on the podium with (former training partner) Eliud Kipchoge, the greatest of all time – we are still good friends. It is amazing.”A total of 105 athletes started the event in the hot and humid Sapporo, but several top runners and pre-event favourites failed to finish the because of the hot and humid conditions.Uganda’s Stephen Kiprotich, the London 2012 champion and Ethiopia’s Shura Kitata, the 2020 London Marathon champion, were just two of the runners that struggled in the humidity and withdrew in the first 15 kilometres.However, Kipchoge, the world record holder, looked comfortable throughout. It was a pleasing sight to see the Kenyan icon handing water bottles and ice to the rivals he passed in the early stages of the race.Having suffered a rare loss in the London Marathon in 2020, Kipchoge was clearly a man on a mission and seemingly back to his dominant best. The Kenyan made his move at the 25km mark and added pace to stretch the lead.As he approached the line, Kipchoge continued to make the race look easy following a masterful display of his abilities.