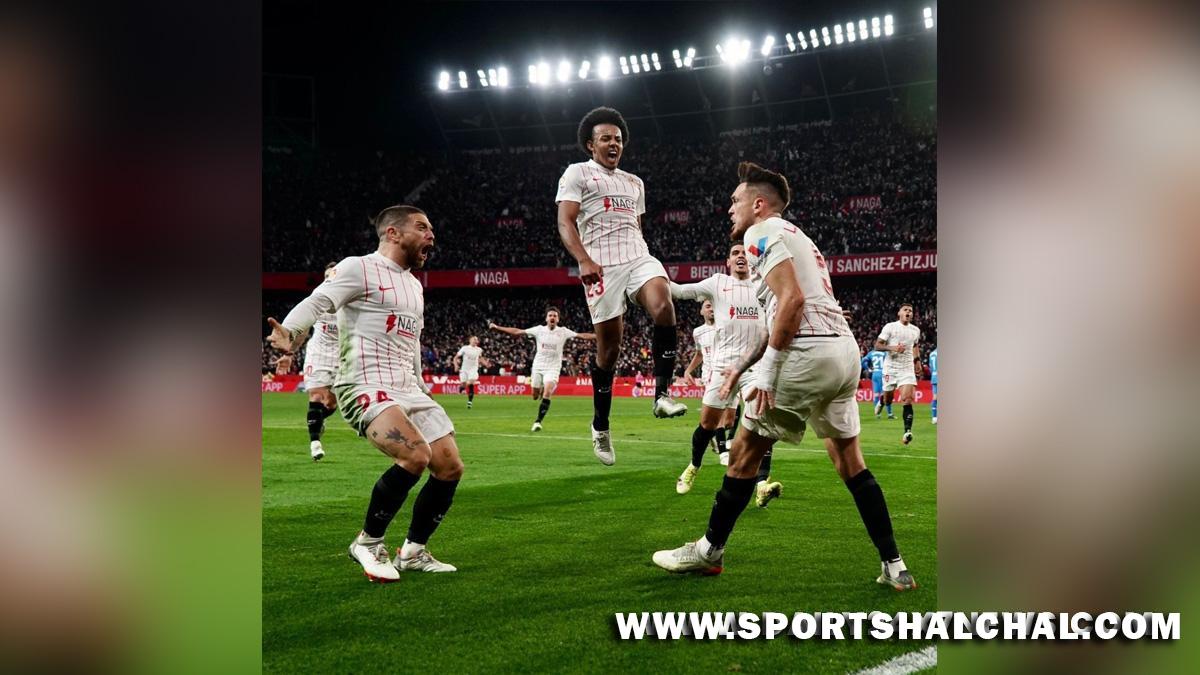 Madrid : Sevilla kept themselves in the race for the La Liga title thanks to a late goal from Lucas Ocampos which gave them a 2-1 win at home to Atletico Madrid.The win on Saturday night leaves Sevilla five points behind league leaders Real Madrid, who play away to Cadiz later on Sunday.Sevilla took the lead through a powerful shot from Ivan Rakitic and were in control until Felipe headed home from a corner 12 minutes before halftime.Atletico lost Manuel Llorente through another muscle injury before the break, but despite losing a key player, Atletico improved and looked as if they could take at least a point until Ocampos scored from close range with just three minutes to go.Barca coach Xavi Hernandez again showed his faith in youth, but handing a debut to B-team midfielder Ferran Jutgla, while keeping Gavi and Abde Ezzalzouli in his starting 11, Xinhua reports. That faith was rewarded when Ferran headed in the opening goal from a corner in the 16th minute, before Gavi worked space to fire home his first goal for the club three minutes later as their side totally dominated the first half.

Elche fought back in the second half, as Barca suffered another dip in intensity and two goals from substitutes Tete Moriente and Pere Milla in the 62nd and 63rd minutes levelled the score before Nico Gonzalez (another teenager) netted a vital winner for Xavi Hernandez’s side.Rayo Vallecano remain in the battle for Europe and moved above Atletico into fourth place, after their steamrolling 2-0 win at home to Alaves thanks to first half goals from Sergi Guardiola and Catena.The team from the south of Madrid have won eight and drawn two of their last home games, while the defeat ends a miserable week for Alaves, who were knocked out of the Copa del Rey by lower league Linares on Tuesday (December 14).Villarreal’s season seems to be recovering, while Real Sociedad’s league campaign continues to fall apart as they suffered their fourth defeat in five matches in the Anoeta Stadium, going down 3-1 to former player, Unai Emery’s side.The game was level at the break after Gerard Moreno had levelled for Villarreal after Alexander Isak’s opener for Real Sociedad. However, everything changed when Mikel Oyarzabal was sent off for a bad challenge on Yeremy Pino.Moreno headed Villarreal ahead from a corner in the 68th minute and Samuel Chukwueze rounded off a good day for the visitors with a goal on the break in the sixth minute of injury time.