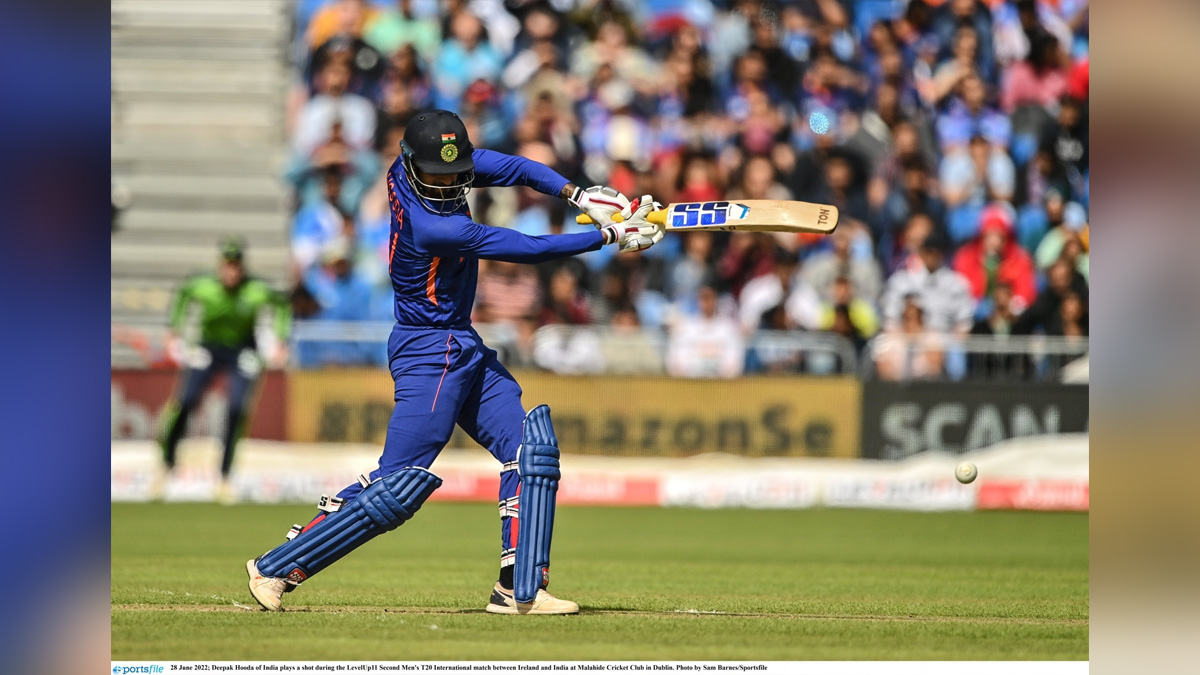 Dublin : All-rounder Deepak Hooda, who smacked a 57-ball 104 in India’s narrow four-run win over Ireland at Malahide, revealed that living in the present and playing the situation better was his mindset on the way to becoming just the fourth batter from the country to score a century in men’s T20I cricket.

“Being a cricketer, what I have learnt lately is that you should not think too far ahead. How many ever series come, just look at it one game at a time. If my work ethics is good, I will be in a good space of mind and I’m going to score, that’s my thinking.

I try to keep it simple, live in the present, play the situation better, and then automatically the outcome will come. Now or later, it will come, that’s how I think,” said Hooda after the match.In both T20Is against Ireland, Hooda showed his effectiveness in the top-order.

On Sunday, as a last-minute opener when Ruturaj Gaikwad had a calf niggle, he remained unbeaten on 47 to help India chase down 109.But on Tuesday, Hooda again showed his top-order prowess, hitting nine fours and four sixes, treating short as well as fuller balls with disdain to reach 104 on a pitch which aided stroke play as India reached 225/7 in 20 overs and defend the huge total by the skin of their teeth.

“The Irish team played really well against us and we enjoyed playing against them in the series. Between the first and second game, I think there was a difference in the pitch. In the first game, the conditions were overcast and the wicket was little damp.

But in the second game, the wicket was very beautiful for batting, which is clear by the way both teams batted. So, I felt the wicket was a very big factor.””I have had never opened in an international game. But being a top-order batsman, you have to cope up to the challenges and you don’t have any option.

If you don’t have any option, then why don’t you go there like a warrior. That’s how I think, so I was ready and things turned in my way. I’m happy about that,” elaborated Hooda.

With Hooda enhancing his reputation as a big-hitter in the T20Is against Ireland though his part-time off-breaks weren’t used, he has kept himself in the reckoning for a spot in India’s squad for the Men’s T20 World Cup to be held in Australia in October-November this year.

But at the moment, Hooda refused to let these thoughts occupy his mind.”To be honest, yes, it is difficult to find a spot in the Indian team and then staying there consistently. But at the same time when you are playing in India colours and logo, that time you never think about yourself, you think about the team.

That’s what I think about when I am on the ground or batting, like ‘How can I contribute to the team and play better in that situation’.””I don’t think more than that; try to keep things simple.

Yes, it’s a matter of pride for me that I’m playing for India, no matter if I’m scoring or not.If I do well and work hard, I will put up a good competition (for being in Indian team).”