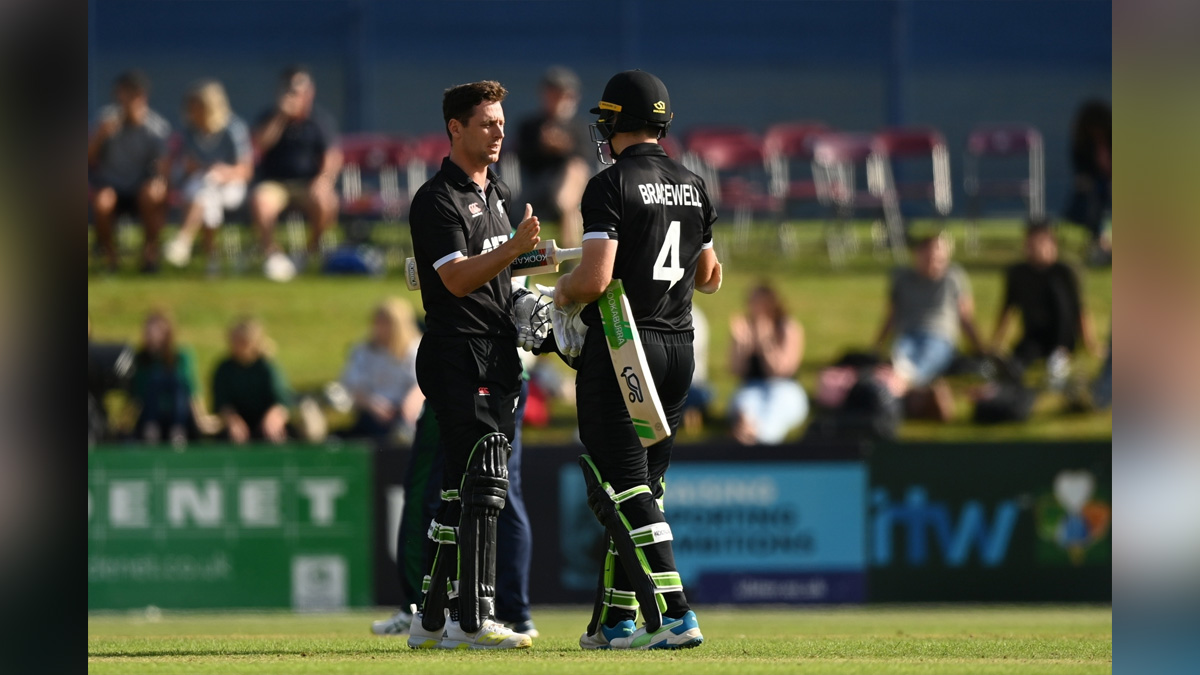 Dublin : Ireland pushed New Zealand hard in the second ODI. But thanks to their hero from the first ODI, all-rounder Michael Bracewell, the visitors clinched a nervy three-wicket victory to clinch the series with an unassailable 2-0 lead.

For Ireland, George Dockrell notched up his ODI-best score of 74 off 61 balls, rescuing the hosts after a top-order wobble. But half-centuries from Finn Allen and captain Tom Latham, followed by an unbeaten 42 from Bracewell secured a victory for New Zealand with more than 10 overs to spare.

Pushed into batting first, Ireland endured a difficult start, losing Paul Stirling in the opening over after Matt Henry pinned the right-hander lbw for a duck. There was no respite from New Zealand’s opening bowlers, as the innings began with three maidens before Henry struck again in the fifth over, castling captain Andrew Balbirnie after misjudging a leave.

Harry Tector and Andrew McBrine had to withstand further pressure from Henry and Jacob Duffy, with Ireland restricted to 19-2 after 10 overs. McBrine then began to find his groove, taking 12 runs off Henry’s sixth over, but Tector fell for four while looking to take the attack to Bracewell on the off-spinner’s third ball of the day.

Bracewell picked up another one quickly, when McBrine was stumped by Latham for 28 in the 19th over, and on a turning pitch, Mitchell Santner took control of the other end as spin became the way to go. Santner used flight and sharp turn to find the outside edge of Curtis Campher and gift a catch to slip.

At 85-5 after 28 overs, Ireland were in deep trouble, but Dockrell fought back with an enterprising innings. Regularly shuffling across his crease, he was particularly adept at opening up the off side against Henry and Duffy.

He reached his third half-century in ODI cricket off just 48 balls to keep the scoreboard moving for the hosts.Dockrell then upped the ante after reaching his half-century, hitting Blair Tickner for three fours off three consecutive legitimate deliveries in the 43rd over, before kicking off the 44th with a straight six off Santner.

But Duffy struck in the next over to end Dockrell’s innings on 74, and while wickets tumbled to end Ireland’s innings prematurely, a fine cameo from Mark Adair (27 not out off 15 balls) took Ireland to 216, a good recovery considering where they had stood prior to Dockrell’s arrival.

In defence of 216, Adair transferred his excellence with the bat to ball, yorking Martin Guptill on first ball of the innings, and went full and straight with the next delivery to send Will Young back for second golden duck in as many balls.

But New Zealand bounced back courtesy of a fine innings from Allen, taking 18 off four Adair deliveries on his way to his maiden ODI half-century. New Zealand reached 100 in the 17th over, but in that same over saw Allen depart, with Campher taking him out for 60.

Campher was responsible for the dismissal of Henry Nicholls, too, launching a direct hit to have the left-hander run out for 17 in the 25th over. Craig Young returned for his second spell and struck with his second ball, getting Glenn Phillips to drag the ball onto his stumps for 16.

Simi Singh trapped Latham lbw on 55 with 40 runs still required. Singh struck again to dismiss Santner in the 37th over, but Bracewell took the visitors over the line and finished off the innings in style with a six over long-on, dancing down the pitch off Singh.
Brief Scores: Ireland 216 in 48 overs (George Dockrell 74, Mark Adair 27 not out; Michael Bracewell 2-26, Mitchell Santner 2-32) lost to New Zealand 219-7 in 38.1 overs (Finn Allen 60, Tom Latham 55; Mark Adair 2-29, Simi Singh 2-51) by three wickets.