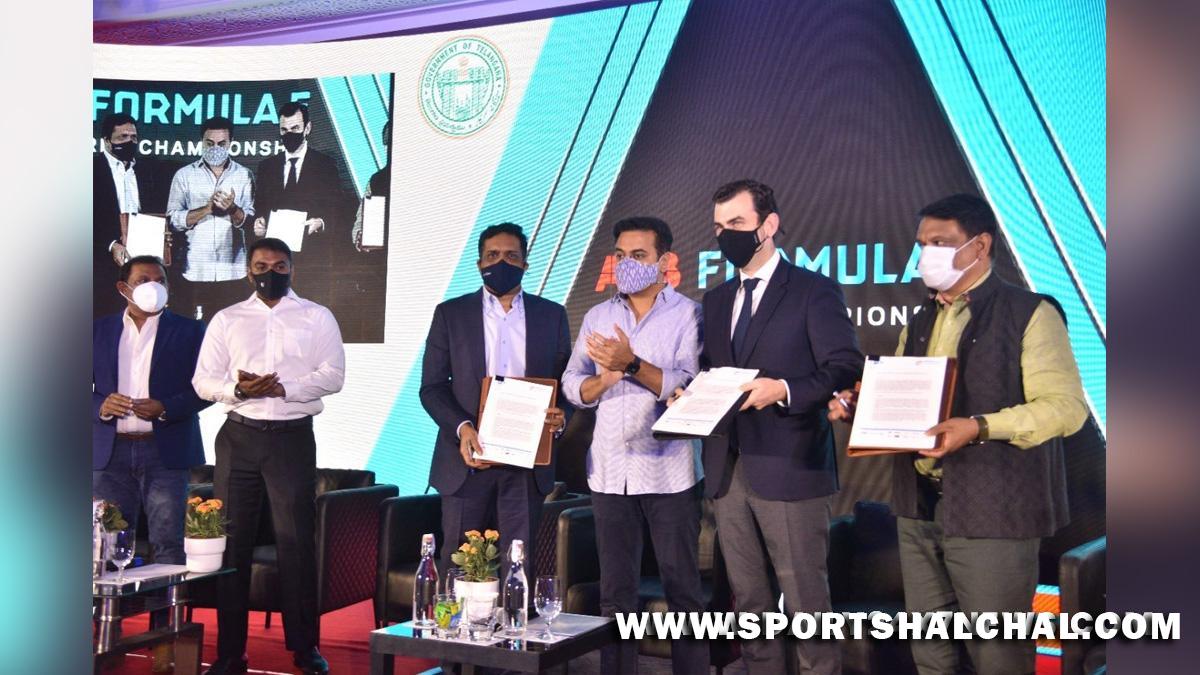 Hyderabad : Hyderabad on Monday achieved the distinction of becoming first Indian candidate city to host Formula E world championship and is expected to host the first race of electric cars between November this year and March 2023.The Telangana government and Formula E Association along with promoter of the event, Greenko signed a letter of intent to make Hyderabad a candidate host city for hosting Formula E race on yearly basis.The tripartite letter of intent was signed in Hyderabad in the presence of Telangana’s Industry Minister K. T. Rama Rao, FIA Formula E Chief Championship Officer Alberto Longo, Greenko Group Chief Executive Officer Anil Chalamasetty, Mahindra Racing CEO and Team Principal Dilbagh Gill and other officials.Hyderabad will join the elite club of Rome, Paris, London, Hong Kong, New York and Berlin. Eighteen cities around the world are hosting the race organised every year by the Federation of Internationale de Automobile.Alberto was impressed with the speed with which the Telangana government moved to sign the letter of intent in less than a month since the idea was mooted. He said he had never seen a government taking decisions at such a speed.

He said Hyderabad would soon become official host city with first race happening between December 2022 and March 2023.Rama Rao said hosting Formula E is the right step to position Hyderabad as electric vehicles hub. “It’s more than a race. It’s the perfect combination of future technology, sustainability and most importantly spirit of innovation,” he said.He hoped that the event will give a big fillip to the city’s image and infrastructure. The state government plans to promote awareness around EVs and encourage innovation by hosting an EV summit parallel to the Formula E championship.Leading EV players and charging infrastructure companies from around the world will be invited for the EV Summit.Stating that India is going to witness revolution of electric vehicles, the minister said Telangana wants to be the epicentre of this revolution.KTR, as the minister is popularly known, said Formula E from FIA family is the fastest growing sport with viewership being more than half of Formula One. He said the popularity of Formula One is increasing every year and it is expected that by the end of the decade, it will equal Formula One in the popularity.He said Hyderabad has everything in place to host the event. “Hyderabad is the most logical and natural choice to host Formula E,” he said.The minister claimed that Telangana has done extremely well in 7.5 years in meeting energy challenges.

The state’s energy output grew four-fold in 7 years and 20 per cent of this came from green energy.He also pointed out that in seven years, the state planted more than 2 billion saplings. More than 80 per cent of these saplings survived, taking green cover to a massive 632 square kilometers in last two years.KTR said among Indian cities Hyderabad has highest greening in last decade. The green cover grew by 147 per cent, beating Delhi, Mumbai, Bengaluru, and Chennai.Telangana’s Director for Electric Vehicles and Energy Storage Systems Sujai Karampuri hoped that an agreement to make Hyderabad an official host city will be signed in next 90 days or much earlier.He pointed out that 60 cities around the world were vying to host Formula E and of them 24 cities are really strong candidates.He said the organisers were impressed with the 2.3 km long race track overlooking Hussain Sagar lake in the heart of the city.Gill, who heads the only Indian team participating in Formula E race, said they will soon have an opportunity to race in front of the home crowd. According to him, Formula E is significant as technology transfer from race car to roll car happens in 18 months.